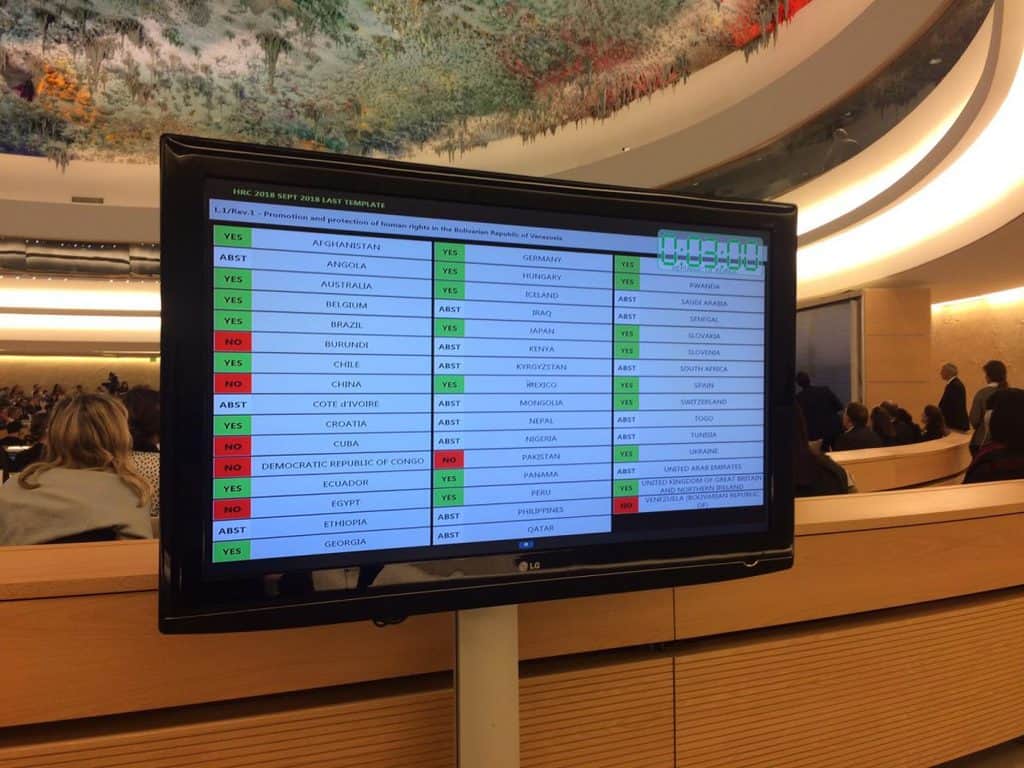 September 27, 2018 — Today’s UN draft resolution on Venezuela, adopted by the 47-nation Human Rights Council by a vote of 23 to 7 with 17 abstentions, fails to name rights violations or attribute any responsibility to the Maduro government, “squandering a golden opportunity to finally hold the Maduro regime to account,” said Hillel Neuer, executive director of UN Watch, the Geneva-based non-governmental human rights organization.

The resolution constitutes “one of the most feeble texts on a country situation ever to be adopted in the council’s history,” said Neuer.

UN Watch, a leading advocate for Venezuelan dissidents at the United Nations, raised its concerns during a UN consultation on the draft text that was held by Peru, Mexico and Chile on September 13th. The resolution’s main sponsors include 10 Latin American countries and Canada.

“Though some argue that the sponsors needed to water down the resolution to win a majority in a council populated by numerous non-democracies close to Caracas, the result is an embarrassing text that covers up the Maduro regime’s gross abuses,” said Neuer. “Better that the UN say nothing than distort the suffering of millions of Venezuelans.”

UN Watch had urged the sponsors to look to the group’s own draft resolution on Venezuela, officially circulated by the UN to delegates last year, as a model.

• The resolution mentions “serious human rights violations,” but breaks with standard practice, as used for example in resolutions on Syria and North Korea, by failing to identify what they are, with no mention of arbitrary arrests, jailing opposition leaders, or killing peaceful protesters. There is not even a call on Venezuela to release its hundreds of political prisoners.

• The resolution mentions violations but mysteriously avoids attributing any responsibility to the government for the violations. We have a crime with no perpetrator. Worse, the text’s amorphous reference to a “crisis” allows Venezuela’s apologists to blame others for the abuses.

• The resolution calls for a report by the High Commissioner, but the office already published two reports on its own initiative, without needing any written mandate. If anything, the resolution should have created an independent and international Commission of Inquiry — a remedy that was expressly requested by former High Commissioner Zeid in March.

• Worse, diplomats fear the resolution creates a negative precedent by implying that the High Commissioner can no longer initiate reports without a council mandate.

• The resolution was not submitted under Agenda Item 4, the appropriate rubric for country violations of human rights — under which Iran, North Korea, Burundi and Myanmar are addressed — but instead under Agenda Item 2, which deals with the High Commissioner. This signals that the council does not consider the situation in Venezuela to be grave, but more of a “technical” matter.

• The resolution fails to address accountability for perpetrators or to support the call by the OAS expert panel to refer Venezuela to the ICC for investigation into possible crimes against humanity, formally endorsed yesterday by Canada and five South American states.

• The resolution fails to call for the suspension of Venezuela from the council, a remedy against gross abusers provided in Article 8 of the council’s founding charter, UNGA Resolution 60/251.

• The resolution fails to call for an Urgent Debate or a Special Session, which would have reflected the human rights emergency in Venezuela.

PrevPreviousRussian justice minister confronted by dissident in UN rights debate
NextUNRWA suddenly complains of Gaza protests when they're the target, as European managers flee to IsraelNext