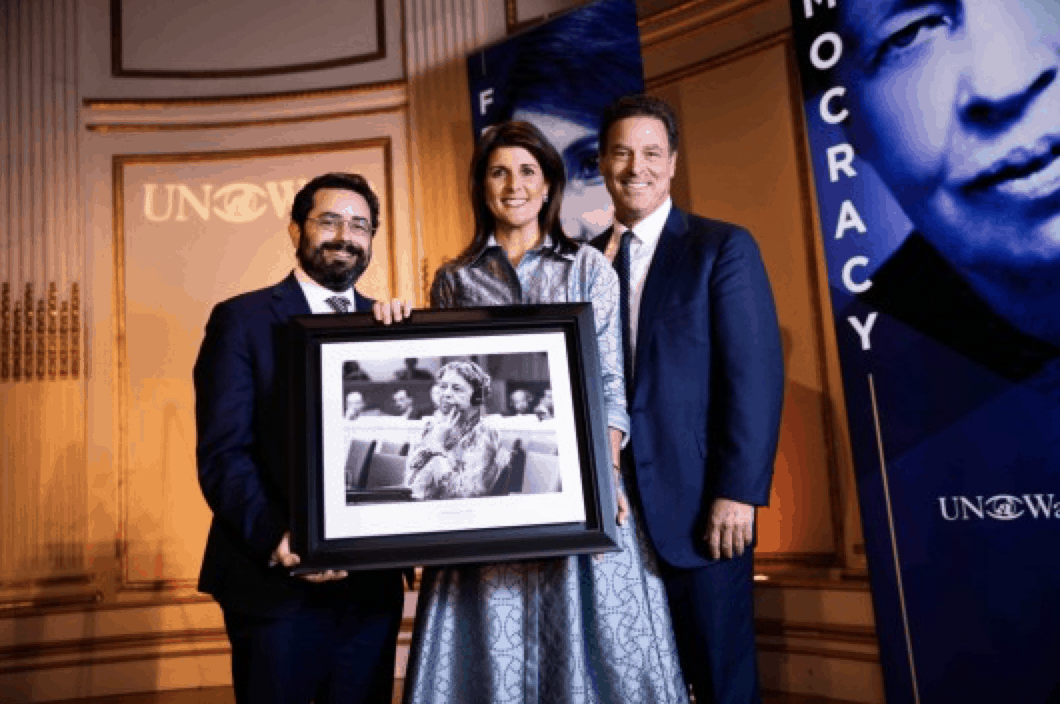 Hundreds gathered at The Plaza Hotel on December 5th for what guests described as “an amazing and impressive evening” with “fabulous speakers and honorees,” to celebrate the accomplishments of UN Watch at its Inaugural New York Gala Dinner.

Before an audience of eminent figures including diplomats, writers and community leaders, the non-governmental human rights group presented its 2019 Eleanor Roosevelt Award to Ambassador Nikki Haley, the former U.S. representative to the United Nations, who delivered the keynote speech.

Chaired by UN Watch board member Anthony Meyer, the gathering was also addressed by Ambassador Diego Arria, the former U.N. envoy of Venezuela and President of the Security Council, now a member of UN Watch’s International Advisory Board, as well as by UN Watch Executive Director Hillel Neuer.

The screening of dramatic videos showing UN Watch’s latest accomplishments received rave reviews from the audience, comprised of more than 300 guests including UN Watch friends and supporters who traveled from as far as Miami, Montreal, and Sydney, Australia, to show their solidarity with the organization.

To see a photo gallery from the evening, click here. 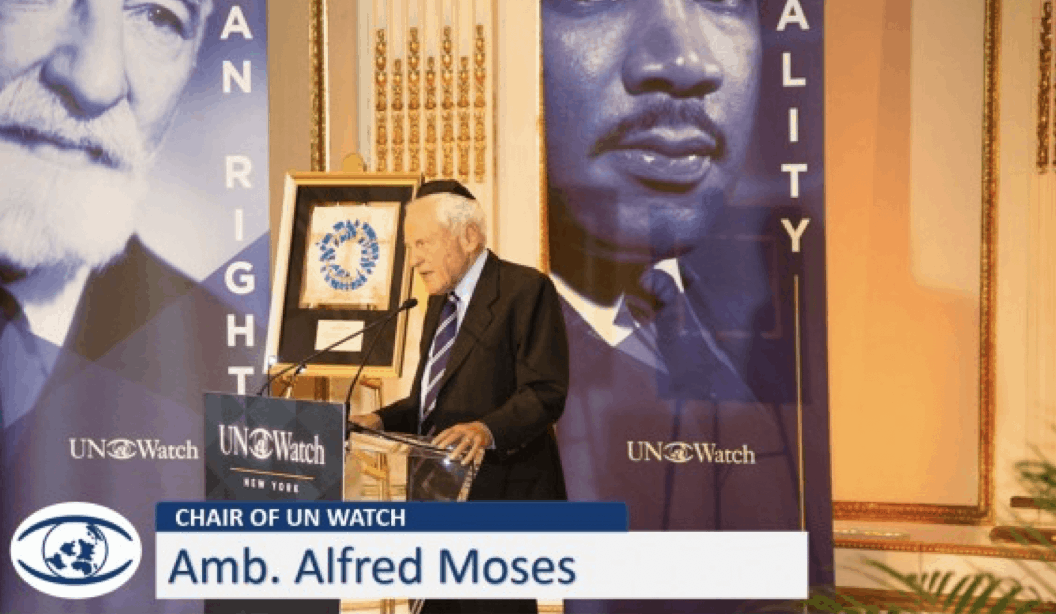 “Tonight, on the occasion of his 18 years of devoted service as the Chair of UN Watch, we express our deep gratitude to Alfred Moses — a distinguished diplomat, an exemplary public servant, counsel to presidents, and a lawyer’s lawyer — for his inspired leadership, his generosity, his wisdom, and his stunning achievements,” said Prof. Cotler.

“Alfred has brought a repository of expertise to his role as Chair of UN Watch, which has found continuing expression in his encounters with government leaders, foreign ministers, UN officials, civil society and the like.” Click here for video

“We’ve got to keep slaying the biblical Goliath because it is a never-ending battle,” responded Ambassador Moses. “Human rights can never be taken for granted.”

“Irwin quoted from Hillel, ‘If not now, when?’ Good aphorism. But Hillel also said, ‘If I am not for myself, who will be for me? If I am only for myself, what am I?'”

“This sort of captures the whole Jewish ethos: the particularism, the defense of ourselves as Jewish people, a right to be different, to profess our faith and our culture, to recall and celebrate our history. But also, to recognize that we live in a world of which we are a very small part. We are 15 million out of over 6 billion. Most people do not know that we’re a very small number, very few. But we make a difference. And if we make a difference, it’s because we stand for what is right and just. And that is everything.” 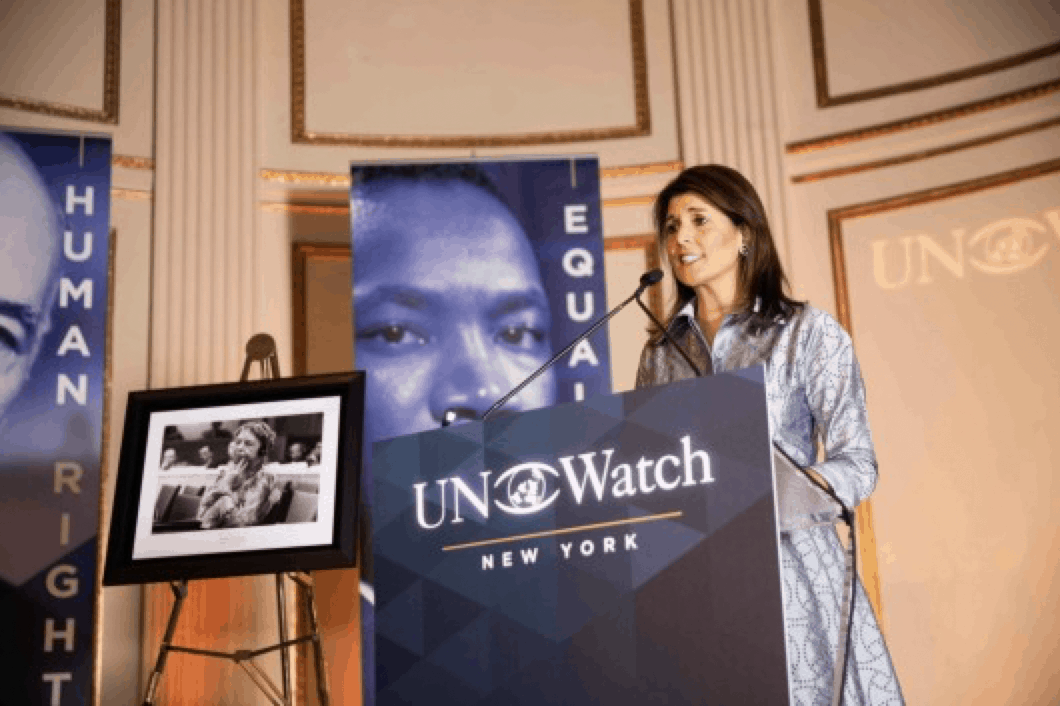 I’m honored to receive this award tonight.  Hillel and UN Watch were an irreplaceable source of facts and moral clarity when I was at the United Nations. Hillel is another guy you want in the foxhole with you at the UN.  He’s fighting the good fight, every single day.

I’m grateful to know he and his colleagues found me as reliable a voice for human rights as I found them. And I know our work will continue. I will continue to have your back, Hillel.

There is another, more basic reason why I am pleased to be honored by UN Watch tonight.  Among the many, many organizations devoted to monitoring the United Nations, UN Watch is virtually alone in its dedication to what passes for a revolutionary idea at the UN.  They judge the United Nations by, quote, “the yardstick of its own charter.”

“The yardstick of its own charter.” These are words that cause people to break out in a cold sweat at Turtle Bay.

The United States is a member of the United Nations because we believe in its purpose — the promotion and protection of peace, security and human rights.  We believe in holding the UN to the standard of its founding principles.  But you don’t have to spend too much time at the UN to see that what causes it to fall short of its principles isn’t just a few isolated people or a few isolated actions.

There is a culture at the United Nations that causes it, time and again, to fail to live up it its charter.  It’s a culture of hypocrisy, entitlement, and unaccountability.

It’s also a culture of bullying.

I know something about bullying.

When I grew up, we were the only Indian family in a small southern town in South Carolina.  We weren’t white enough to be white, or black enough to be black.

My parents were immigrants.  My father wore a turban. He still does to this day.  My mother wore a sari.

The people in our town didn’t know who we were, what we were, or why we were there.

There were times when I was bullied growing up.

So I know it when I see it.  And I’ll never forget the first time I personally saw the culture of bullying at the United Nations.

Every month at the Security Council, there’s a session devoted to the Middle East.  I came to refer to it as the monthly Israel-bashing session. This had gone on for decades.

I was shocked at what I witnessed.

I came out of that first session and publicly said, if we want to talk about security in the Middle East, we should talk about Iran, or Syria, or Hezbollah, or Hamas, or ISIS, or the famine in Yemen.  There are about ten major problems facing the Middle East, and Israel doesn’t have anything to do with any of them.

Just about every month after that, I spoke about something other than Israel.  I can’t say that we solved the problem, but I can say that several other countries followed our lead.  What used to be a monthly Israel-bashing session, now, at least, has a little more balance.

“Rally for Equal Rights” at the United Nations