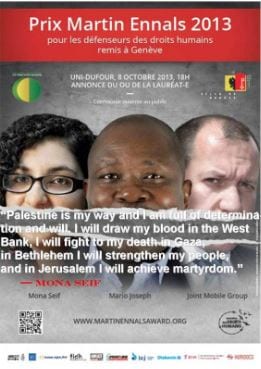 In a letter to High Commissioner Pillay, the non-governmental group UN Watch urged her to make clear that she condemns the repeated statements by nominee Mona Seif that opposed calls by Amnesty and Human Rights Watch for Hamas to stop rocket attacks on civilians, which she justified as “resistance.”

I urge you, as the person giving out tonight’s Martin Ennal Award, to make clear your opposition to the violence and terrorism advocated by Final Nominee Mona Seif.

Mona Seif was nominated specifically for her tweets. Yet her tweets also say the following: 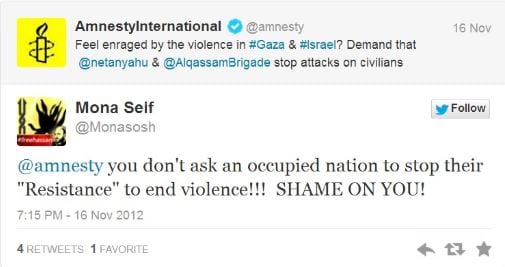 In other words, Ms. Seif not only engaged in public incitement to the blowing up of pipelines, but attacked calls to end violence against Israeli civilians as “shameful.” In endorsing the actions of the Al Qassam Brigades, she was effectively advocating, supporting and legitimizing attacks such as their launch of Fajr 5 missiles at the city of Tel Aviv.

The United Nations Charter is dedicated to the promotion of peace. Mona Seif seeks to violently destroy peace. Unless you clarify your opposition to her many statements supporting violence, your presence tonight is liable to send a terrible message.

As a Princeton college student wrote:“Human-rights organizations should be at the forefront of advancing egalitarian ideals. This means withholding international human rights awards from activists, like Ms. Seif, who have publicly voiced blatantly violent views.”

We urge you to condemn Mona Seif’s statements that violate the right to life, oppose peace and support terrorism.
Sincerely,