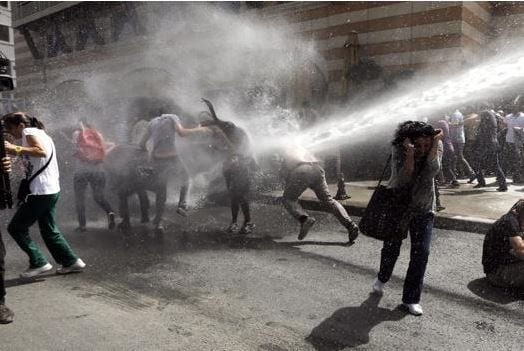 GENEVA, May 31, 2013 – In reaction to this morning’s brutal Turkish police action that targeted peaceful protesters and journalists, creating scenes of chaos on the streets of Istanbul, a Geneva-based human rights group is demanding an urgent debate of the United Nations Human Rights Council, now in session, in a letter (see full text below) sent today to Council President Remigiusz Achilles Henczel, and UN rights chief Navi Pillay.

“The UN must make it clear to the government of Prime Minister Erdogan that if Turkey truly aspires to be a model for others in the turbulent Middle East, it must end its repeated use of police brutality, excessive force and disproportionate measures, and stop trampling on the UN-guaranteed freedoms of speech and assembly of peaceful protesters, whose only crime this time was opposing the uprooting of trees,” said Hillel Neuer, executive director of the Geneva-based human rights group UN Watch.

Neuer added that “Turkey remains the world’s biggest prison for journalists, with reporters being the canary in the coal mine concerning freedom of speech for all.” 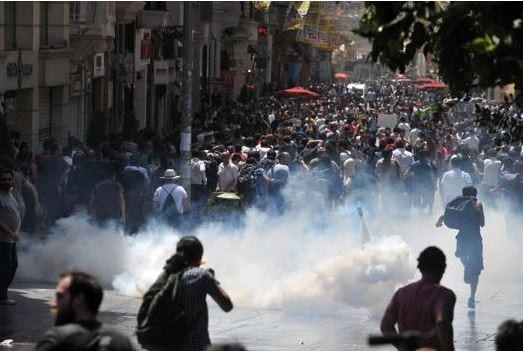 UN Watch is shocked by the Turkish riot police action in the early hours of this morning, when they fired tear gas canisters and used water cannons to violently crush a peaceful sit-in by hundreds of people trying to prevent trees from being uprooted at an Istanbul park, causing the injury of at least 12 people.

We urge you to call for an Urgent Debate of the UN Human Rights Council, when it reconvenes on Monday to begin consideration next week of human rights situations that require the Council’s attention.

While Turkish Interior Minister Muammer Guler announced that authorities would investigate, this pledge appears inadequate, insufficient, and insincere, given that he simultaneously defended the crackdown, saying officers were “carrying out their duties” against an “illegal occupation” of the park.

We are alarmed by reports that at least two people—including a journalist—were hit in the head by tear gas canisters. Two opposition legislators were among several hospitalized after being affected by the gas.

According to credible reports, the injured journalist, Ahmet Sik, and others were deliberately targeted by police. A Reuters photographer was also injured.

Excellencies, today’s police brutality in Istanbul is only the latest in a series of aggressive and illegal measures cracking down on peaceful protests, with Turkish police routinely resorting to excessive and disproportionate force in breach of the international human rights covenants and commitments to which Turkey is a signatory.

We urge you to take action and thereby uphold the Council’s obligation to promote and protect universal human rights.