UN Watch today called on the jury of the Martin Ennals Award for Human Rights Defenders, comprised of Amnesty, Human Rights Watch and eight other NGOs, and chaired by Hans Thoolen, to cancel its nomination of Mona Seif, an Egyptian activist who openly advocates terrorism and war crimes, as a top contender for the 2013 prize.

She openly incites to violence against civilians, terrorism and war crimes:

– On July 6, 2011 — among several times — Mona Seif advocated the blowing up of pipelines exporting gas to Israel.

– On November 6, 2012, when Amnesty International tweeted a “Demand that @netanyahu & @AlqassamBrigade stop attacks on civilians,” Mona Seif rejected the call, saying “you don’t ask an occupied nation to stop their “Resistance” to end violence!!! SHAME ON YOU!”

People of Sainai, Our gas is being pumped again to Israel, Plz do something about it #FuckIsrael

We the Egyptian ppl DO NOT WANT OUR GAS TO BE EXPORTED TO ISRAEL.Sinai ppl are our heroes everytime they blow up the pipelines#FuckISrael — Mona Seif (@Monasosh) July 6, 2011

@amnesty you don’t ask an occupied nation to stop their “Resistance” to end violence!!!SHAME ON YOU!

An occupied nation fighting back but HRW asks :”Palestinian Groups Need to Halt Rocket Attacks on Civilians” SHAME ON YOU…#FuckIsrael

Stop the madness! Share this image if you want an arms embargo on all sides #Israel #Hamas #Gaza twitter.com/amnesty/status…

She is unrepentant for these tweets for terror, and is now doubling down:

Just a note: all my anti israel tweets were written in English precisely so that the international community celebrating our 1/2 — Mona Seif (@Monasosh) April 30, 2013

revolution understands that we support the resistance of the palestinian nation against israel. I didn’t fool anyone or hide my thoughts 2/2

i support a nation’s right to resist occupation! Sending me tweets calling me a terrorist wont change the fact that real terrorist is Israel — Mona Seif (@Monasosh) April 30, 2013

** A longer list of Mona Seif’s  anti-peace and pro-terror tweets are on Storify here. 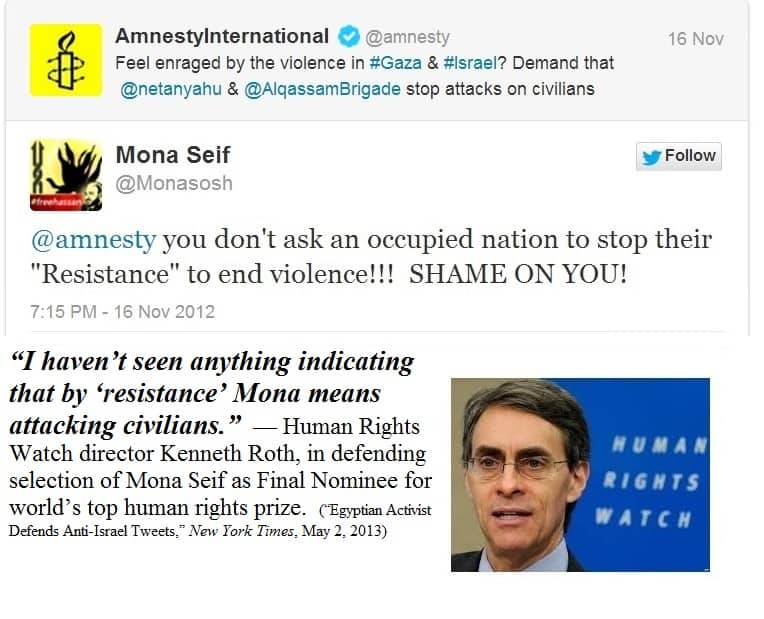