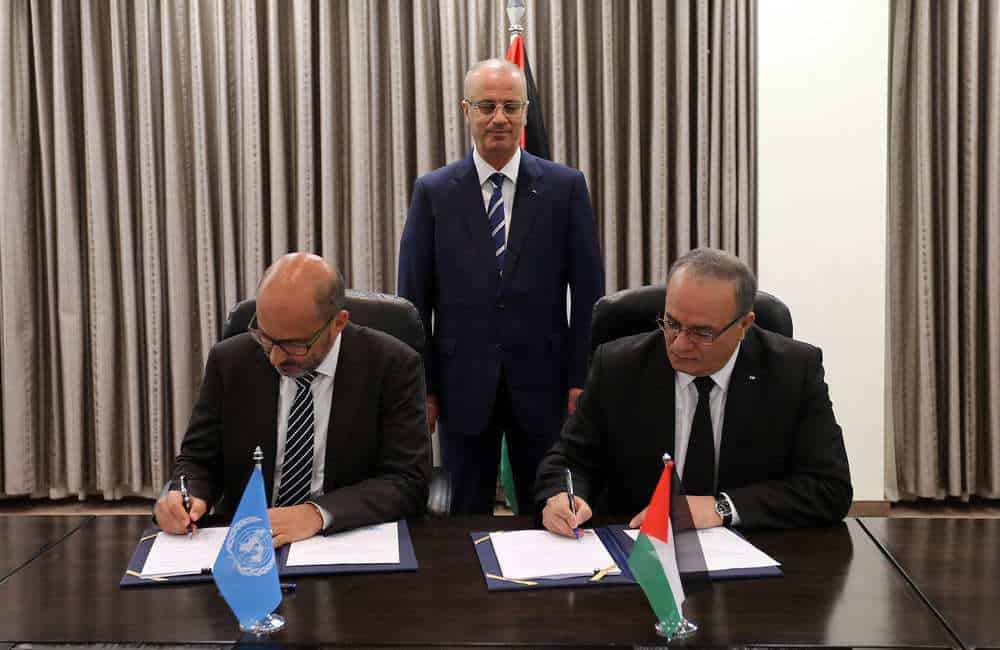 GENEVA, October 29, 2017 – An independent monitoring group is asking UN chief Antonio Guterres to explain why the world body is planning to spend $18 million across 16 different agencies to fund Palestinian lawfare campaigns against Israel in “international accountability mechanisms” — a reference presumably to the UN Human Rights Council and the International Criminal Court.
According to a document signed between the UN and the “Government of Palestine,” that “presents the strategic programming framework of the United Nations system in the Occupied Palestinian Territories” for 2018-2022 — to go into effect on January 1, 2018 — the UN will provide “training, capacity-building and technical advice” to ensure that “Palestinian victims” and institutions make effective use of “international accountability mechanisms” in order to “hold Israel accountable” for its “violations under international law.”
Out of $1.3 billion in total spending, at least $18 million is for anti-Israel lawfare.
The UN will “increase its support” for Palestinian institutions and “Palestinian victims of violations” to “monitor, advocate and seek legal recourse for violations by the occupying power,” meaning Israel.
While the document, reported first by Israeli news site nrg, makes passing reference to the need for Palestinian elections, the UN nowhere refers to or presumes any “Palestinian violations.”
Notably, the $1.3 billion is not for humanitarian assistance, but rather “focused on development programming,” which includes as its first priority the “core programming area” of “supporting Palestine’s path to independence.”
The 16 signatory UN agencies — which include the U.N. human rights office (OHCHR), UNESCO, UNRWA, OCHA, UNDP and UN Women — promise “to uphold accountability” against Israel by “strengthening capacities to document violations” and Palestinian groups’ “ability to advocate effectively for rights to be respected.”
The UN will also strengthen its own advocacy on “the impact of Israeli violations,”  including through “joint activities that clearly communicate the effect that the occupation and breaches of international law have on the ability of Palestine to develop.”
REACTION BY UN WATCH
“There is no other example or precedent of the UN funding, training, and advising one side of a conflict to pursue legal advocacy against another side within UN bodies and other international mechanisms,” said Hillel Neuer, executive director of UN Watch, a Geneva-based monitoring group.
“Mr. Guterres has said that the State of Israel needs to be treated as any other state, with exactly the same rules. Well, needless to say, the UN does not fund, train or advise Palestinian victims of Palestinian violations, or Israeli victims of Palestinian stabbings, car-ramming attacks and shootings, to pursue legal recourse.”
“Nor does the UN fund, train or advise Kurdish victims of Turkish, Iraqi or Iranian human rights violations, Yemeni victims of Saudi and Iranian violations of international law, or Tibetan victims of Chinese violation of human rights.”
“For some reason, however, when it comes to Israel, the UN development agencies cross the bright red line from humanitarian assistance to political advocacy.”
“We call on the United States, Canada, Australia and other democracies to ensure that their taxpayer contributions are not being misused to undermine UN institutions through an escalation of politicized attacks on Israel.”
“It is unacceptable that agencies such as UN Women are misusing U.S. taxpayer contributions to fund and train Palestinians to make submissions to the Human Rights Council to the effect that when Palestinians men beat their wives, it’s Israel’s fault.”

No joke: @UNHumanRights to help spend $1.3 billion taxpayer dollars for Palestinians to advocate against #Israel before @UNHumanRights fora. pic.twitter.com/SPmOXFyBw2

At least U.S. taxpayers not paying for this: #UNESCO to help spend $1.3 billion for PLO to advocate at. . . #UNESCO.https://t.co/TuyQyTtVki pic.twitter.com/EAhYOZ1kq8

The UN agencies signatory to the new UN Development Assistance Framework (UNDAF) are the following:

Excerpt from the report:

The UNCT [UN Country Team] will focus its interventions on providing support for Palestinian institutions, civil society and individuals to increase the effective use of international mechanisms to uphold accountability.
This will be built on increasing knowledge of rights and mechanisms, strengthening capacities to document violations and their impact and on sharpening the ability to advocate effectively for rights to be respected. …
The UN will increase its support for Palestinian institutions (state and non-government) and Palestinian victims of violations to effectively monitor, advocate and seek legal recourse for violations by the occupying power.
This will include training, capacity-building and technical advice to ensure that Palestinian victims and institutions are equipped with the knowledge and tools to effectively access international accountability mechanisms in order to hold Israel accountable for its violations under international law. It will also aim to strengthen the capacity of Palestinian organizations to advocate effectively for the rights of Palestinians in the occupied territory.
The UN will also strengthen its own advocacy on the impact of Israeli violations on Palestine’s development prospects, including through joint activities that clearly communicate the effect that the occupation and breaches of international law have on the ability of Palestine to develop economically, socially, environmentally and politically, including the responsibility of Israel vis-à-vis Palestine’s implementation of the SDGs.

The UN produced the following FAQ:

UNDAF for the State of Palestine 2018-2022: Frequently Asked Questions

1. Which UN agencies participated in the UNDAF?
Sixteen UN agencies with offices in Palestine and four non-resident agencies are signatories to the UNDAF. These include FAO, ILO, OCHA, OHCHR, UNDP, UNESCO, UNFPA, UN-Habitat, UNICEF, UNODC, UNOPS, UNRWA, UNV, UN Women, WFP, WHO as well as four non-resident agencies ITC, UNEP, UNIDO and UNCTAD.
2. How did we get to this point?
The process started with the preparation of a Common Country Analysis (CCA) for Palestine which is the UN Country Team’s (UNCT) diagnosis of Palestine’s development challenges. The CCA provided the analytical basis for the UNDAF. Consultations were undertaken bilaterally with line ministries at the technical level, civil society, and other development actors in Palestine during the research phase of the CCA. The Strategic Priorities of the UNDAF itself were first derived by locating them in the priorities of the National Policy Agenda (NPA). Several workshops were conducted in Ramallah and Gaza to consult with the Government, civil society and other development actors to refine and validate the priorities and outcomes. Extensive consultations were also undertaken bilaterally by UN agencies with their counterparts in the respective line ministries to formulate the outcomes and indicators. PCBS in particular was consulted on the choice of indicators and a concerted effort was made to align the indicators with SDG indicators relevant to Palestine.
3. Does the UNDAF cover humanitarian assistance?
No. Humanitarian assistance is not included in the UNDAF, which is focused on development programming instead (humanitarian assistance is captured in the ‘Humanitarian Response Plan’). However – given the importance of connecting the two – the current UNDAF offers multiple bridges between humanitarian and development interventions, primarily through the idea of ‘resilience’. The linkages are enunciated under Strategic Priorities 3 and 4 and especially outcome 4.3 “Outcome 3: Vulnerable Palestinian communities and institutions are better equipped to cope with protracted threats and shocks”.
4. How were the four strategic priority areas selected?
The four strategic priority areas are: 1) supporting Palestine’s path to independence, 2) Supporting equal access to accountable, effective and responsive democratic governance for all Palestinians, 3) Supporting sustainable and inclusive economic development, and 4) Social development and protection. These are deliberately aligned with the three pillars of the Government’s National Policy Agenda, and informed by the Common Country Analysis and extensive consultations with government counterparts, including line ministries and technical offices, and civil society.
5. Does the UNDAF cover all of the work of the UN development agencies?
Or is this in addition to the agencies’ programming? Almost. The UNDAF captures all of the planned interventions by the UN Development Group in the four priority areas enumerated above. It captures joint-programs in these areas as well as specific interventions that will be undertaken by agencies individually. Some activities may well be undertaken outside these priorities nevertheless.
6. Does UNRWA participate in the UNDAF?
Yes. But in a manner different from other UN agencies. UNRWA provides a number of parastatal services including the provision of basic healthcare, education and social safety net services to the nearly 2 million registered Palestinian refugees in the oPt; these core activities of UNRWA are not reflected in the UNDAF. On the other hand, activities that go beyond these core functions such as human rights reporting and advocacy , mitigating effects of violence on children, working on school curricula and school construction, water infrastructure or livelihoods support all of which naturally have a significant impact on development, are reflected under the UNDAF. UNRWA’s humanitarian activities are not included in the UNDAF either, but rather in the Humanitarian Response Plan.
7. How much funding will be required to implement the UNDAF?
A series of substantial outputs have been identified that are needed to achieve the outcomes articulated in the UNDAF. Each of these outputs have been roughly costed – bringing us to an estimated annual budget for the UNDAF of approximately $250 million. This figure is close to the actual annual spending of the Development Group agencies over the last few years. And it is about half of the annual budget targets of our earlier UNDAF which were approximately $500 million annually. This reduction is a result of greater focus in the UNDAF design, greater discipline in identifying the UN’s comparative advantage, and a more realistic assessment of what funding might be available for the UN’s development efforts in OPT.
8. Where will the money come from?
About 25% of the estimated resources needed are already secured either from core budgets of the agencies concerned or existing funding commitments by donors. The remainder will still need to be mobilized over the years ahead. The budget details are outlined in the Common Budgetary Framework section of the UNDAF.
9. What happens next?
Once the UNDAF is approved, it will be signed with the Government. Implementation will formally begin on 1 January 2018 however preparatory work will be launched immediately. In the interim, each agency will in parallel approach their respective Governing Boards for approval of their part of the UNDAF. Each will also prepare their own annual workplans with their respective counterpart agencies as normal. The outputs and outcomes identified in the UNDAF will then be the common thread across all of these efforts. The UNCT will report annually on results and a joint Government-UN Steering Committee will oversee the roll-out of the UNDAF over the coming 5 years.