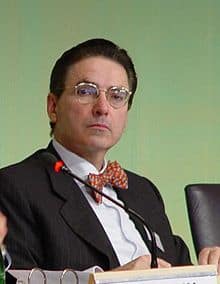 U.N. Expert Alfred de Zayas, in his own words:

• The Old Testament is characterized by “cruelty” and “profound unreligiousity,” its patriarchs “equipped with divine legitimacy and justification to take our promised Lebensraum by force.” (Original source now deleted by Zayas — see instead Alternative Source.)

• Churchill and Roosevelt connived at “a form of genocide” against the Germans.

•  The World War II Allies who fought Nazi Germany should have been prosecuted for “barbarous” and “gruesome” crimes; the Nuremberg Court that judged Nazi war criminals had “hardly any legitimacy.”

• “Nuremberg was an exercise in hypocrisy. A continuation of hate and war… a corruption of legal norms and procedures, a pollution of philosophy, a truly Pharisee tribunal.” Original source now deleted by Zayas Alternative Source

•  “Israel emerged out of terrorism against the indigenous population” and its representatives should be denied U.N. accreditation. Source

• America bears “responsibility for the destabilization of… countries in the Middle East.”

• “Moses had such a rough time bringing the Jewish people across the Red Sea because half of them were busy picking up pretty shells.” Source

GENEVA, Dec. 19 – Tomorrow, the United Nations General Assembly will adopt a resolution ratifying all of the 2012 resolutions and decisions of its subsidiary, the 47-nation Human Rights Council.

While a handful of these decisions were good, many were despicable. One stands out for its ignominy: the appointment of a top official whose life’s work—authoring books on World War II that make Germans the victims and the Allies the war criminals—has made him a hero to Holocaust deniers.

Alfred de Zayas was appointed in March as the council’s “Independent Expert on the promotion of a democratic and equitable international order,” an anti-Western mandate created by Cuba’s Communist regime.

Inexplicably, Zayas was unanimously recommended by a U.N. committee that included British Ambassador Peter Gooderham, who was supposed to effectively represent the interests and values of Western democracies such as Britain, France, Germany and the United States.

To undo this wrong, tomorrow U.S. Ambassador Susan Rice should lead the world’s democracies in calling for a vote on the omnibus resolution—which includes the appointment of Zayas—and vote No.

Ambassador Rice should also take the floor and explain to the U.N. and the world why America and all decent people categorically object to an appointment that contradicts the principles of the U.N. and its founding history as the anti-Hitler alliance. Click here to send an email urging action.

The evidence, however, shows otherwise.

• Dr. Bernward Dörner, German historian specializing in antisemitism: Zayas ignores decades of research in his quest to absolve the Germans of having known about the Holocaust, and his evidence and reasoning are faulty. (Source: Frankfurter Allgemeine Zeitung, April 18, 2011, review of Zayas’ most recent book Völkermord als Staatsgeheimnis – Vom Wissen über die “Endlösung der Judenfrage” im Dritten Reich (Genocide as State Secret – on Knowledge about “the Final Solution to the Jewish Question” in the Third Reich).

• Professor Frank M. Brucher, in 1993 German Studies Review article: Zayas “makes no attempt to integrate his work with that of existing historiography on World War II, Nazi Germany or war crimes in general.”

• Rainer Ohliger, German social scientist and historian, reviewing Zayas’ book “A Terrible Revenge” in 1997 German historians’ forum: The “murderous Nazi-German foreign policy that was in place between 1938 and 1945. . . is starkly underemphasized [by Zayas’] book and arouses suspicion that we are dealing with a historical revisionist work.”