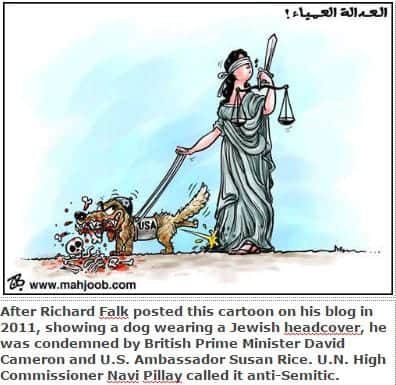 GENEVA, Oct. 25 — UN Watch, a non-governmental Geneva-based monitoring group, commended the British government for protesting to the U.N. over “anti-Semitic” remarks made by one of its top officials, and urged the U.S., France, Germany and other democracies to do the same today during the U.N. General Assembly’s annual debate with Richard Falk, the Human Rights Council’s Special Rapporteur mandated to investigate “Israel’s violations of the bases and principles of international law.”

Falk had collectively accused “the organized Jewish community” of responsibility for war crimes, and provided the cover endorsement of a virulently anti-Semitic book, “The Wandering Who,” which has been condemned as racist by Electronic Intifada founder Ali Abunimah and other Arab activists.

In a firm UK demarche delivered at a meeting with the senior leadership of the U.N. Office of the High Commissioner for Human Rights, representatives of the British Foreign Office expressed London’s “serious concerns” over “unacceptable” statements made by Mr. Falk.

These were first outlined by UN Watch in an appeal sent this summer to Prime Minister David Cameron, who had committed to closely watch Falk’s actions and comments after the latter posted an anti-Semitic cartoon (right) in 2011. Concerns were also raised with the British Government by UK Jewish institutions through the Jewish Leadership Council.

“For the U.N. human rights system to be credible in the fight against racism, its own high representatives must not be allowed to incite hatred and racial discrimination with impunity,” said UN Watch executive director Hillel Neuer.

“If anti-Islamic acts by completely marginal and unknown figures merit a chorus of sharp and prompt condemnation by world figures, high U.N. officials, and diplomats,” asked Neuer, “should not anti-Jewish acts by a U.N. mandate-holder—who speaks on human rights from the world body’s podium and with its imprimatur—merit the same, and so much more?”

With Mr. Falk’s endorsement on the front cover, the author boasts about drawing “insights from a man who . . . was an anti-Semite as well as a radical misogynist,” and a hater of “almost everything that fails to be Aryan masculinity” (p. 89-90). He declares himself a “proud, self-hating Jew” (p. 54), writes with “contempt” of “the Jew in me” (p. 94), and describes himself as “a strong opponent of … Jewish-ness” (p. 186). Harvard law school professor Alan Dershowitz wrote in The New Republic that the author’s writings, both online and in his new book, “brim with classic anti-Semitic motifs that are borrowed from Nazi publications.”

“Because Falk answers only to the U.N. member states, we call on America, as a leading member and supporter of the Human Rights Council, to assume its responsibility and speak out against Falk’s racism, as Britain has done.”

1. “Trusting Khomeini”: Last week, Falk justified his 1979 New York Times op-ed titled “Trusting Khomeini.” Days after Ayatollah Khomeini seized power in 1979, Falk reassured the world that “the depiction of him as fanatical, reactionary and the bearer of crude prejudices seems certainly and happily false.” Khomeini’s entourage, wrote Falk, had “a notable record of concern for human rights.” Indeed, the ayatollah’s “new model of popular revolution” offered the world “a desperately-needed model of humane governance for a third-world country.”
In response, the Times’ own Anthony Lewis wrote a column entitled “Trusting Illusions.” Falk’s assurances, said Lewis, were “outstandingly silly.” His analysis was “distorted,” he added. “No one should have expected Iran under Ayatollah Khomeini to to be comfortable liberal — or stable.”

2. Endorses Biased Mandate: In 2008, after Falk claimed Israel was planning a “Palestinian Holocaust,” Bashar al-Assad’s Syria, Muammar Gaddafi’s Libya and other dictatorships installed him as the council’s monitor on Palestine. His mission is so biased that Falk tries to obscure it. He calls himself the Special Rapporteur on “the situation of human rights in the Palestinian territories,” implying a regional jurisdiction examining all sides. Yet his actual mandate is to investigate “Israel’s violations.” Not Hamas, not Fatah, not Islamic Jihad—only Israel.

3. So Pro-Hamas, Fatah Wanted Him Fired: Falk uses his UN post to legitimize Hamas, ignoring its brutalization of fellow Palestinians, rocketing of Israeli civilians and incitement to genocidal murder of Jews. Falk’s reports whitewash Hamas as the “elected government” of Gaza, omitting to mention that it seized power by throwing opponents off rooftops. His backing of the terrorist group is so extreme that even the Palestinian Authority urged his removal, viewing him as a “partisan of Hamas.”

4. Posted Anti-Semitic Cartoon: Falk last year published a cartoon showing a dog, with “U.S.A.” written on its body and wearing a Jewish headcover, devouring a bloody skeleton and urinating on a female figure symbolizing justice. UN rights chief Navi Pillay found the posting “anti-Semitic” and “objectionable.” Falk was condemned by British Prime Minister David Cameron, Ambassador Susan Rice, and many others. Eventually, after initially insisting he did nothing doing wrong, Falk reluctantly apologized — to Jews, and animals.

5. Ban Ki-moon condemned Falk’s 9/11 Conspiracy Theories: Falk is one of the world’s top 9/11 conspiracy theorists, endorsing those who accuse the U.S. government of orchestrating the destruction of the Twin Towers as a pretext to launch wars. Falk promotes the writings of David Ray Griffin, his disciple and close friend who produced 12 books describing the World Trade Center attack as “an inside job.”
Not only did Falk contribute the Foreword to Griffin’s 2004 “The New Pearl Harbor”—praising the author’s “fortitude,” “courage,” and “intelligence”—but Griffin credits Falk for getting the book published.
Falk has repeatedly appeared on the “TruthJihad.com” show of Kevin Barrett, a 9/11 conspiracy theorist and Holocaust skeptic, endorsing Barrett’s “good work,” and praising Iranian tyrant Mahmoud Ahmadinejad.
In an unprecedented reprimand, UN Secretary-General Ban Ki-moon took the floor of the Human Rights Council to decry Falk’s 9/11 theories as “preposterous” and “an affront to the memory of the more than 3,000 people who died in that tragic terrorist attack.” Likewise, U.S. Ambassador Susan Rice called Falk’s 9/11 remarks “despicable.” His “distasteful sideshow,” she said, harms the cause of human rights. Falk’s sideshow also harms the cause of the U.N.