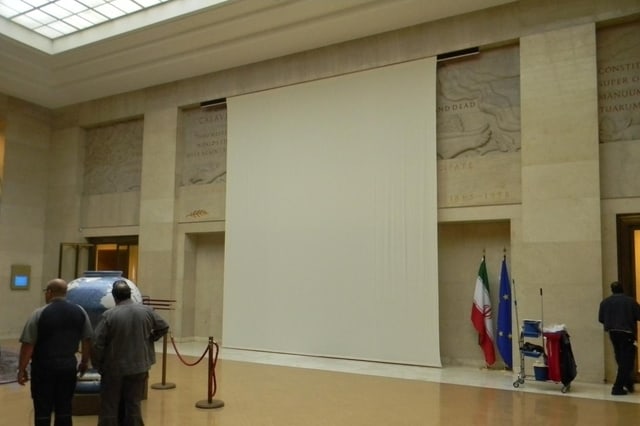 GENEVA, October 14 – The independent non-governmental monitoring group UN Watch today called on UN Secretary-General Ban Ki-moon to order the removal of a curtain recently placed over an historic marble carving at the UN’s European headquarters in Geneva, and to “stop this dangerous kowtowing to Iran’s fundamentalist regime.” (See AFP story below.)

“This is a very dangerous and slippery slope,” said Hillel Neuer, executive director of the Geneva-based watchdog group. Today the UN is covering up the artistic heritage of its most famous building, Geneva’s historic Palais des Nations, to appease the intolerance of a fundamentalist regime that subjugates women, executes gays, and persecutes Bahais; what will the UN hide tomorrow?”,

“Will the UN, in deference to Iran’s nuclear negotiators, cover up the Universal Declaration of Human Rights, whose principles of religious freedom, political liberty, and equality also offend the Iranian regime?”

“Will the UN, in deference to Iran’s sensibilities, cover up the name of the adjacent Rene Cassin Square, dedicated to the architect of the Universal Declaration who also championed Israel’s right to defend itself during the Six Day War of 1967?” 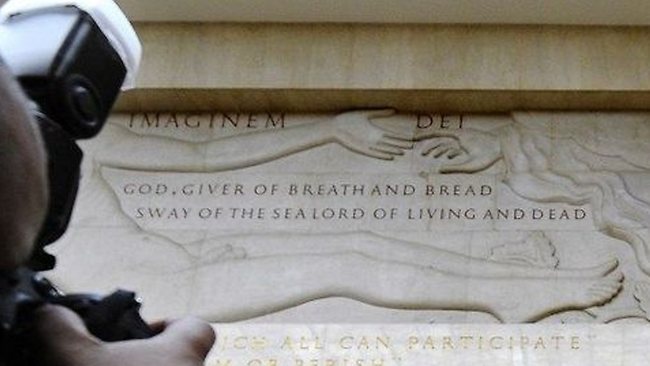 The marble relief, called “The Creation of Man”, was donated by Britain to the UN’s forerunner the League of Nations in 1938. (AFP)

GENEVA, October 14, 2013, — A RELIEF carving of a naked man at the UN’s Geneva headquarters has been covered up, apparently to spare the blushes of Iranian diplomats ahead of fresh talks on the country’s nuclear drive.

UN officials would not comment on why the wall relief, inspired by Michelangelo’s “Creation of Adam”, had been masked by a large white screen, referring questions to the Swiss authorities.

But Swiss newspaper Tribune de Geneve claimed that the aim was to avoid offending the Islamic republic’s delegation for the talks taking place on Tuesday and Wednesday.

Iranian men are expected to cover their arms and legs in public, with women further obliged to cover their hair and wear loose clothing in line with the hardline interpretation of Islam endorsed by powerful clerics in the country.

Donated by Britain to the UN’s forerunner the League of Nations in 1938, the larger-than-life reclining figure was sculpted by Eric Gill, and tops the entrance to the building’s Council Chamber where the talks are due to take place.

Swiss officials declined to address the newspaper’s claim, telling AFP that the aim was to provide a neutral backdrop at the entrance to the meeting hall.

Although the talks are to take place in the UN’s 1930s-era Palace of Nations, the world body is not their official host.

Instead, Switzerland was asked to organise the meeting by the so-called P5+1 group made up of the five permanent UN Security Council members Britain, China, France, Russia and the United States, plus Germany.