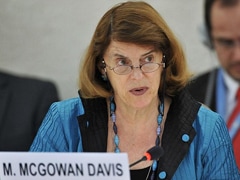 Geneva, 25 August 2014 — The President of the United Nations Human Rights Council, Ambassador Baudelaire Ndong Ella (Gabon), today announced the appointment of Mary McGowan Davis as an additional member of the Commission of Inquiry charged with investigating human rights violations in the Occupied Palestinian Territory, in particular the occupied Gaza Strip, in the context of the military operations conducted since 13 June 2014.  Justice McGowan Davis will join William Schabas and Doudou Diène whose appointments were announced by the Council President on 11 August.

The Independent International Commission of Inquiry was established by the Council through resolution S-21/1 adopted at its special session on the human rights situation in the Occupied Palestinian Territory on 23 July 2014.  As mandated by the Human Rights Council, the Commission of Inquiry will investigate all violations of international human rights and humanitarian law since the current military operations began in mid-June.

The President of the Human Rights Council is continuing to hold consultations in order to find ways to further strengthen the Commission of Inquiry in its work.

Biographies of the members of the Commission of Inquiry

Mary McGowan Davis (United States of America) served as a Justice of the Supreme Court of the State of New York and as a federal prosecutor during the course of a 24-year career in the criminal justice sector in New York City. She also has extensive experience in the fields of international human rights law and transitional justice. She is a member of the Board of Directors of the American Association for the International Commission of Jurists and the International Judicial Academy, and serves on the Managerial Board of the International Association of Women Judges. Justice McGowan Davis also served as a member and then Chair of the UN Committee of Independent Experts tasked with following up on the findings of the UN Fact-Finding Mission on the Gaza conflict occurring between December 2008 and January 2009.

Doudou Diène (Senegal) was the United Nations Special Rapporteur on contemporary forms of racism, racial discrimination, xenophobia and related intolerance from 2002 to 2008 and the Independent Expert on the situation of human rights in Côte d’Ivoire from 2011 to 2014. Mr. Diène holds a doctorate in public law from the University of Paris law degree from the University of Caen (France).

William Schabas (Canada) is professor of international law at Middlesex University in London. He is also professor of international criminal law and human rights at Leiden University as well as emeritus professor human rights law at the Irish Centre for Human Rights of the National University of Ireland Galway. From 2002 to 2004, he served as one of three international members of the Sierra Leone Truth and Reconciliation Commission. Mr. Schabas was also a member and Chair of the Board of Trustees of the United Nations Voluntary Fund for Technical Cooperation in Human Rights and has drafted the 2010 report of the Secretary-General on the status of the death penalty.