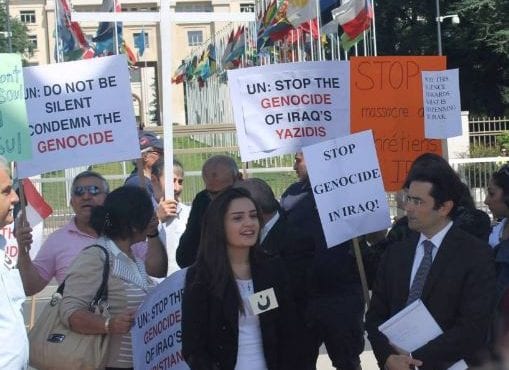 GENEVA, August 25, 2014 –  The Geneva-based human rights group UN Watch, which spearheaded this month’s campaign by rights activists, MPs and Iraqi minority leaders for an emergency UN Human Rights Council session on Iraq, welcomed the news that a meeting will likely be held next Monday, but demanded an outcome with “concrete actions to help the desperate people on the ground.”

The announcement came today at a meeting of the 47-nation body in Geneva, one week after UN Watch launched its global appeal with a rally, press conference and diplomatic marathon featuring Iraqi Christian and Yazidi leaders.

“Our international coalition wants to see three concrete outcomes from the UN meeting: a resolution that strongly condemns the atrocities committed by ISIS; the establishment of a commission of inquiry to document those atrocities; and a revival of the UNHRC’s mandate of a Special Rapporteur on human rights in Iraq, which was wrongly canceled 10 years ago, to ensure that we have an early warning system in place over both the near and long term,” said Neuer.

“With so many lives at stake — men being slaughtered like animals, and women being terribly abused — the UN human rights council must act immediately. We must have deeds, not only words,” said Neuer.

“To date, the silence has been deafening. How can it be that for an entire summer Islamic State terrorists have been beheading children, crucifying Christians, raping and enslaving women and girls, and forcing tens of thousands to flee their homes, only to face starvation and dehydration on remote mountain-tops, and yet the world’s top human rights body is out on vacation?”

During the emergency session next week, UN Watch plans to bring a young Iraqi Christian to testify before the council of the horrors suffered by her community.