UN spokesman: Incitement by UNRWA teachers "remains to be seen" 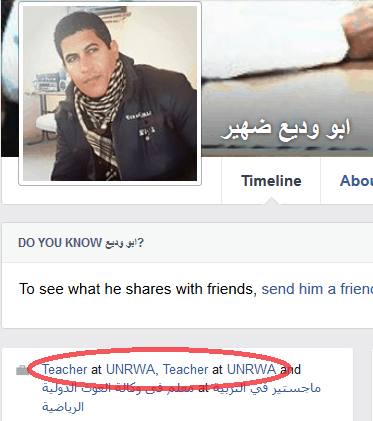 Abu Wadih Duheir, identifying himself on his Facebook page as a teacher at UNRWA,
where he posts photos of him teaching students in UNRWA schools (see below),
shared a video on October 15th that celebrates acts of terror.

GENEVA, October 18, 2015 – UN Secretary-General Ban Ki-moon’s spokesman said at a press briefing on Friday that “it remains to be seen” whether individuals shown in a UN Watch report to be inciting the murder of Jews “were in fact personnel of the UN Relief and Works Agency,” known as UNRWA.

“This is absurd — the UN is trying to stick its head in the sand,” said Hillel Neuer, executive director of UN Watch, a Geneva-based non-governmental organization that monitors the world body.
“We have presented Secretary-General Ban Ki-moon with new and unequivocal evidence of at least ten different self-described UNRWA officials engaged in racist incitement, so it’s simply outrageous for the world body — which, by contrast, famously makes snap condemnations in other situations when it has seen no evidence — to ignore what everyone can see with their own eyes,” said Neuer.
“UN Watch’s report includes archived screenshots as well as live links to antisemitic incitement by UNRWA officials, many of whom post pictures of themselves teaching in UNRWA classrooms,” added Neuer. 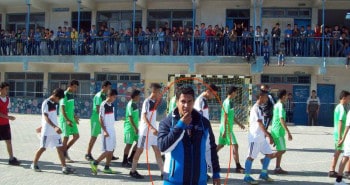 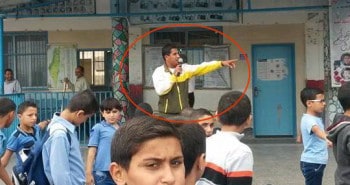 “Regrettably we seem to be witnessing the same UN strategy of delay and denial that characterized their response last month when we reported 12 other UNRWA officials engaged in antisemitic incitement,” said Neuer.

“No Palestinian child should have a UN teacher who incites to terrorism and antisemitism. The UN and top funders of UNRWA such as the United States government must act immediately to terminate employees who are inciting murderous anti-Semitism and fueling the deadly pandemic of Palestinian attacks against Israeli Jews that have claimed innocent men, women and children, aged 13 to 78,” said Hillel Neuer, executive director of UN Watch.

“Despite UNRWA’s promise, in the wake of our previous report, to take action and dismiss UNRWA perpetrators of incitement, there has been no accountability whatsoever,” said Neuer. “On the contrary, UNRWA’s main response has been to try and intimidate UN Watch.”
“We call once again on Ban Ki-moon and UNRWA to immediately terminate their employees who incite to murder. Moreover, we call for the establishment of an independent commission of inquiry, to include representatives of the U.S., the EU (gave $139 million), the UK ($95 million), and other top UNRWA funders, to investigate the culture of impunity for perpetrators of racism and incitement that pervades UNRWA.”

Transcript (see video above)
Daily Press Briefing by the Office of the Spokesperson for the Secretary-General
Faran Haq, Deputy Spokesman for the Secretary-General.
Oct. 16, 2015
Correspondent: You mentioned, and I heard it myself, that Mr. Zerihoun had talked about lowering the irresponsible rhetoric on both sides. UN Watch has just submitted a report to the Secretary-General, specifically calling out some social media postings by self-described employees of UNRWA (United Nations Relief and Works Agency for Palestine Refugees), one of which talks about… has a cartoon with the caption “stab the Zionist dogs”; another posting a video of a sermon exhorting Palestinians to go out and stab Jews in the name of Islam, and there are others in this report. First of all, I’d like to know whether that report has been received. And secondly, will there be an investigation of such claims that UNRWA personnel, UN personnel are themselves contributing to the very incendiary rhetoric that other UN officials condemn.
Deputy Spokesman: Well, it remains to be seen whether these were, in fact, personnel of the UN Relief and Works Agency. The UN Relief and Works Agency takes these claims very seriously whenever they resurface and any time there is any complaint about activities, including Twitter posts or retweets by its staff, it does look into that and it will look into any allegations to see whether they are accurate and to take the appropriate follow-up. Regarding the use of social media, yes, you’re right. Mr. Zerihoun had talked about the impact of social media and irresponsible rhetoric, and in his remarks just now he did call on community, religious and political leaders on all sides to calm the language that they use in this regard, to work together and to de-escalate this situation. Of course, we take it very seriously that all UN employees must be equally responsible in the things we say and do. Yes?