NEW YORK, December 2, 2021 — Yesterday the UN General Assembly adopted three one-sided resolutions targeting Israel, as part of a total of 14 resolutions being adopted over the next month that target the Jewish state, with only five on the rest of the world combined. (Click here for texts and voting sheets.)

“It’s absurd that in the year 2021, out of some 20 UN General Assembly resolutions that criticize countries, 70 percent are focused on one single country— Israel. What drives these lopsided condemnations is a powerful political agenda to demonize the Jewish state,” said Neuer.

Yesterday’s resolution on Jerusalem refers to the Temple Mount, the holiest site in Judaism, solely by its Muslim name, “Haram al-Sharif.”

Neuer said that “the UN shows contempt for both Judaism and Christianity by adopting a resolution that makes no mention of the name Temple Mount, which is Judaism’s holiest site, and which is sacred to all who venerate the Bible, in which the ancient Temple was of central importance.”

Another resolution blames Israel only for the lack of peace, giving a free pass to the Palestinian Authority. References to terror fail to name perpetrators such as Hamas and Islamic Jihad, whereas Israel is named and blamed throughout.

“While France, Germany, Sweden and other EU states are expected to support nearly all of the 14 resolutions to be adopted against Israel during this General Assembly, the same European nations have failed to introduce a single UNGA resolution on the human rights situation in China, Venezuela, Saudi Arabia, Cuba, Turkey, Pakistan, Vietnam, Algeria, or on 170 other countries,” said Neuer. “Where’s the supposed EU concern for international law and human rights?”

UN Watch recently launched a comprehensive database that documents the UN’s bias against Israel, featuring individualized petitions for different countries, in multiple languages, urging governments to stop enabling the subversion of UN Charter principles such as the promise of equal treatment for all nations.

As shown in the database, since 2015 until the present day, the General Assembly has passed 115 condemnatory resolutions against Israel and only 45 against the rest of the world combined.

The resolution on Jerusalem was adopted by a vote of 129 to 11, with 31 abstentions, marking an increase in the 14 countries that abstained when it was last voted on in 2018. This time, a number of European states changed their votes. UN Watch commends the Czech Republic and Hungary, which moved from previous support to voting against the resolution, joining Israel, the U.S., Canada and Australia.

While major European states including France, Italy, Switzerland, Spain and Sweden voted for the resolution, the UK, Germany, Netherlands, Denmark, Austria, Bulgaria, Croatia, Lithuania, Romania, Slovakia and Slovenia, broke ranks and switched their votes to Abstain, as did other states including, most notably, India, Brazil and Colombia.

The resolution on “Peaceful settlement of the question of Palestine” was overwhelmingly adopted 148 to 9, with 14 abstentions. Despite nearly all European states supporting the resolution, Hungary, to its credit, changed its vote from Yes last year, joining Israel, the U.S., Canada and Australia among the nine states that voted Against. The Czech Republic, Slovenia and Uruguay switched their votes from Yes to Abstain.

Following are the three resolutions adopted yesterday that target Israel:

Excerpt: “Expressing grave concern over the continued closure of Palestinian institutions in the City as well as acts of provocation and incitement, including by Israeli settlers, including against holy sites.”

Analysis: Implies that Israeli administration of Jerusalem hinders freedom of religion when in fact the opposite is true—before 1967, Jordan destroyed Jewish holy sites and denied access to Jews, while under Israel all faiths have access to the city and enjoy full freedoms. Uses of uniformly harsh language against Israel that is not used even against regimes like Iran. Repeated passage of annual resolution to address acts from 1980, or matters already covered in other similar resolutions, serve no purpose other than demonization. Uses only the Islamic term “Haram al-Sharif” to describe Jerusalem’s Temple Mount, ignoring Jewish and Christian religion and history. 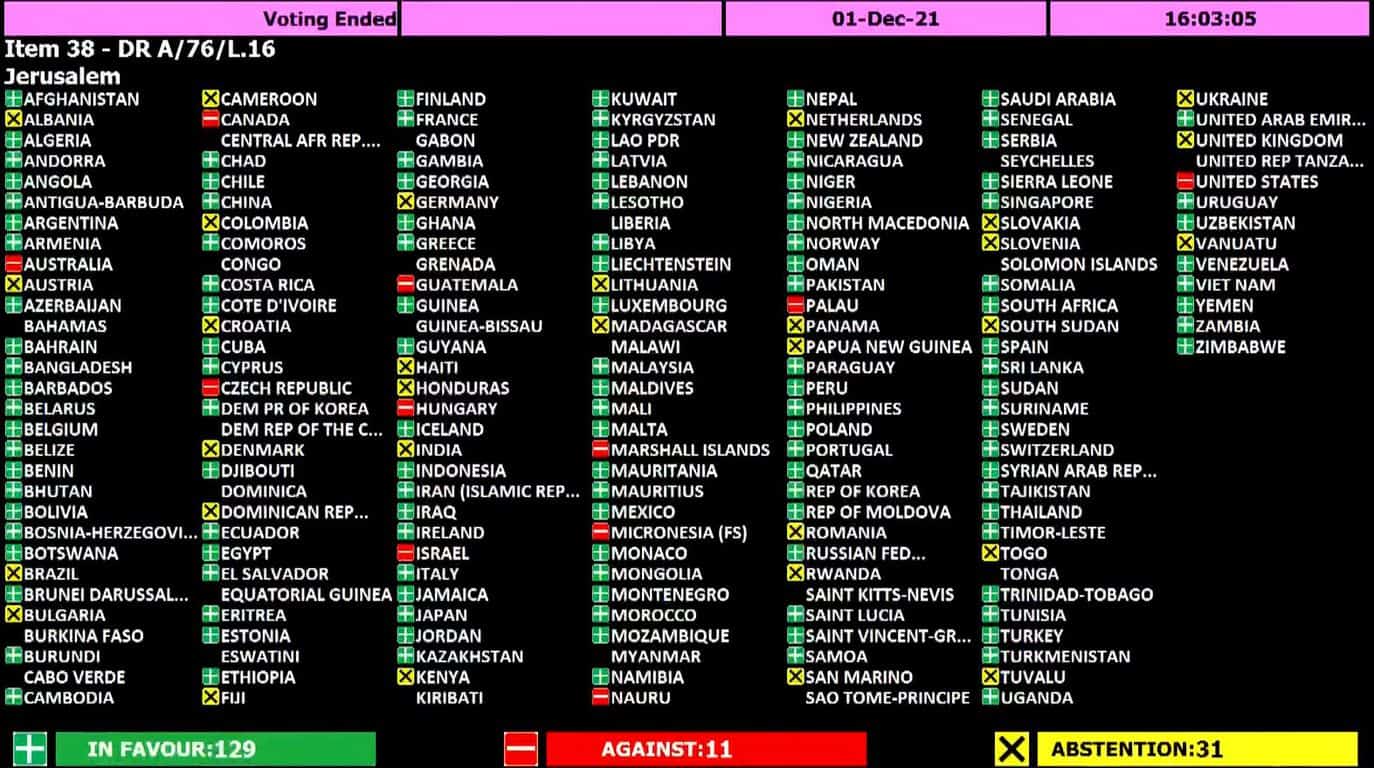 2. “Peaceful settlement of the question of Palestine”

Excerpt: “Reaffirming the illegality of Israeli settlement activities and all other unilateral measures aimed at altering the demographic composition, character and status of the City of Jerusalem and of the Occupied Palestinian Territory as a whole, including the wall and its associated regime, and demanding their immediate cessation, and condemning any use of force against Palestinian civilians in violation of international law, notably children.”

Analysis: Blames Israel only for lack of peace. Text is redundant to several other resolutions and serves no effect other than demonization. References to terror fail to name its perpetrators, whereas Israel is named and blamed throughout. 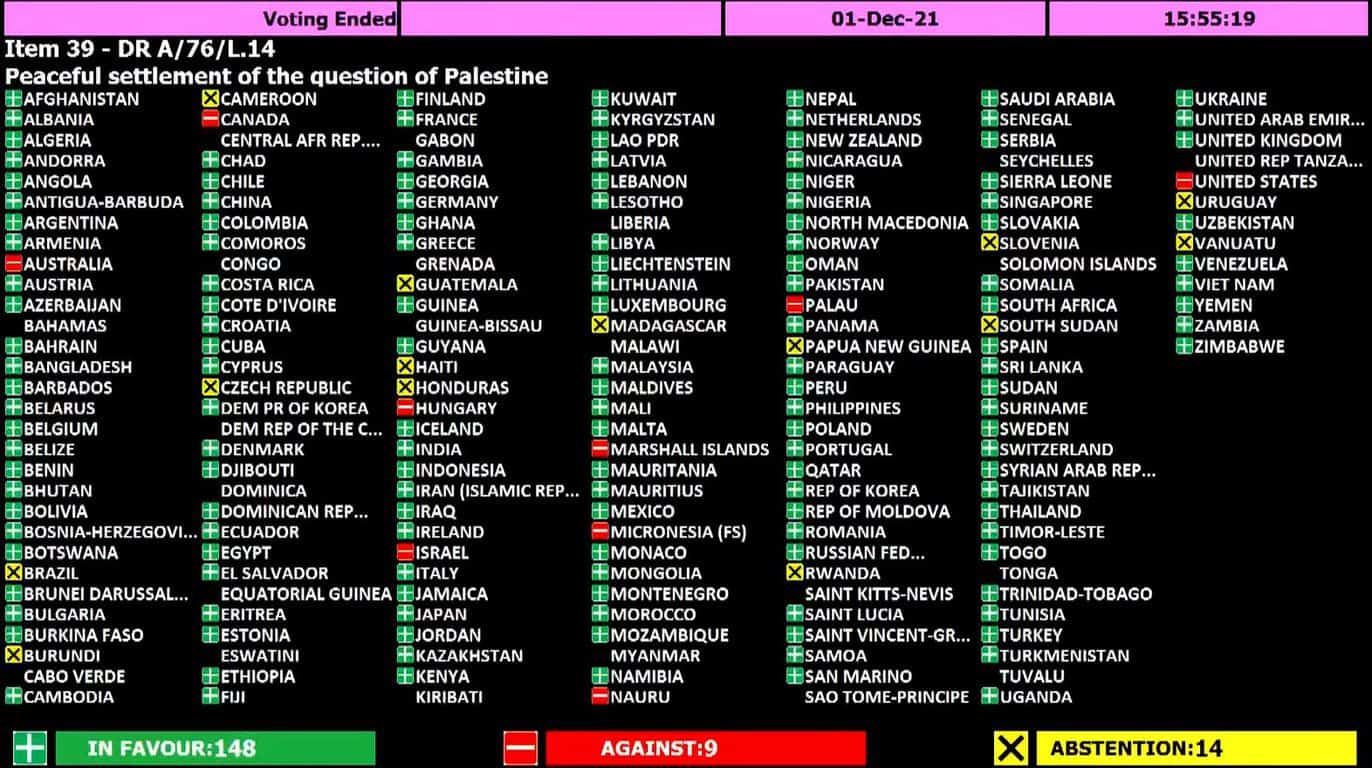 Excerpt: “Deeply concerned that Israel has not withdrawn from the Syrian Golan, which has been under occupation since 1967…”

Analysis: Redundant to an existing resolution on “the Occupied Syrian Golan.” Oblivious to genocidal massacres taking place now in Syria and its security implications for Israel and the civilians of the Golan Heights. Ignores Syria’s history of shelling Israeli communities, its leaders’ prior calls for a “war of annihilation” against Israel, and Syria’s 1967 aggression that led to its loss of the territory. Calls on Israel to negotiate with Syria and Lebanon while not making the same demand of those countries. 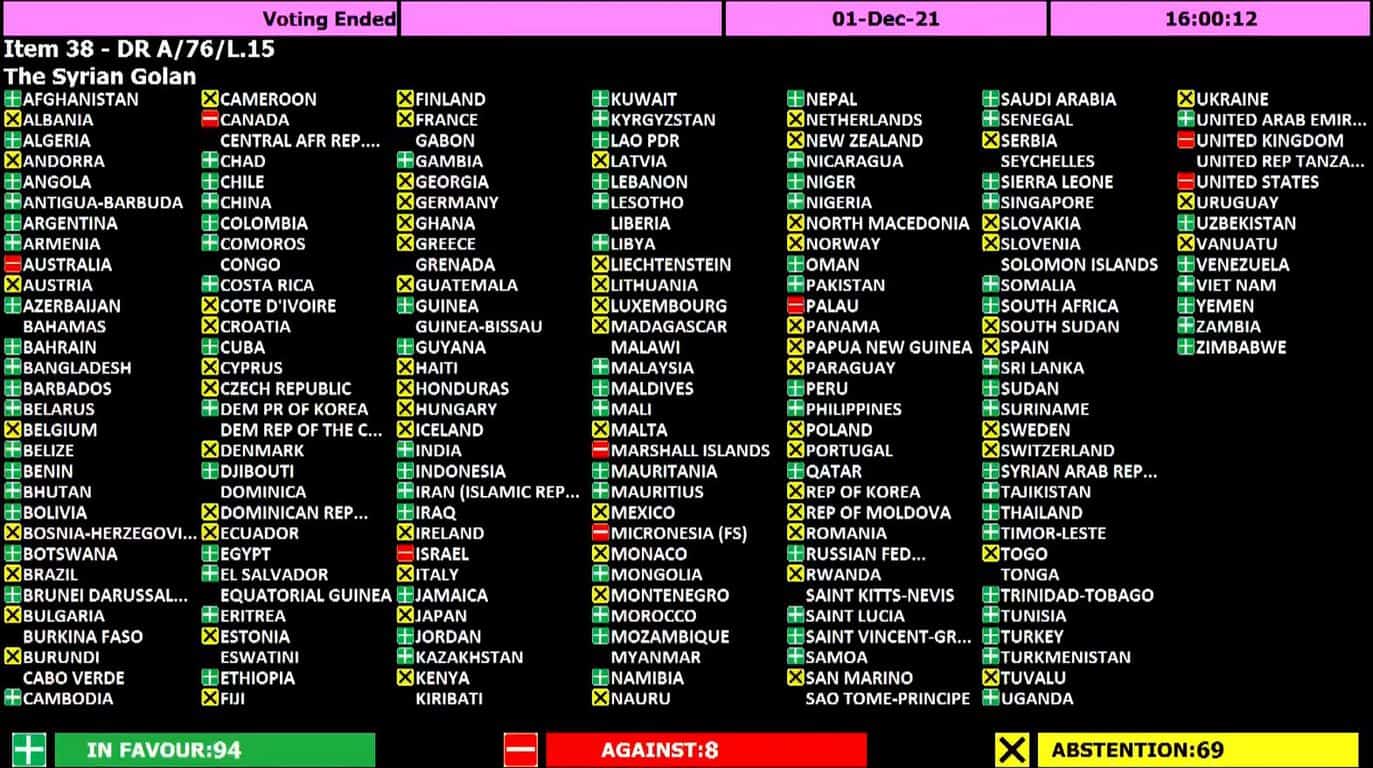