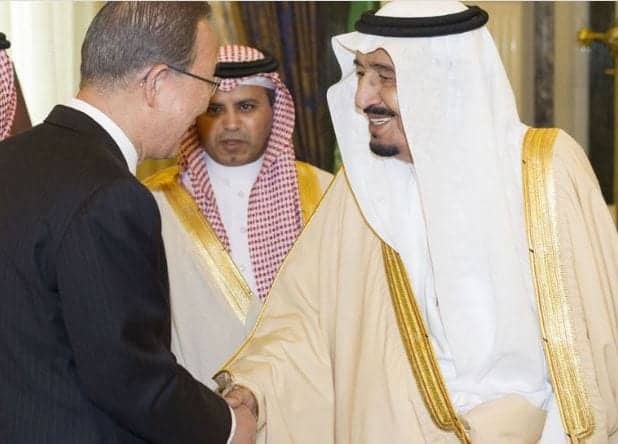 GENEVA, May 13, 2015 – The fundamentalist Saudi monarchy is seeking to head the world’s top human rights body, a move liable to be “the final nail in the coffin for the credibility of a body that already counts dictatorships like China, Cuba, and Russia as members, and whose top advisor is co-founder of the Muammar Qaddafi Human Rights Prize,” said Hillel Neuer, executive director of the Geneva-based UN Watch, a non-governmental human rights group.

“We urge U.S. Ambassador Samantha Power and EU foreign minister Federica Mogherini to denounce this despicable act of cynicism by a regime that beheads people in the town square, systematically oppresses women, Christians, and gays, and jails innocent bloggers like Raif Badawi for the crime of challenging the rulers’ radical brand of Wahabbist Islam.”

UN Watch has learned from diplomatic sources that Saudi Arabia, an elected member of the 47-nation Human Rights Council, is actively lobbying the Asian group to be elected as president for 2016. The story was recently confirmed by the Tribune de Genève. Germany currently holds the presidency, a one-year term that rotates among the five regional groups.

“Electing Saudi Arabia as the world’s judge on human rights would be like making a pyromaniac as the town fire chief,” said Neuer.

The council has already been heavily criticized by rights activists for turning a blind eye toward the world’s worst abusers. In its 9-year history, for example, there has not been a single resolution, urgent session or investigation of gross abuses by China, Russia, Cuba, Pakistan, or Venezuela.

The U.S. and the European Union failed to oppose Saudi Arabia’s election to the council in 2013, said Neuer. “We urged them to oppose the election of Saudi Arabia, yet Washington and Brussels did nothing; now they must take responsibility and at least stop the Saudi from seizing the presidency,” he added.

“It’s time for the politics of oil to stop trumping the basic principles of human rights.”