The Special Committee is composed of more than 50 NGOs with UN consultative status that are active on a range of human rights issues. It works to bring together international NGOs, improve their cooperation, disseminate information, and increase their exchanges with the United Nations and its agencies. 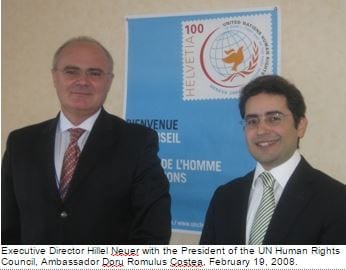 “UN Watch is both immensely proud and gratified that Hillel Neuer has been elected a vice-president of the Special Committee of NGOs on Human Rights,” said Alfred H. Moses, chair of UN Watch. “Hillel’s election by acclamation is testimony to his leadership role on behalf of UN Watch in championing human rights worldwide,” said Moses.

“I am grateful to the special committee for this opportunity to promote the vital role of non-governmental organizations in the protection of human rights,” said Neuer.

“I extend my congratulations to Budi Tjahjono, the new president, and to the other members of the bureau. I look forward to fruitful cooperation with them and all of the committee’s constituent NGOs as we continue our critical work to enable NGOs to further the cause human rights.”