Neuer: “Foxes are guarding the chickens”

Geneva, May 21, 2008 — UN Watch expressed concern today after 114 UN General Assembly members failed to respect human rights standards by electing Pakistan to the Human Rights Council, with an even larger 142 supporting Bahrain. “We were delighted, however, that our intense efforts to defeat Sri Lanka bore fruit, though appalled that it still managed to win 101 votes,” said Hillel Neuer, executive director of UN Watch, which is headquartered in Geneva together with the 47-nation council

According to our a detailed report by UN Watch and Freedom House, “Pakistan, Sri Lanka, Bahrain, Gabon and Zambia all failed to show the minimum standards required for election to the council — yet now all but one was elected,” said Neuer.  Click here for report.

“Unless the UN stops electing the worst violators to the Human Rights Council,” said Neuer, “we will continue to have the foxes guarding the chickens — with the likes of China, Saudi Arabia and Cuba blocking action for Tibet, women’s rights or jailed journalists.”

“The reelection of Pakistan sends the wrong signal, and hurts victims worldwide. This is a country with a record of systematic violations of basic human rights, including arbitrary detention, enforced disappearances, persecution of religious minorities and a judicial system that fosters violence against of women as a form of punishment,” said Neuer.

“As head of its Islamic bloc for the past two years, Pakistan has helped the council adopt a series of Orwellian resolutions that shield abusers like Sudan from scrutiny, undermine the role of independent experts, and eviscerate the international protection of freedom of speech in order to legitimize Islamic blasphemy restrictions,” Neuer added. 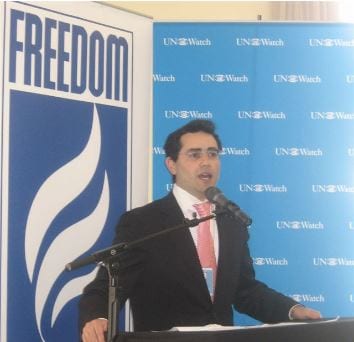 According to the 2006 General Assembly resolution that established the council, members are to be elected based on their ability to “uphold the highest standards in the promotion and protection of human rights.”

The report by UN Watch and Freedom House examined 20 candidate countries according to their record of human rights protection at home, and their support for human rights resolutions at the UN. The report cites data from their own 2008 studies as well as assessments published by Reporters Without Borders, The Economist’s Democracy Index, and the Democracy Coalition Project.

The joint report sparked a heated debate this month in the countries that were found to be “Not Qualified,” with a front-page story in Bahrain’s Gulf Daily News, editorials in Pakistani newspapers like The Post, and articles in Sri Lanka’s The Mirror, and GabonEco.
Bahrain’s ambassador in Geneva, Abdulla Abdullatif Abdulla, described the report by Freedom House and UN Watch as “unwarranted and unfounded.”

However, the UN Watch and Freedom House findings were echoed by 11 Bahraini human rights organizations—including the recently-dissolved Bahrain Centre for Human Rights—who pledged not to support Bahrain’s candidacy for a seat on the council unless the government improved civil liberties.
They demanded legislation to improve the rights of migrant workers such as housemaids, prevent racial discrimination, give redress to victims of torture, introduce citizenship equality and protect the role of human rights defenders. The demands were presented in a meeting with Minister of State for Foreign Affairs Nazar Al Baharna.
The joint report also rated the qualifications of Brazil, Burkina Faso, and East Timor as “questionable.”  Of those, only East Timor failed in today’s vote.
In a separate study, UN Watch found that the council failed to speak out for victims of the world’s most severe human rights violations.

The former Commission on Human Rights became discredited for ignoring most of the world’s violators and focusing instead on Arab-sponsored condemnations of Israel.

However, despite the attempts at reform, the new council has only aggravated that trend.

Since being created in 2006, the council adopted 19 Islamic-sponsored resolutions against Israel, including in four emergency sessions, several of which were opposed by Western states for omitting mention of attacks by Hamas and Hezbollah. Otherwise, it adopted four censures of Burma and one of North Korea.

“Although Sudan was debated several times, it has consistently escaped censure, with the help of allies in the Islamic, Arab and African groups that control the council’s majority. Several council resolutions praised the Khartoum regime for its ‘cooperation,'” said Neuer.

A recent resolution on the Democratic Republic of Congo, where 4 million have been killed, eliminated the Council’s investigation of abuses there, one of several recent moves drawing sharp critcism from human rights activists.