Geneva, June 20, 2008 —   A “non-paper” by the planners of next year’s UN conference  on racism singles out Israel for opprobrium and breaches Europe’s red lines, UN Watch told the UN Human Rights Council this week.

The Council debate on Tuesday featured Islamic states and their allies clamoring for a Durban Review Conference, set for next April in Geneva, that will be a highly visible, amply funded, well-advertised and well-attended gathering that will focus the world’s attention on accusations against the West for “defamation of Islam” and “racial discrimination” against its adherents, as well as against Israel for the
“racist occupation” of Palestinians.

Pakistan for the Islamic group and Egypt for the African group called for addressing “new and emerging manifestations of racism” — i.e., the so-called “defamation of Islam” — in what would amount to reopening, instead of reviewing, the 2001 Durban Declaration. They demanded the UN give the conference more funding, more media exposure, more staff, and more NGO delegates. More Durban.

Pakistan further called for alterations in international human rights law to curb freedom of speech deemed offensive to Islamic sensitivities. It complained of “boycotts and the threat of disengagement” from the conference. Egypt, meanwhile, slammed the “glaring institutional weakness” of the UN bureaucrats charged with servicing the conference.

Algeria and Azerbaijan urged the conference to address the victims of “foreign occupation” — i.e., the alleged victims of Israeli racism.

The next regional meeting has been announced for Nigeria on August 27-29. For full UN summary, click here.

of the Durban Declaration and Programme of Action

Our debate today on racism and the Durban Declaration follows the commemoration of forty years since the assassination of the Reverend Martin Luther King.

It is a time to reflect upon historic principles — principles like “One person, one vote.”
In democracies today, that sounds obvious. But five decades ago, in parts of the United States, this basic principle of democracy, equality and human dignity was not obvious at all.

For no reason other than the colour of their skin, many African-Americans were denied the right to have their votes count equally.

During that difficult time, there was a young attorney in the State of Georgia who saw the mistreatment of his fellow citizens. Marching arm in arm with Dr. King, he decided to challenge racial injustice, all the way to the Supreme Court. Thanks to his arguments, in the 1963 landmark case of Grey v. Saunders, the Court declared: “One person, one vote.”

The young activist’s name was Morris B. Abram. He went on to head the United Negro College Fund, and to serve as U.S. Permanent Representative to the predecessor body of this Council.

Fifteen years ago, guided by the same vision of human rights and equality, he founded United Nations Watch, which remains outspoken in protecting victims of racism and intolerance around the world.

Mr. President, it is with this legacy and with these principles that we approach the Durban Review Conference, now set for next April in Geneva.

UN Watch recently hosted an international symposium to assess this process. We are grateful to the many high United Nations officials and diplomats who met with our delegates from around the world.

We resolved that Durban Review must reject the unacceptable elements that marred the 2001 conference. It cannot once again be turned into a paradox — into a platform for racist hatred and anti-Semitism — nor misuse human rights terminology in regard to the Arab-Israeli conflict.

We are encouraged to see many strong commitments in this regard, including from France, the U.K. and the Netherlands.

At the same time, there are worrying signs.

Despite objective approval by the UN Secretariat, the Preparatory Committee of the Durban Review Conference refused to accredit a respected Canadian Jewish NGO.

This resulted from frivolous objections by Iran, which sought to deflect attention from its mistreatment of minorities, as condemned by the General Assembly — and from the racist policy of its leaders, condemned by this Council’s expert on racism and the international community.

Yet the Committee readily welcomed another group, whose very name — “Palestinian Grassroots Anti-Apartheid Wall Campaign” — brings back the hateful and divisive rhetoric of 2001.

Most worrying of all, however, is the recent “non-paper,” an early blueprint for the April 2009 declaration. In two separate provisions, this document already singles out Israel, falsely implying that the Arab-Israeli conflict is one of race. It is not.

Unless we see urgent remedial action, Durban Review is in danger of becoming little more than Durban II. 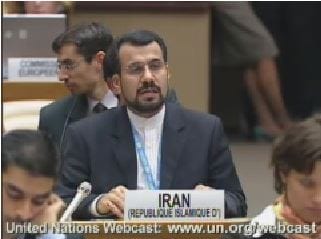 In exercising Right of Reply with regard to the references and allegations made by the UN Watch this morning under Agenda Item 9 concerning the accreditation of the one NGO to the Durban Review process.

My delegation would like for the sake of clarity to state the following: First of all, I should reiterate that we fully support active participation of civil society, in particular non-governmental organizations, in the Durban Review Process.

Secondly, as the distinguished members of the council are well aware, we have already established within the framework of the PrepCom for the Durban Review Conference certain rules and procedures to regulate the accreditation and participation of NGOs in the process.

The said NGO which was mentioned in the statement by UN Watch this morning was, as a matter of fact, a corporation without consultative status with ECOSOC. We acted in full compliance with established rules of procedure, particularly the content of the decision 1/1 of the PrepCom which provides the member states with the legitimate right to submit comments and questions on any of the applications for accreditations by NGO as well as the provisions of the paragraph 44B of the ECOSOCH resolution 1996/31.

Accordingly, and as a matter of procedure, we raised some specific and clear questions and issues to be answered by the said NGO. Unfortunately the said NGO failed to answer to those questions and finally decided to withdraw its application for accreditation.

I should also reiterate that we showed our utmost flexibility during the course of consideration of the said NGO accreditation. It is regrettable that the UN Watch while misinforming the council tries to resort to blame-game and distortion of realities on the ground.