The question facing the Commission of Inquiry into Israel’s “assault” on Gaza “civilian protests” is whether they will exercise independence of scope, thought and action, or whether they will be constrained by the imbalances of fact and law enshrined in their founding document, Resolution S-28/1, as adopted on May 18, 2018.
The resolution condemns only Israel, ignores Israel’s right to self-defense, and completely omits mention of Hamas. Furthermore, in its condemnation of Israel, for example in OP1, the resolution prejudges the result of any COI investigation by determining in advance that Israel is “in violation of international humanitarian law, international human rights law and relevant United Nations resolutions.”
Moreover, Resolution S-28/1 is replete with conclusory language—referring repeatedly to “civilians” engaged in “peaceful protests”—that purports to dispose of the fundamental questions facing the COI.
As a preliminary matter, it is imperative that the COI determine the correct legal framework under which to evaluate the facts. While some UN officials, and resolution S-28/1 itself, suggest that the applicable body of law is the law enforcement paradigm under international human rights law, this is based on the erroneous characterization of the events as: (a) “protests”; (b) “peaceful”; and (c) “civilian.”
In fact, as the UN’s Palmer Commission concluded in 2011, Israel and Hamas have been engaged in an international armed conflict for many years.[1] The current round of violence is part of that armed conflict. As documented below, many of the so-called protesters were actually Hamas operatives—not “civilians”—acting on orders to breach Israel’s Gaza border fence, invade Israel’s border communities and commit terrorist attacks against Israelis.
They fomented violent riots, used weapons to attack Israel’s border security officers, and perpetrated terrorism to achieve these goals. Accordingly, Israel’s use of force against protesters must be evaluated under the framework of International Humanitarian Law (IHL), also known as the law of armed conflict. This is consistent with the judicial conclusion of the Supreme Court of Israel in its May 24, 2018 decision about the IDF’s rules of engagement, that protesters taking an active part in hostilities are subject to the law of armed conflict.[2]
Regrettably, Resolution S-28/1 contains significant omissions or misstatements which affect the legal analysis. Among other things:
• Resolution S-28/1 omits any mention of Israel’s right to self-defense, which is enshrined in Article 51 of the UN Charter. This right to self-defense does not demand that Israel sit back and wait to suffer casualties before it fights back, but is triggered by imminent threats. As a High-Level Panel of experts appointed by former Secretary-General Kofi Anan explained in 2004, “long established international law” permits a threatened state to “take military action as long as the threatened attack is imminent, no other means would deflect it and the action is proportionate.”[3]
• Resolution S-28/1 falsely characterizes all of the Palestinians at the border fence as  “civilians” and their activities as ”peaceful protests.” The resolution title itself presumptively refers to “civilian protests;” PP8 refers to Israel’s “intentional targeting” of Palestinian “civilians”; OP1 refers to “peaceful protests”; OP3 refers to “demonstrations” of “civilians” that are “peaceful”; OP5 refers to Israel’s “assaults” on the large-scale “civilian protest.” These blanket characterizations of the individuals on the Gaza side and of their intentions and actions are false, incomplete and/or misleading. Hamas rules Gaza and played an essential role in overseeing or encouraging the events at the border, dispatching Hamas operatives under the guise of protests to engage in hostilities. Palestinian rioters directly participating in hostilities are not entitled to the protection afforded to civilians. Article 51(3) of the First Additional Protocol to the Geneva Conventions (1949) permits attacks on civilians “for such time as they take direct part in hostilities.”[4] According to the ICRC commentary, this means “acts of war which by their nature or purpose are likely to cause actual harm to the personnel and equipment of the enemy armed forces.”[5] Therefore, engaging in violent acts intended to breach Israel’s border fence with Gaza and/or cause harm on the Israeli side of the fence would cause rioters to lose protected civilian status. Significantly, when the protesters have stayed away from the fence, Israel has responded with less force resulting in much lower casualty rates.[6]
• Resolution S-28/1 refers to Israel’s “disproportionate and indiscriminate use of force,” suggesting that “the extensive loss of life” on the Palestinian side renders the force used by Israel not proportional. However, notwithstanding the common misconception, the concept of proportionality in IHL is not a question of comparing the body count—of tabulating and comparing the number of Israelis killed or injured versus the number of Palestinians killed or injured. Rather, it is a prospective consideration based on the military commander’s assessment of whether the expected civilian casualties will be excessive in relation to the anticipated military gain. In fact, IHL accepts the possibility of civilian casualties.[7] The correct legal analysis would look at whether the Israeli commander who decided to employ live ammunition in a particular scenario determined that the expected civilian casualties would not be excessive in relation the anticipated military gain, presumably preventing the breach of the border fence. It is a case by case analysis that can only be properly undertaken based on facts and data in the control of the Israeli military.
• Resolution S-28/1 omits any reference to Hamas violations of international law, which are widespread and severe. As documented below, these include: targeting Israeli civilians in violation of Article 51(2) of the First Additional Protocol to the Geneva Convention of 1949; using Palestinian civilians, including women and children, as human shields, in violation of Article 51(7) of the First Additional Protocol; and disguising its own fighters as civilians, in violation of Article 37 of the First Additional Protocol — the crime of perfidy. 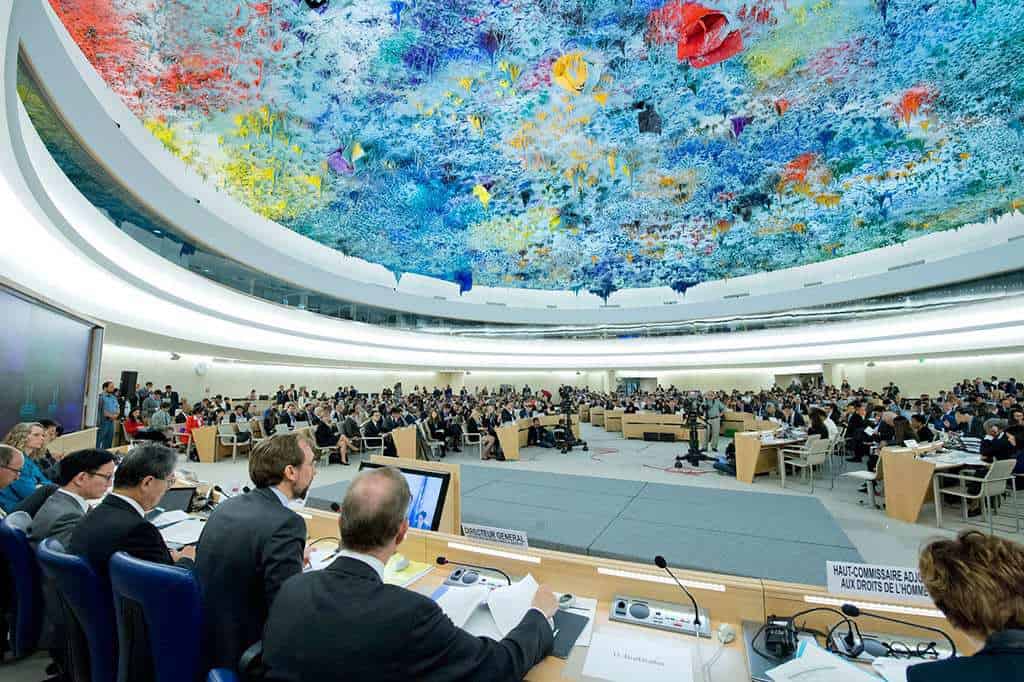