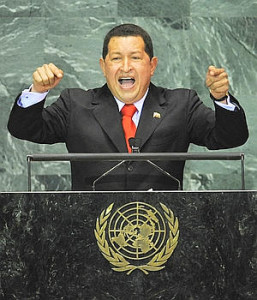 Today Venezuela’s UPR report is scheduled to be adopted by the U.N. Human Rights Council at 3 pm Geneva time. Each review lasts one hour, during which state representatives have 20 minutes to discuss the report, accept or reject its recommendations, and respond to any questions from the floor.

The other 40 minutes are divided equally between states and NGOs, each getting two minutes to speak. That means a maximum of 10 states and 10 NGOs can take the floor.

As reported, the list of speakers is as follows:

What is clear from the above is that the Venezuelan government, aided no doubt by the experienced Cuban diplomats,  rallied their close friends — governments and phony NGOs  (known as “GONGOs”, or Government-operated NGOs) — to monopolize the limited time of the debate.

For example, there are several pro-Castro NGOs on the list as well as the North-South XXI group, which was created by the Qaddafi regime. We shall be lucky to hear even six minutes of genuine scrutiny of the Chavez regime’s violations of human rights.