Video: "Why is the U.N. defining Judaism as a war crime?"

Why is the U.N. defining Judaism as a war crime?

The UN Human Rights Council wrapped up it main session of the year by condemning Israel in five resolutions and seven reports. Click here for more.
Addressing the Council, UN rights chief Zeid Ra’ad al-Hussein announced that his office is moving ahead on producing a blacklist of companies doing business over the Green Line, despite strong opposition by U.S. Ambassador Nikki Haley. For UN Watch’s new ‘Myths and Facts on the UN’s Anti-Israel Blacklist’, click here.
Arab dictatorships and their allies lined up to demand the release of the anti-Israel database, and to excoriate the Jewish state.
Jordan: “The Arab Group urges the High Commissioner to publish the names of these corporations.”
Egypt: “We urge the High Commissioner to publish the list of these enterprises.”
Pakistan: “Publish the names of the 216 companies profiting from the illegal construction and growth of settlements.”
Human Rights Watch: “We encourage the High Commissioner to publish the names of the companies before the end of his tenure, and urge the Council to ensure his Office has the resources. Settlements are unlawful under International Humanitarian Law, and the transfer of the occupying power’s civilian population to the occupied territory is a war crime.”
South Africa: “There is no difference between what’s happening to the people of Palestine and what was done under apartheid in South Africa.”
North Korea: “Israel recently committed the high-handed and brazen act of openly declaring Jerusalem as the capital of Israel without hesitation.”
PLO: “Israel continues to murder, to pursue ethnic cleansing, to grab natural resources and land, to erect barriers and walls. It’s been cutting down trees, demolishing houses, and desecrating religious sites.”
UN Watch Executive Director Hillel Neuer:
“Mr. President, if you add up this session’s country reports and resolutions, there are zero on China, zero on Saudi Arabia, and zero on most other countries; 2 on North Korea; 3 on Iran — and then 12 on Israel.
At a a time when much of the Middle East is sinking from Syrian genocide, ISIS sexual enslavement of Yazidi girls, and deadly civil wars in Iraq, Yemen, Libya, and Sinai, by what logic or morality does this Council devote so much of its time to singling out the region’s only democracy?
Why is the United Nations obsessed with scapegoating the world’s only Jewish state?
Now, many spoke here to endorse one these anti-Israel reports — the one calling for a blacklist of companies doing business with Jews who live east of the 1949 Armistice Line.
Under this report — sponsored by racist dictatorships, egged on by organizations like Amnesty International and Human Rights Watch — the act of a Jew living in the ancient Jewish Quarter of Jerusalem is defined as a war crime.
Mr. President, next week, Jewish families worldwide will gather around a dinner table to recount the Exodus from Egypt to the Promised Land. They will conclude, as they have for millennia, by saying “Next Year in Jerusalem.”
Since ancient times, Jews speak of Jerusalem in their daily prayers, when they say grace after meals, and when they marry.
I ask: ‘Why is the United Nations defining the practice Judaism as a war crime?”

Thread: my speech to @UN_HRC. "Mr. President, if you add up this session’s country reports and resolutions, there are zero on China, Saudi Arabia, and most other countries; 2 on North Korea; 3 on Iran; and then 12 on Israel." https://t.co/GZa07AQM9S

On the night that UN Special Rapporteur on Palestine Michael Lynk delivered his report, delegates received only one other official report: a UN Watch written submission exposing the inherent prejudice of Lynk’s mandate, which judges Israel guilty in advance, and effectively denies that Israelis have any human rights.
Two other UN Watch submissions, published as official documents of the UNHRC’s 37th session, outlined why the new blacklist violates international law, and also made the case for reforming UNRWA, which violates its mandate, spews hatred and exacerbates conflict.
Right before Lynk spoke, UN Watch held a powerful side event inside the Council to support Canada’s call to review Lynk’s appointment. Speakers included UN Watch Legal Advisor Dina Rovner and NGO Monitor Legal Advisor Anne Herzberg. Click for video

Why is the @UN defining the practice of Judaism as a war crime? pic.twitter.com/vJ2XdL7xV8 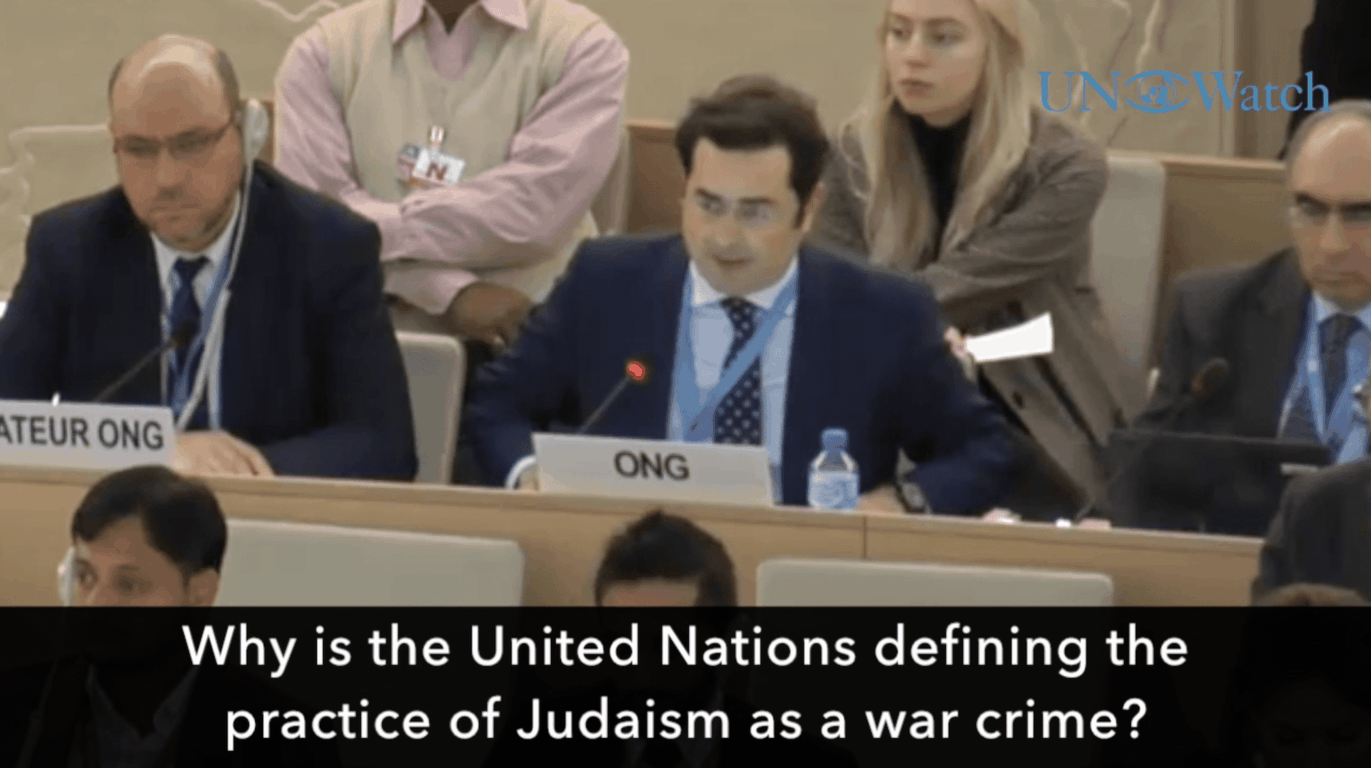