Syria to chair UN disarmament forum on chemical & nuclear weapons; watchdog calls on US & EU to walk out 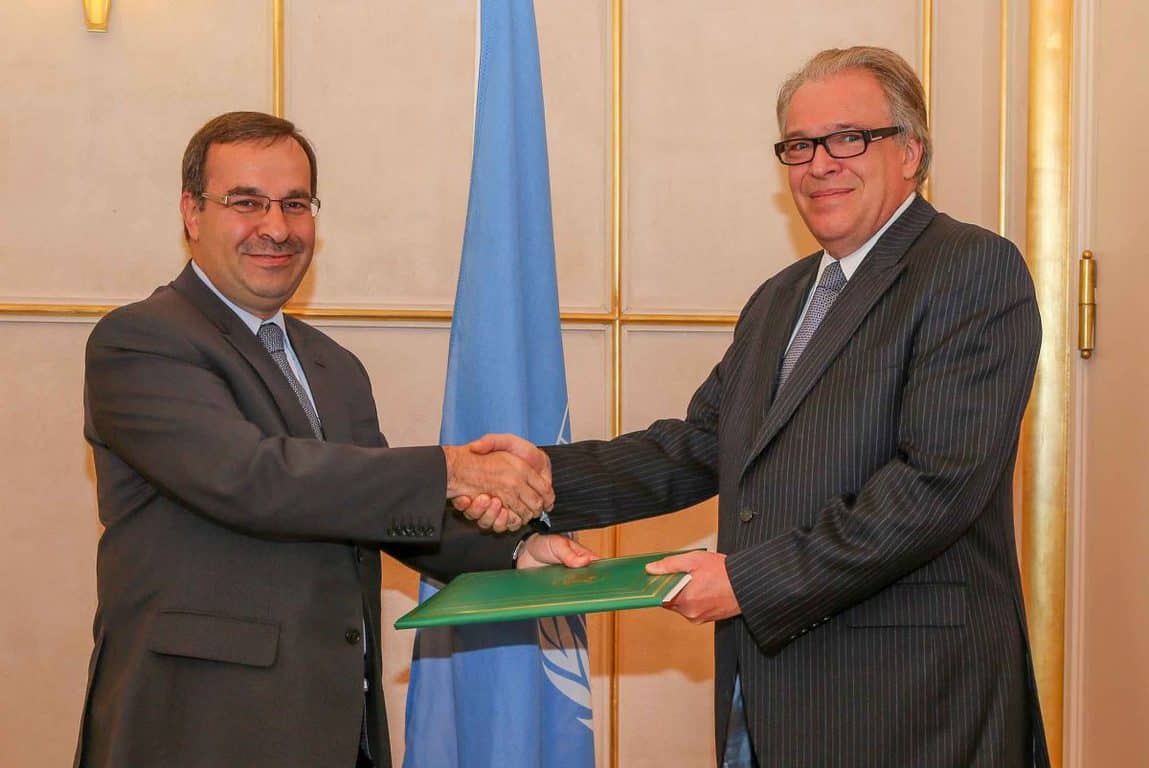 GENEVA, April 9, 2018 – Despite accusations that it perpetrated yet another deadly chemical weapons attack on Saturday, Syria will next month chair the United Nations disarmament forum that produced the treaty banning chemical weapons, sparking calls by an independent monitoring group for the U.S., the EU, and UN chief Antonio Guterres to strongly protest, and for their ambassadors to walk out of the conference during the four weeks of the Syrian presidency.

The 65-nation Conference on Disarmament, based in Geneva, has also negotiated the Nuclear Nonproliferation Treaty, considered the cornerstone of nuclear disarmament efforts, as well as the convention against biological weapons.

“Having the Syrian regime of Bashar al-Assad preside over global chemical and nuclear weapons disarmament will be like putting a serial rapist in charge of a women’s shelter,” said Hillel Neuer, executive director of United Nations Watch, the Geneva based non-governmental organization. The activist group announced that it intends to hold protest events outside the UN hall featuring Syrian victims of their government’s chemical weapons attacks.

“The Assad regime’s documented use of chemical weapons remains the most serious violation of the Chemical Weapons Convention in the treaty’s twenty-year history,” said Neuer. “We urge the UN to understand that at a time when Syria is gassing its own men, women, and children to death, to see Syria heading the world body that is supposed to protect these victims will simply shock the conscience of humanity,” said Neuer.

Under UN rules, the Syrian ambassador to the forum, Hussam Edin Aala, will help organize the work of the conference and assist in setting the agenda. Mr. Aala will exercise all functions of a presiding officer and represent the body in its relations with states, the General Assembly and other organs of the United Nations, and with other international organizations. While the post is largely formal, “Syria holding the president’s gavel is liable to seriously undermine the UN’s credibility, and will send absolutely the worst message,” said Neuer.

“United Nations Watch urges the U.S., Britain, France, Germany, and all other member and observers states to refuse to send ambassadors to any meeting of this UN forum that is being chaired by Syria.” The U.S. and Canada pulled out while Iran was chair in 2013, and should do so again.

What UN Chief Guterres Should Do

The UN secretary-general is likely to say the post is merely the result of an automatic rotation, and that the matter can only be addressed by member states.

Yet actions taken by other high UN officials prove he can speak out. When Syria was elected to a UNESCO human rights committee in 2013, the head of that UN body went on record to say that the election was wrong. “Given the developments in Syria, the director-general does not see how this country can contribute to the work of the committees.”

According to Neuer, “past precedent shows that UN officials can act as the world’s moral voice when a UN committee makes obscene decisions which only cast a shadow on the reputation of the UN as a whole.”

He predicted attempts by UN officials to downplay what he described as “a fundamental conflict of interests” to have Syria as president of a disarmament forum, “an act liable to be exploited by Syrian propaganda, as they have done after other UN elections, to legitimize Assad’s cruel regime.”

“A country that flagrantly violates the chemical weapons convention, and which was reported to the UN Security Council by the International Atomic Energy Agency for its covert construction of a nuclear reactor and found in breach of the Nonproliferation Treaty, should be barred from any formal positions in UN bodies dealing with the such vital matters as biological, chemical and nuclear weapons disarmament,” said Neuer.

“The Assad regime simply cannot be a credible chair of this or any other United Nations body. Syria’s use of deadly chemical weapons and its illegal pursuit of nuclear weapons, in breach of its disarmament obligations, run counter to the objectives and fundamental principles of the Conference on Disarmament itself. Syria’s chairmanship will only undermine the integrity of both the disarmament framework and of the United Nations, and no country should support that.”

Syria will assume the presidency of the Conference on Disarmament on May 28 and hold it over four weeks, until June 24.

About the Conference of Disarmament

The Conference of Disarmament (CD) reports to the UN General Assembly and is billed by the UN as “the single multilateral disarmament negotiating forum of the international community.”

Established in 1979 after a special UN General Assembly session, the CD is made up of 65 countries who have been divided in recent years on key issues.

The conference and its predecessors have negotiated such major multilateral arms limitation and disarmament agreements as:

• Treaty on the Non-Proliferation of Nuclear Weapons

• Convention on the Prohibition of the Development, Production and Stockpiling of Bacteriological (Biological) and Toxin Weapons and on their Destruction

• Convention on the Prohibition of the Development, Production, Stockpiling and Use of Chemical Weapons and on Their Destruction