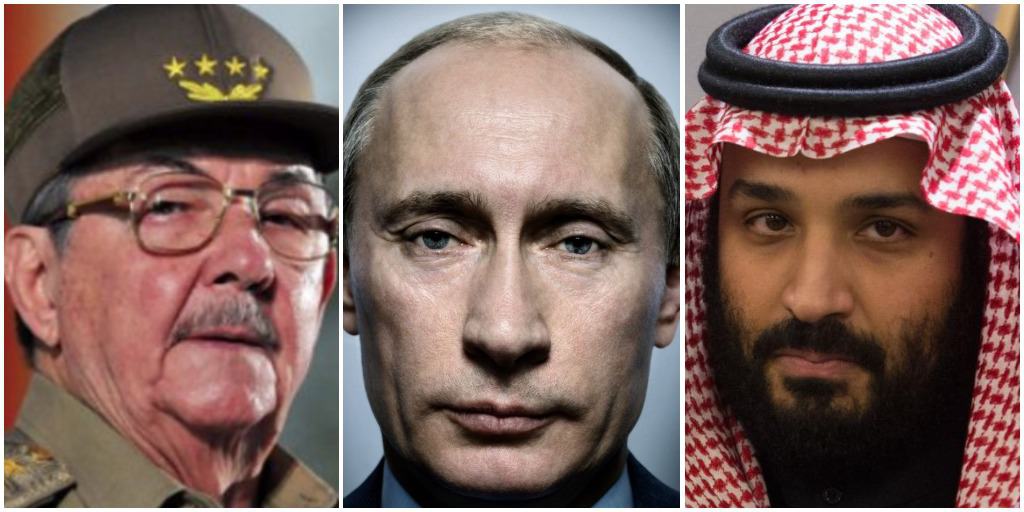 The candidacies of the three countries widely considered to have abysmal human rights records were revealed today in a report by UN Watch, a Geneva-based independent human rights group that monitors the world body.

The non-governmental organization called on Britain, France, Germany, the United States and other democracies to “vigorously oppose the election of these repressive regimes,” and to ensure there is competition in each regional group.

In October, the General Assembly will elect 15 new members to the 47-nation council, which was founded in 2006 to address situations of human rights abuses around the world.

“Electing Russia, Cuba or Saudi Arabia as a UN judge on human rights is like asking the foxes to guard the chickens,”said Hillel Neuer, Executive Director of UN Watch.

“These are authoritarian and repressive regimes that systematically deny basic freedoms to their people. They have also denied entry to many of the council’s own experts who sought to visit and investigate human rights abuses. By any measure, these regimes are not qualified to serve on a body that shapes global human rights standards, and is charged with addressing violations and protecting victims.”

Seats on the council are allotted to regions, and countries from those regions often agree in advance on a fixed slate of candidates, eliminating any competition.

The final list of candidates — and whether Cuba, Russia or Saudi Arabia will face any competition at all — may not be known until shortly before the election by the General Assembly in October 2020, in which 193 members can vote.

In their candidacy filings and other submissions made to the UN, Cuba, Russia, and Saudi Arabia declare their commitment to human rights.

However, UN Watch’s report finds each country to be utterly disqualified, and provides 15 fact-check rebuttals to claims made by the candidates, five for each country, including:

Cuba’s pledge to the UN says it is committed to “combating racism,” yet security agents subject Afro-Cubans to racial epithets and beatings. The one-party state’s UN pledge refers to the “democratic nature of the Cuban political system,” yet Havana silences opposition figures like Jose Daniel Ferrer, who was just released from prison after six months behind bars, convicted on false charges, where he was tortured.

Russia’s pledge to the UN says it opposes “interference in the internal affairs of states,” yet it routinely wages disinformation campaigns against Western democracies, including during the Coronavirus pandemic. Russia claims “strict compliance” with international law and human rights obligations, yet a UN report last month accused the regime of war crimes for bombing civilians in Syria.

Saudi Arabia has not yet published its campaign pledge, but submitted a report to the UNHRC, in its most recent mandatory review, claiming a stellar human rights record. The regime claims to use the death sentence only for “serious crimes,” yet executed 184 people in 2019—a record number for the kingdom. Saudi Arabia claims “protection of women’s rights,” yet jails and tortures women’s rights activists who protest the country’s discriminatory policies such as the male guardian requirement.

“The election of Cuba, Russia, and Saudi Arabia—regimes which systematically violate the human rights of their citizens—would cast a shadow upon the reputation of the United Nations,” said Neuer.

“It will be an insult to their political prisoners and many other victims—and a defeat for the global cause of human rights—if the UN helps gross abusers act as champions and global judges of human rights,” said Neuer.

“It would be absurd if the UN disregarded its own rules and principles by rubber-stamping the election of Cuba, Russia, and Saudi Arabia—even though these regimes systematically violate the human rights of their own citizens and consistently frustrate UN initiatives to protect the human rights of others,” said Neuer.

In October 2019, Venezuela was nearly defeated with the late entry of Costa Rica, showing that Cuba can lose the election if democracies encourage other countries to run in the Latin American and Caribbean group.

UN Watch also led a successful campaign in 2016 against Russia’s bid for a council seat, again showing that the nations of the world can reject gross abusers if they so choose.

“The Cuban dictatorship does not belong on the UNHRC. The regime nowadays is taking advantage of the COVID-19 pandemic to harass and further limit the fundamental freedoms of citizens, penalizing any criticism or petition on social networks in wake of the increasing shortages, hunger, and health crisis, a consequence of the characteristic inefficiency of a centralized society where the only employer is the State.

These state acts of repression during the the COVID-19 pandemic have included beatings to those who took photos of crowds standing in long lines, of a government building in ruins, or for exposing abuses carried out by officers and bureaucrats.

This is a government that keeps more than 8,000 innocents in prison after trials without any procedural guarantees. The prisoners are now at serious risk of contracting coronavirus and other diseases typical of unhealthy conditions in prisons and government neglect. Among these prisoners is the evangelical pastor Ramón Rigal, whose only “crime” was educating his children at home (homeschooling, an approach which is internationally recognized to be effective).”

“Regrettably, when the UN itself ends up electing human rights violators to the Human Rights Council, it indulges the very of culture of impunity it is supposed to combat. The world’s democracies must join in the preservation and protection of the Council’s mandate, and not end up accomplices to its breach.”

“Sadly, I am not surprised. It is a pattern that keeps repeating itself over the years: States known for their human rights violations are nominated for the membership of the Human Rights Council. As if the intention is to undermine the credibility and work of a body responsible for upholding universal human rights. Saudi Arabia is violating human rights with impunity, and continues its dismal treatment of Saudi activists for human rights and women’s rights. And yet, it is nominated, again, to the Human Rights Council’s membership. Disgraceful is the word that comes to my mind.

“If there ever was an embodiment of the proverbial ‘fox guarding the henhouse,’ it is the Putin regime’s claim to a seat on the UN Human Rights Council. A regime that violates the most basic rights and freedoms of its citizens — including the right to free elections, freedom of the press, and freedom of assembly — and that consistently refuses to cooperate with international oversight mechanisms — including, most recently, with the OSCE rapporteur on the Boris Nemtsov murder case — has no place on the world’s leading human rights body. It is my hope that the Kremlin’s candidacy will be decisively rejected.”

Report on UNHRC Candidacies of Cuba, Russia & Saudi Arabia for 2021-2023 Term
Next Post