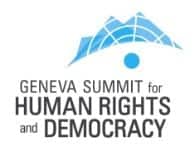 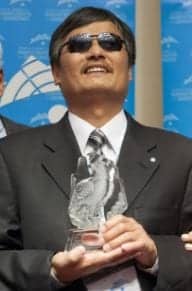 yesterday from an international assembly of human rights groups, where dissidents shared harrowing testimonies of human rights abuses ahead of Monday’s gathering of foreign ministers at the United Nations Human Rights Council.
Hundreds of dissidents, activists, diplomats and journalists gathered from around the world yesterday for the 2014 Geneva Summit for Human Rights and Democracy, the annual civil society forum that works to place urgent situations on the UN agenda.
The summit was organized by the Geneva-based human rights group UN Watch, supported by a cross-regional coalition of 20 NGO co-sponsors.
UN Watch chairman Alfred H. Moses presented the award to Chen, a former political prisoner who escaped house arrest in 2012, “for inspiring the world with his extraordinary courage in the defense of truth, justice and human rights.”
Chen, who has been blind since childhood, taught himself law and exposed forced abortions and sterilizations in his native Shandong Province before his imprisonment by local authorities.
In a drama covered on front pages worldwide, Chen escaped house arrest in China in May 2012 and sought refuge at the U.S. embassy in Beijing before moving to the United States.
“People who live in democracy and freedom don’t realize how important they are to them, but people who are oppressed understand that democracy and freedom are very important,” he said.
Dissidents or members of their families from countries including Syria, Iran and Cuba were present at Tuesday’s conference.
With the world’s spotlight trained on North Korea following a stinging UN report into the regime’s mass atrocities, prison camp guard turned human rights activist Ahn Myong Chul explained that 90 percent of inmates don’t even know the reason for their incarceration, punished for “crimes of their grandfathers.” 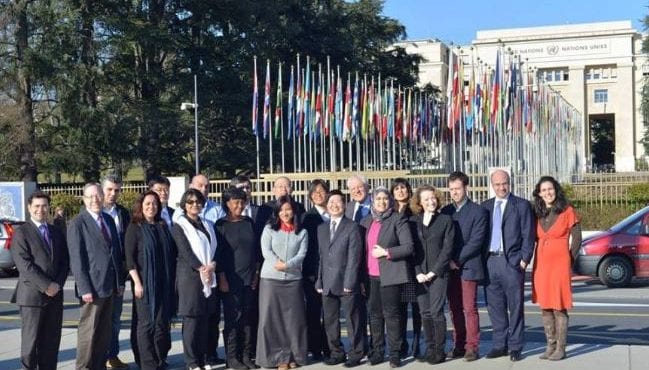 Also in attendance was the aunt of Venezuelan opposition leader Leopoldo Lopez, arrested by security forces on February 18 after a series of protests brought tens of thousands onto the streets of

Julieta Lopez read out a statement from her from nephew.

“Only dictatorships send dissidents to prison and if the government puts dissidents in prison, they accept openly that Venezuela is a dictatorship. The emperor has no clothes,” she said. 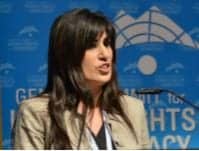 Naghmeh Abedini (left), wife of jailed Iranian-American pastor Saeed Abedini, says she believes now is a good time for the United States to pressure Iran to release her husband, who was arrested for teaching Christianity.

“At present my husband is suffering from internal injuries that resulted from beatings, but the Iranian government is denying him the necessary medical care needed to treat those injuries,” Abedini told the conference.
“Freedom of religion, including the right to change one’s religion, is a God-given right of all people, including the Iranian people. No human law should infringe upon that right.” 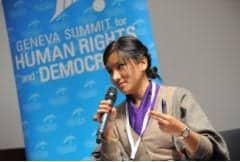 “We must make sure China remains accountable for its actions. They sit proudly on the UN Human Rights Council, on the Security Council, and dictate how Syria should deal with its situation,” said Tenzin Dhardon Sharling, the youngest member of Tibet’s parliament in exile.
She also criticized the UN High Commissioner for Human Rights, saying, “Navi Pillay ends her second term in September and still has not visited Tibet.” 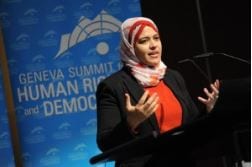 “During Mubarak’s time, women were only mentioned to decorate the regime,said Egyptian women’s rights activist Dalia Ziada, who heads Cairo’s Ibn Khaldun Center for Development Studies..
“Under the Muslim Brotherhood, laws were made for early marriage for girls and genital mutilation.”
Conference organizers said that one invited speaker from Cuba, human rights activist Jorge Luis García Pérez, known as “Antúnez,” was brutally arrested after State security forces raided his home on February 5, and barred from leaving Cuba to attend the Geneva event. 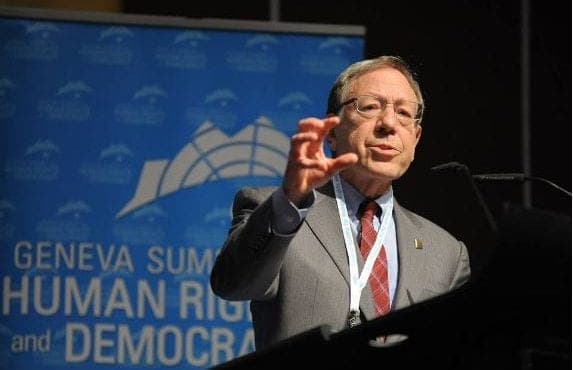 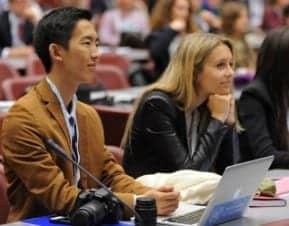 “I have devoted these past 25 years to work in common cause with others for the freedom of political prisoners, who represent hope and inspiration for their country, for their people, and for humanity as a whole, said Canadian parliamentarian and human rights advocate Irwin Cotler (above), in his opening address to the conference, offering a model on how to defend dissidents behind bars.
“I’ve learned from these political prisoners… we must speak on behalf of those who cannot be heard; bear witness on behalf of those who cannot testify; act and advocate on behalf of those who have put not only their livelihood, but their very lives on the line.”
“We will come out of the shadows of darkness into the light of freedom.”
In the final session, UN Watch executive director Hillel Neuer, who chaired the summit, welcomed the fact that the UN Human Rights Council was expected next month to adopt resolutions on Syria, North Korea and Iran. 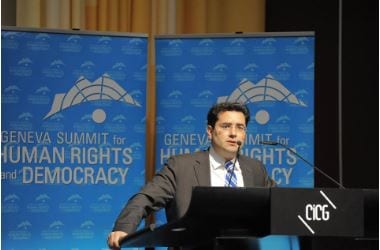 However, Neuer regretted that the council was planning to turn a blind eye to most of the country situations addressed at the session.
Despite testimony from activists and victims about abuses by Egypt and Cambodia, and about slavery in Mauritania, none of these countries is yet on the council’s agenda, though they should be, he said.
And despite hearing from victims of gross violations of human rights from China, Cuba, Pakistan, Russia, Saudi Arabia, Vietnam and Venezuela—each of these countries is a recently-elected member of the 47-nation council, said Neuer, and the regimes enjoy impunity.
Le Monde’s Annick Cojean, author of the book “Gaddafi’s Harem,” described how the Libyan dictator raped thousands of women and girls on a systematic basis over four decades.

Yet across the street today, the UN Human Rights Council was addressed by Jean Ziegler, one of its longest-serving officials, who in 1989 created the Moammar Qaddafi Human Rights Prize, an award he received himself at a 2002 ceremony in Tripoli, Libya.
Ziegler, who for 11 years denied receiving the award until video proving otherwise was released in September, attacked the United States for human rights abuses, and strongly praised the Cuban government. Cuba created Ziegler’s original UN post in the year 2000.