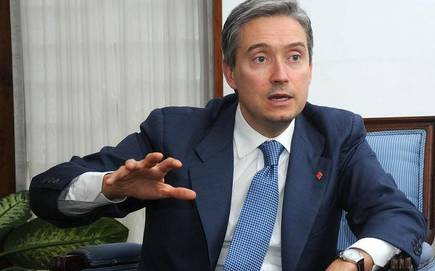 Canadian Foreign Minister François-Philippe Champagne is “surprised” by Nikki Haley’s criticism of his government’s UN vote against Israel, designed to curry support for Ottawa’s bid for a UN Security Council seat, as a “deal with the devil.”

“These are words that surprised me,” Champagne said . “I know in what state of mind Canada did it. I will leave others their comments, but I think people understand very well why Canada did this.”

From his interview with Canada’s La Presse:

Perhaps Canada’s vote in favor of self-determination for Palestinians on a UN resolution — an initiative sponsored by Egypt, among others — will be discussed during the trip [to Africa].

An affront against Israel that Minister Champagne does not see as a change of course. In fact, it is — because for fifteen years, Ottawa was always, with the United States, against the UN resolutions condemning the Jewish state.

“There are times, sometimes, when Canada has to make its voice heard, and we did it in this way, but that does not change our support for Israel and the Canadian Jewish community,” says the Minister.

This stance inspired former US ambassador to the UN Nikki Haley to react with vitriol. Ottawa has “made a pact with the devil,” she jeered, attributing this move to the Canadian quest for a seat on the Security Council.

“These are words that surprised me,” said François-Philippe Champagne. “I know in what state of mind Canada did it. I will leave others their comments, but I think people understand very well why Canada did this.”