GENEVA, March 20, 2018 – As reported now in the New York Times, the Chinese government today interrupted UN testimony (see below) by one of its most well-known former political prisoners, who took the floor on behalf of the Geneva based human rights group UN Watch, as he addressed the 47-nation Human Rights Council in Geneva. China lashed out at the end, saying in a right of reply that “NGOs and individuals with ulterior motives use this forum to fulfill their evil purposes.”
Before the speech, one of the Chinese government delegates sought to intimidate the speaker, Dr. Yang Jianli, by taking pictures of him outside the hall for more than 10 minutes. UN Watch has filed a formal complaint with UNHRC President Vojislav Šuc, demanding that the Chinese delegate—believed to be Mr. Wei Zhimin (see photo below)—be permanently expelled from the UN.
Only moments into his speech, Dr. Yang was interrupted by China, which falsely claimed that he was not properly accredited with UN Watch. In two other interruptions, China claimed that Yang was not addressing the correct topic, which was universal human rights as enshrined in the 1993 Vienna Declaration.
In 2014, as reported in the New York Times, China also spied on and intimidated a Chinese human rights defender brought by UN Watch. In 2015, Reuters reported on China’s escalating use of intimidation tactics to silence its critics at the UN. 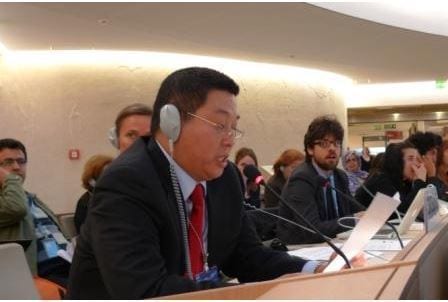 Reaction by Dr. Yang Jianli:
“The Chinese delegation were trying to intimidate me, but their efforts were in vain. They should know me better: I endured lengthy solitary confinement, and even a death threat.”
“I really appreciate that UN Watch granted me this rare opportunity to directly confront the Chinese government, and to make the true voice of the Chinese people heard at the UN and before the world, to give a voice for the voiceless.”
“The videos of  my speech and the Chinese delegation’s reply will be circulated back in China and the people back in China will be excited about the confrontation and interested in comparing what was said by the government with what was said by people like myself, on such an influential international stage, and deciding for themselves who was right.”
See full text below of Dr. Yang Jianli’s speech as delivered before the UN, and China’s reply.

Thank you, Mr. Chairman. My name is Yang Jianli and I am a Chinese citizen.
I am honored to take the floor on behalf of United Nations Watch.
I would like to first put forth a question for everyone: Does the People’s Republic of China deserve a seat here?
Since its founding in 1949, the Communist Party of China (CCP) regime has long advocated the Theory of Class Struggle. In the process of carrying out ruthless crackdowns on anti-revolutionaries, land reforms, industrial and commercial reforms, the Anti-Rightist Campaign, the Great Leap Forward, the Cultural Revolution, the Tiananmen Square Massacre, the persecution of Falun Gong, the suppression of the Democracy Party of China, the crackdown on the signatories of Charter 08, and other campaigns and incidents, it has committed a vast number of human rights violations, directly causing the deaths of tens of millions of people.
Since 2012, the CCP regime has made vigorous efforts to generate personal worship, to abolish the country’s presidential term limit, and to transform China from a totalitarian state further into a personal dictatorship or even a personality cult. The narrow freedom that was once achieved through the struggle of civil society was again aggressively suppressed. In the past five years, the CCP regime has committed round after round of vicious human rights violations, including the strengthening of communist ideology, the intensifying of the censorship of online speech and the persecution of lawyers and petitioners, the heightened implementation of suppressive discriminatory policies in Tibet, Xinjiang and Inner Mongolia, the wanton demolition of churches, and the expulsion of so-called low-end populations in big cities such as Beijing.
Unfortunately, time does not allow me to enumerate all the cases of human rights abuses taking place in China. I want to close by asking the question again: Should the CCP regime, a regime that totally disregards the Universal Declaration of Human Rights and contravenes the UN human rights covenants, be eligible to represent China on the UN Human Rights Council?
Thank you, Mr. President.
China’s Right of Reply:
“I want to protest that some NGOs are taking advantage of this forum to tarnish the image of China. The Chinese Communist Party leadership was chosen by the people and by history. China, under the leadership of the  Chinese Communist Party, has made massive progress in all respects, including human rights. The people of China enjoy numerous human rights. The Chinese Communist Party leadership is supported by people across China. I don’t want to see it happen again that NGOs and individuals that have ulterior motives to use this forum to fulfill their evil purposes.” 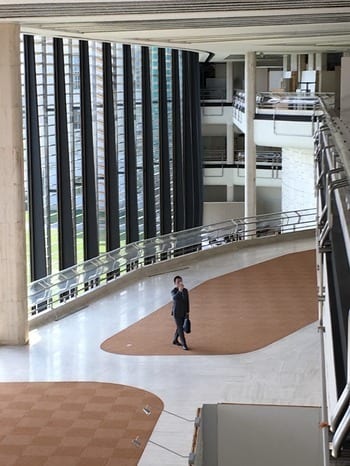