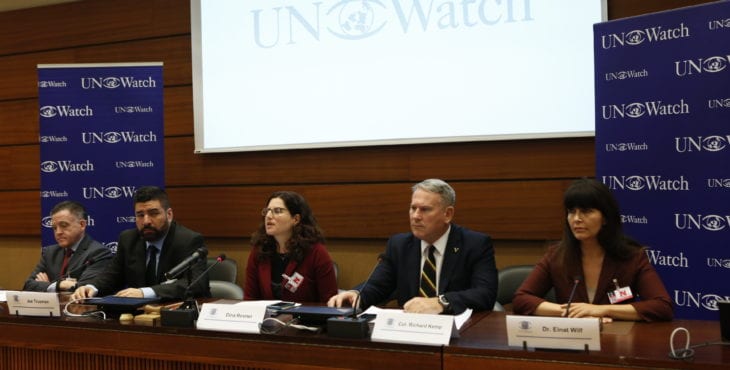 GENEVA, March 18, 2019 — In testimony this morning at the United Nations, a panel of military and legal experts rejected a report presented by the UN Human Rights Council which accuses Israeli soldiers of alleged “war crimes” and “crimes against humanity” on the Gaza border, and calls for their arrest. CLICK HERE FOR VIDEO.
Speaking before diplomats and activists attending a side event in the UNHRC organized by the non-governmental organization UN Watch, Lieutenant Colonel Geoffrey S. Corn (ret.), a law professor who formerly advised the U.S. Army on the laws of war, and Col. Richard Kemp, the former commander of British forces in Afghanistan, cited structural, legal and operational defects with the UN’s inquiry, and said the report promoted false claims.
By wrongly framing the Gaza border violence as “predominantly civilian protests,” said Corn, “the Commission of Inquiry distorts the reality of what it confronted.”
“By omitting from the UNHRC inquiry reports of the use of human shields by Hamas, the report incentivizes these terror tactics in the future, and the risk posed to the civilian population of Gaza is exacerbated. If we are really concerned about mitigating harm done to civilians, we should be condemning Hamas’ actions and this report,” he said.
The UN report called on the UN High Commissioner for Human Rights “to manage the dossiers on alleged perpetrators,” referring to Israeli soldiers, “to be provided to the International Criminal Court.” In the UNHRC plenary this morning, council members Pakistan, Cuba, Iraq, Qatar, Saudi Arabia and others welcomed the report, as did observer states such as Syria, Venezuela and Russia.
Kemp, an expert on national security and counter-terrorism, had testified before the UN inquiry and was present at the Gaza border himself.
“The United Nations has played directly into Hamas’ hand and the UNHRC is but an instrument of Hamas terrorism. This report, as well as countries that vote for it, encourage Hamas towards further terrorism in the future,” he said, adding that his personal testimony to the inquiry was completely ignored in the report.
Dr. Einat Wilf, a former member of Israel’s parliament and co-author of “The War of Return,” said that understanding the motivations of Palestinian “marchers” is crucial to understanding the Israeli response.
“Those who come to the border marching in the name of the so-called ‘right of return’ are not rioting against Israel’s blockade, but rather are coming to destroy Israel. This needs to be understood as a declaration of war, and nothing less than that. The Israeli response cannot be understood if this is not understood,” she said.
EXPERT INVESTIGATION REVEALS THAT COMMISSION’S ALLEGED VICTIMS ARE KNOWN MILITANTS
Joe Truzman, an expert on Palestinian militant groups active on the Gaza border with Israel, presented evidence revealing false accusations and omissions of key facts in the UN report, including that five “victims of IDF gunfire” named in the report were actually members of militant groups including Hamas.
Following are militants who Truzman showed were falsely characterized in the reports:

• Mahmoud Abu Taima: The UN report claims that Taima was killed approximately 150 meters from the fence, but the report failed to mention he was a fighter of Hamas’ military wing, al-Qassam Brigades, as listed on one of their websites.
• Abed Hawajri: The report notes that Hawajri was shot in the abdomen 150 meters from the fence, but neglects Hawajri’s affiliation with the Democratic Front for the Liberation of Palestine (DFLP). Hawajri was a field a commander in the DFLP’s military wing and was one of the founders of the ground in the Nusierat camp in Gaza. Video evidence shows that DFLP militants surrounded his funeral.
• Jihad Abu Jamous: The Commission of Inquiry stated in its report that Jamous was shot in the head approximately 300 meters from the security fence, but did not mention that he was a militant in the al-Aqsa Martyrs Brigades. Jamous was also a field commander of the al-Amoudi Brigade, a branch of the al-Aqsa Martyrs Brigades.
• Ahmed Sha’ar: Sha’ar was described in the Commission’s report as a child killed by the IDF on May 14. Evidence from the Palestinian Islamic Jihad website reveals that Sha’ar was a fighter in Saraya al-Quds, the militant wing of Palestinian Islamic Jihad.
After presenting his evidence, Truzman concluded that the inquiry’s misleading identification of militants as civilian victims leads to a skewed perception of the Israeli response.
“Contrary to the commission’s report, Palestinians present during March of Return demonstrations and riots were armed. Such militant activity is still present within Palestinian border units,” said Truzman.
• For quotes from each speaker, click here.
• Photos
• Video
For video on UN Watch’s public rally today calling for an end to the UN’s anti-Israeli discrimination, featuring ambassadors, members of parliament, and public intellectuals, click here.