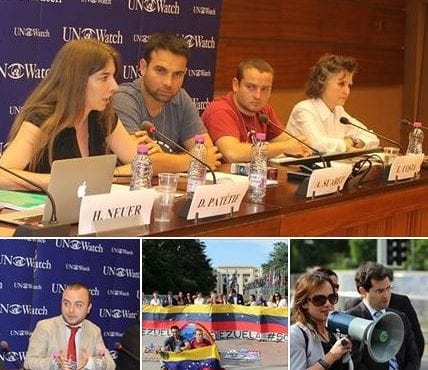 sterday about being subjected to arbitrary arrest, torture and other human rights abuses, sparking shouts and accusations from delegates of both governments, who sat in the corner of a packed Geneva hall huddled with allied delegates from Syria, North Korea and other dictatorships.
However, U.S. Ambassador Keith Harper delivered strong remarks (see below) in support of human rights protection in both countries.
“We were afraid to come here today,” said 33-year-old Alejandro Suarez Teppa, a Venezuelan philosophy student and protest camp leader who was arrested and brutally detained last month.
He was joined on the podium by Eusebio Costa, 22, also a student protest leader from Caracas.
Also, an outdoor rally to honor the young activists was held in front of the UNHRC after the panel. Click here for photo album; selected hi-res photos here.
Invited by the non-governmental human rights group UN Watch, which organized yesterday’s panel at the UN Human Rights Council in Geneva as well as a press conference today, both students made the journey in defiance of a televised attack against them by powerful National Assembly President Diosdado Cabello.
“These students are human rights heroes who put their freedom and safety on the line for the basic democratic freedoms that so many of us take for granted,” said Hillel Neuer, executive director of UN Watch. 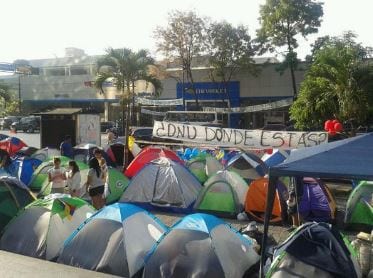 “Despite the real risk of reprisal back home, and insults hurled at them here at the UN by their own countries’ delegates, the students succeeded in speaking truth to power.”
Neuer called on the UN to “heed their calls and send an expert mission to investigate the worsening situation in Venezuela, which must be held to account as an elected member of the Human Rights Council.”
Addressing the outdoor rally, Neuer echoed the banner of the students’ Caracas protest camp (see right), asking “ONU, donde estas” — “UN, where are you?”
Yesterday’s panel also heard from Ángel Carromero, the driver in the suspicious crash that killed Cuba’s most famous pro-democracy figure, Oswaldo Payá. (See below.)
María Corina Machado, a leading Venezuelan opposition figure with 2 million Twitter followers, sent a video message expressing solidarity.(See video message here.)
QUOTES FROM VENEZUELAN DISSIDENTS
Eusebio Costa 22-year-old student activist, President of the Student Center at the Catholic University Santa Rosa in Caracas; member of the protest camp in Las Mercedes:

“”We came to Geneva to ask the U.N. to send a mission to Venezuela to evaluate the cases of human rights violations that students have been subjected to.”
“[The Venezuelan government] has been talking about a conspiracy that we are part of a war, that we were sent here by the CIA, which we weren’t.”
“Thirty-two people were murdered while protesting; I hope that the United Nations will not remain indifferent to violations in Venezuela.”

He recalled witnessing students being shot in February and said his student camp was attacked on the night of May 8: “They put drugs and weapons inside the camps and U.S. dollars to indicate we were financed by foreign powers,” he told reporters, saying he was beaten then held in isolation for 72 hours.”
“We urge the United Nations to investigate the abuses.”

“My nephew [Leopoldo Lopez] has been imprisoned for speaking on behalf of an ill-treated nation. He was put in solitary confinement in harsh conditions for promoting peaceful protest.”
“[The Venezuelan government] are accusing him [Lopez] of having used subliminal language inciting people to take to the streets, and having killed the students; it was not him, but the police!”

“We ask the Council to condemn the arbitrary arrest of Jorge Luis García Pérez.”
“The main road has huge holes, but the Cuban government said we were going 160km per hour, which is impossible.”
“The accident took place two years ago and the family hasn’t had any access to the autopsy; I’m asking you to have common sense.”

Regis Iglesias, Cuban poet, arrested with 74 other dissidents during the notorious 2003 Black Spring crackdown, Amnesty International prisoner of conscience. Exiled to Spain in 2010, he is spokesman for the Christian Liberation Movement:

“Cuba’s socialist system is an oppressive system.”
“Listen to the victims of oppression; we’ve been governed for the last 50 years by the same family.”

QUOTES FROM U.S. AMBASSADOR KEITH HARPER
On Venezuela:
“Venezuela cannot solve its problems by criminalizing dissent.”
“Venezuela infringes upon fundamental freedoms, using violence against protesters and journalists, restricting the media and Internet.”
On Cuba:
“We call for the release of Alan Gross, detained since 2009 for merely facilitating access to the Internet Cuba.”
“We reiterate our call for an independent international investigation into the death of Oswaldo Payá.”
“We have a simple question: What is Cuba afraid of?”
Tweet: “Cuba [is] trying to stifle dissent at the UN, just as it does at home.”
RESPONSE FROM VENEZUELAN REPRESENTATIVE
Venezuela to Amb. Harper:
“We have the greatest amount of oil; you [the United States] have the greatest empire and you are trying to take our resources.”
On Leopoldo Lopez:
“He [Lopez] is in a civil and military government prison and protected by all constitutional and legal rights.”
RESPONSE FROM CUBAN REPRESENTATIVE
“This is clearly a program of the United States to undermine Cuba, and they have given these speakers money to participate.”
“Angel Carromero, the U.S. is your boss!”
NGO Statement for Jorge Luis Garcia Perez “Antúnez” and Yris Tamara Pérez Aguilera, read out at UNHRC press conference in Geneva, 18 June 2014

On June 11, 2014, Cuban authorities arbitrarily detained and assaulted Jorge Luis Garcia Perez “Antúnez” and Yris Tamara Pérez Aguilera. Government agents twice choked Antúnez into unconsciousness, reviving him with injections of an unknown substance.
They were released on Friday, June 13, only to be again arbitrarily arrested and detained on Sunday evening, June 15. The two human rights defenders are currently being threatened with a political trial and lengthy prison terms.
Reports from other activists indicate that officials have been subjecting Yris Tamara Pérez Aguilera to beatings during her ongoing detention.
We call upon UN Secretary-General Ban Ki-moon, Human Rights High Commissioner Navi Pillay, EU Foreign Minister Catherine Ashton and U.S. Secretary of State John Kerry to demand that Cuba comply with its obligations under international law, and with its obligations as an elected member of the UN Human Rights Councik, to immediately release both pro-democracy activists, and to cease and desist from any further acts of violence against them.
Signatories
Directorio Democratico Cubano
UN Watch
Christian Liberation Movement
Iniciativa por Veneuzela
Angelo Carromero, Spanish politician
Alejandro Suarez Teppa, Venezuela student protest leader
Eusebio Costa, Venezuela student protest leader

PrevPreviousIssue 493: Why Does the U.N. Elect Syria to Top Positions?
NextUN Expert on Eritrea should make additional recommendationsNext