Geneva, Switzerland – The day before Iran’s President Ahmadinejad addresses the UN Durban Review Conference on discrimination, a well-known ex-prisoner of the regime will address a historic NGO human rights gathering to call attention to the human rights victims and political prisoners in Iran. 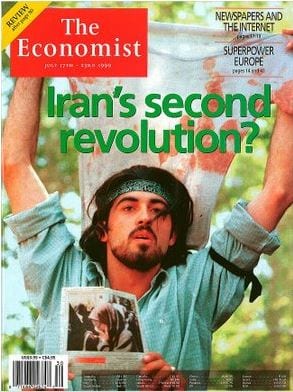 Former prisoner of conscience Ahmed Batebi was made famous when his picture appeared on the cover of The Economist, holding the bloodied t-shirt of a fellow student demonstrator.

As the final preparations are arranged for the historic Geneva Summit for Human Rights, Tolerance and Democracy, Iran and other countries whose violations will be highlighted at the Summit are voicing concern at the prospect of their most famous dissidents telling their personal accounts to a global audience.

Speaking on April 6th at a “Durban II” working group, the Iranian envoy in Geneva — apparently concerned about potential scrutiny of Iran’s treatment of women, ethnic and religious minorities, and gays — protested in a UN session that the Geneva Summit will be taking place in the best venue in the city, the international convention center directly facing the UN.

Batebi spent many years as a thorn in the side of the Iranian government. He became famous when a picture of him holding the bloodied shirt of a fellow student demonstrator appeared on the front page of The Economist. The photo was called “an icon for Iran’s student reform movement.” Shortly after the photograph hit newsstands, Batebi was arrested and sentenced to death, a sentence that was reduced to 15 years in prison after international outcry.

Batebi was regularly tortured during his time in prison, and managed to escape to Iraq, later Austria, and eventually the United States while he was temporarily hospitalized for medical care after two strokes and numerous seizures.

“I never intended to be a famous dissident,” says Batebi. “Now that I have been granted asylum and am safe, it is my responsibility to tell my story and speak out for all those in Iran who still can not. I take this responsibility very seriously.”

Ahmed Batebi is one of many famous dissidents speaking at this historic summit. They will gather to share their stories and call on the United Nations to address some of the most grave human rights situations throughout the world.

What: The Geneva Summit for Human Rights, Tolerance, and Democracy