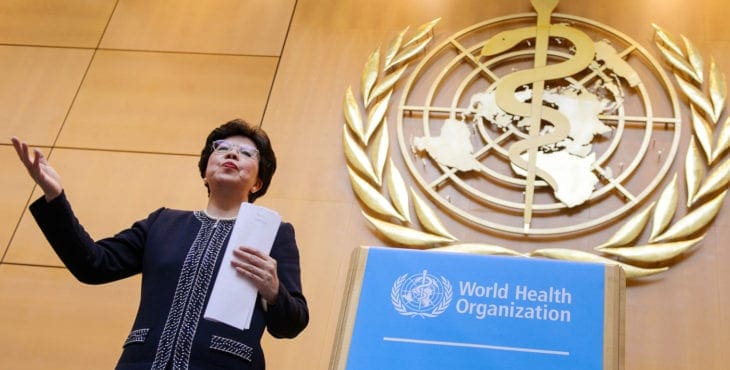 Take Action: Sign the Petition
At the recent UN World Health Assembly, why did the UK, France, Germany and other EU states vote for a politicized resolution—co-sponsored by the Arab states and the Palestinians—that singled out Israel as the only alleged violator of “mental, physical and environmental health”? Why didn’t they join Australia, Canada and the U.S. in rejecting the hijacking of a vital world body?  CLICK HERE to urge EU leaders to disavow their shameful WHO vote

Q – I read that the European Union and Germany have tried to deny, downplay or justify their vote, implying that they didn’t really single out Israel. Is it true that the final WHO text supported by the EU was devoid of any criticism of Israel?
A – No, that is demonstrably false. By voting for and supporting the resolution, adopted on May 25, 2016, the EU and its member states did the following:

1. Requested the Director-General of the World Health Organization to produce a report “on the health conditions in the occupied Palestinian territory, including east Jerusalem” and “in the occupied Syrian Golan,” with special focus on … “the effect of Israeli actions harming the environment, including the dumping of waste materials which pose a health threat to the civilian populations.” (Op.1 and Op. 1(f))

2. Perpetuated the singling out of Israel once again on the agenda of next year’s 2017 meeting of the WHO, by calling for the Director-General to “to report and make practical recommendations” on the health conditions in the occupied Palestinian territory, including east Jerusalem, and in the occupied Syrian Golan, to the Seventieth World Health Assembly. (Op.1)

3. Perpetuated, by doing the above, a repetition in 2017 of the entire singling out of Israel at the WHO, just like what was featured this year: a special debate, three lopsided reports, the resolution, and the publication of country submissions, including an inflammatory 59-page Palestinian submission — with fake photographs — which complains of a “racist separation barrier”; and a Syrian submission laced with anti-Semitic conspiracy tropes, alleging that “the Israeli occupation authorities” continue “to experiment on Syrian and Arab prisoners with medicines and drugs and to inject them with pathogenic viruses.” Out of 24 items on the WHO assembly’s agenda, only one, Item No. 19 against Israel, focused on a specific country. The EU and its member states have now perpetuated the same for next year.

5. Enumerated a long list of implied Israeli violations. Disingenuously, the the text in many cases avoids mentioning the actualy word Israel—even as the resolution commissions a report on policies and practices that are necessarily attributed to alleged Israeli wrongdoing, such as:

a. “Physical and procedural barriers to health access in the occupied Palestinian territory, including as a result of movement restrictions and territorial fragmentation…”  Op. 1(a)

b. “Delay or denial of ambulance service, and the harmful effects of the “back-to-back” procedure for the ambulance transfer of patients across checkpoints…” Op. 1(b)

e. “The impact of prolonged occupation and human rights violations on mental, physical and environmental health and on the development of a sustainable health system in the occupied Palestinian territory…”  Op.1(e)

f.  “The effect of impeded access to water and sanitation, and food insecurity, on health conditions in the occupied Palestinian territory…”  Op.1(f)

By contrast, the UN assembly did not address Syrian hospitals being bombed by Syrian and Russian warplanes, or millions of Yemenis denied access to food and water by the Saudi-led bombings and blockade. Nor did the 69th World Health Assembly adopt a resolution on any other country in the world.

Video of Country Statements and Votes

Statements by Iran, European Union, Syria, USA, Canada, and others:

Countries call out their votes:*
*

Yadlin on 35th anniversary of Osirak: "Every pilot fought to be in the group of eight to fly"
Whistleblower quits UN human rights office, cites "complete impunity" over child rape by peacekeepers