In a story reported worldwide by CNN, BBC and other major media, Hong Kong-based producer and singer, a pro-democracy and LGBTQ rights activist popularly known as HOCC, took the floor today at the UN’s 47-nation Human Rights Council, speaking on behalf of the Geneva-based non-governmental human rights group UN Watch, in a visit to Geneva co-sponsored with the Human Rights Foundation, sponsor of the annual Oslo Freedom Forum. 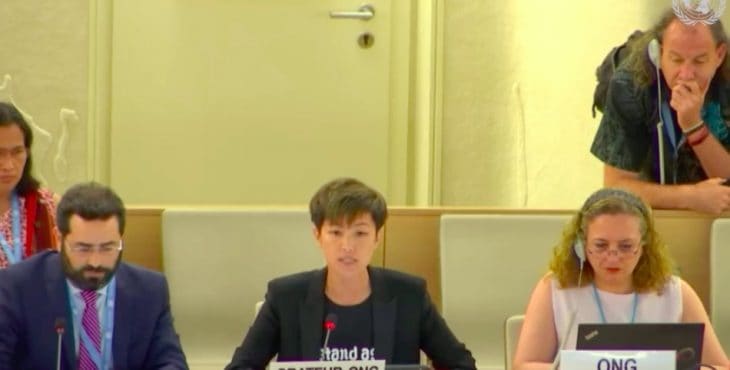 “Hong Kong is a vital bastion of freedom and democracy in Asia. When millions of its citizens cry out for help as China tightens its vise, in breach of solemn obligations to preserve the island’s autonomy, the UN’s highest human rights body cannot turn a blind eye,” said Hillel Neuer, Executive Director of UN Watch.

“We need an end to immunity for Beijing through the convening of a special session that will finally examine China’s gross and systematic human rights abuses, and we need the UN to remove this repressive regime from the Human Rights Council,” Neuer added.

The Vienna Declaration guarantees democracy and human rights. Yet in Hong Kong today, these are under serious attack.

“There is a Point of Order. I give the floor to China.”

“Mr. Vice President, I’m asking for the floor to raise a Point of Order. The Hong Kong Special Administrative Region is a part of the People’s Republic of China. Just now, this [so-called representative of the NGO], in her speech, mentioned Hong Kong side-by-side with China. This is affront to the principle of One China and the principle of the UN Charter. I’d like to ask you, Mr. President, to urge her to use standardized UN formulation when referring to places.”

“Dozens were arrested. Four people committed suicide as an ultimate cry of despair.

This anger of Hongkongers follows years of deceitful promises. Since the handover, we saw our autonomy slowly eroded. Disqualification of six lawmakers, kidnappings of booksellers and activists jailed, are proof of China’s tightening grip. Real universal suffrage is still nonexistent, with a Chief Executive Officer appointed and controlled by Beijing, China is preventing our democracy at all costs.

Mr. President, the Sino-British Joint Declaration is a binding treaty registered with the UN. Yet, after only 22 years, China is denying its obligations. The “One Country, Two Systems” is nearing its death.

“There is a Point of Order. I give the floor to China.”

“Mr. Vice President, I’d like to ask for the floor to again raise a Point of Order. Just now, the speaker has made unfounded allegations to the system of ‘One Country, Two Systems.’ We categorically reject this. We’d like to ask you to remind her not to use abusive language in her speech. I thank you.”

Chair: “I please ask the speaker to take note of the points made by China while I give back the floor to her.”

“Will the United Nations convene an urgent session to protect the people of Hong Kong?

Given its abuses, will the UN remove China from this human rights council?

“A certain NGO abused its consultative status, violated the relevant stipulations of the Human Rights Council regarding the NGO participation, and engaged in slandering and accusation on China’s sovereignty and internal affairs. China expresses its strong condemnation and opposition. Since the return of Hong Kong, the policy of ‘one country, two systems’ and Hong Kong people governing Hong Kong with a high degree of autonomy has been faithfully implemented.

The rights and freedoms of Hong Kong residents have been fully guaranteed according to law. The facts are there for all to see. Maintaining Hong Kong’s prosperity and stability serves not only China’s interests but also the interests of all countries across the world.

Hong Kong is a Special Administrative Region (SAR) of China. The affairs of Hong Kong are purely China’s internal affairs and beg no interference from any organization or individual or country.

With regards to the legislative amendment on Hong Kong SAR, this process is to facilitate a handling of cases of homicide allegedly committed by Hong Kong residents in Taiwan. The process, if adopted, would help to fulfill the existing legal loopholes and to fight crime and to uphold justice and rule of law. It’s necessary and legitimate. The Chief Executive of Hong Kong SAR, Madam Carrie Lam, announced on 15th of June to postpone the legislative amendment in order to listen more extensively to the society and to let the society restore to tranquility.

The central government of China expressed support, respect, and understanding of this decision. It is to be believed that the Hong Kong SAR government will engage fully with Hong Kong resistents so that people can understand that this process is in the interest of Hong Kong.

However, on the 1st of July, some extreme and radical individuals used the pretext of protesting against the legislative amendment, used the extreme violence to attack the legislative building. Their actions went well beyond the limit of freedom of speech and peaceful assembly. Their actions have trampled on the rule of law and the social order in Hong Kong.

We issue our strong condemnation. Using the so-called freedom of speech or assembly to justify violence is never tenable. The Chinese central government firmly supports the government of Hong Kong SAR and the police to exercise their lawful duty to support the action taken by the relevant institutions in the Hong Kong SAR. Thank you.” 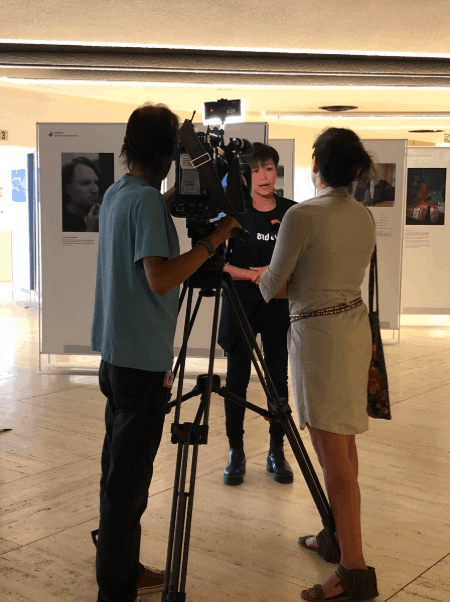 Denise Ho is interviewed outside the UN Human Rights Council following her speech on July 8, 2019. 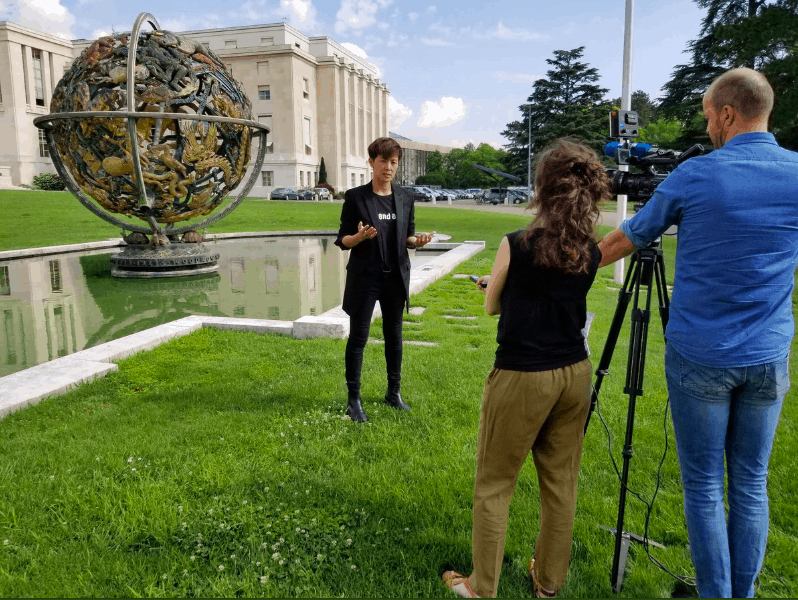 Denise Ho is interviewed outside the United Nations Human Rights Council in Geneva on July 8, 2019.