Dissidents Testify of Abuse and Torture at Geneva Rights Summit

DAY I OF GENEVA SUMMIT

Human rights hero Rebiya Kadeer called on the international community to “shine a light into one of the darkest corners of the world.” Her call was echoed by fellow panelists, Tibetan political prisoner Phuntsok Nyidron and Chinese dissident Yang Jianli, who, like Kadeer, suffered mistreatment and abuse during their imprisonments in China.

Human rights is the concern of all right thinking people,” said UN Watch chairman and panel moderator Ambassador Alfred Moses. “The repressive regime in China will not survive. Oppression cannot survive. When the Chinese regime changes, the banner that will be in the streets will the banner that says ‘Remember Tianamen Square.’”

Jianli, who participated in the 1989 Tiananmen Square protests but has been exiled to the United States, pressed the importance of the Internet in pushing forward democracy in China. “Wherever the Internet reaches, it increases government transparency for the benefit of all mankind,” he said, “The cost of censorship will outpace the cost of circumventing censorship. It will be impossible to maintain, China will not be able to control the will of a billion citizens.”

Internet freedom is a central theme of the conference, at the end of which a coalition of dissidents led by Ahmed Batebi and Jianli, will present a declaration on Internet freedom.

Panel 2: Tribute to International Women’s Day, Women and the Right to Equality 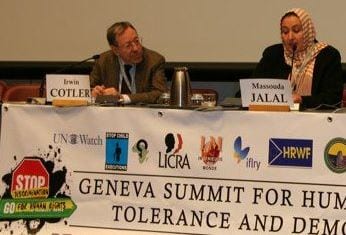 Marking the 100th anniversary of International Women’s Day, Canadian MP Irwin Cotler and Massouda Jalal, the first female presidential candidate of Afghanistan, discussed issues of discrimination against women throughout the world. “If you want to pursue justice, you must feel the injustice around you,” said Cotler. “Otherwise justice is an abstract idea.” He cited UNESCO’s characterization of discrimination of women as “gender apartheid.”

Jalal added, “Everywhere you go, women are disadvantaged. You cannot say you have improved the status of women until the lives of women in Afghanistan are improved.” She said that she ran for office to encourage other women in her country to run. “All the perceptual barriers about women participation and leadership would be instantly demolished, and if I did not succeed, I would have lead the way for women to do so in the future. I had a slim chance to win as president but I had a big chance to demonstrate that the era of women’s confinement is over.”

Among the conference participants was newly-confirmed US Ambassador to Geneva, Betty E. King, who offered impromptu remarks. “The United Nations should be a forum where all points of view are heard. Unfortunately that is not the case,” she said.

Political dissidents spoke out about the dire human rights situations in their countries: Tamar Suju of Venezuela, Jose Ramon Castillo of Cuba, Bo Kyi of Burma, and additional victims from Zimbabwe and North Korea. They called for greater international action in protection of human rights. “Until these values of universal, we cannot sleep,” said Italian PM Matteo Mecacci, who moderated the panel discussion.

Absent from the panel was Cuban dissident Nestor Rodriguez Lobaina, who was barred by the Cuban government from attending the Geneva Summit. However, he was able to send an audio message from Cuba that was played at the conference: “I am not unique in Cuba, many victims have suffered more or similar situations. In 1991, totalitarianism collapsed in the countries of Eastern Europe. The government here was very nervous. Several soldiers broke into my home and accused me of state propaganda. They took me to one of the worst torture centers and subjected to intense interrogation. I spent 90 days in punishment cells. I was considered a dangerous person for society by the Cuban regime. Cuba is the largest prison camp in the Western world. I will continue to fight for the rights of all Cubans.”

Panel 4: Genocide and the Humanitarian Challenge: Case Study of Sudan

Sudanese refugees and activists, Simon Deng and Amer Adam Hesabu, considered prospects for peace in Sudan, where “innocent people still suffer forced Islamicization and Arabicization even though we are supposedly at peace.” With the largest number of internally displaced persons in the world, Sudan hopes to hold elections next month. Yet, warned Simon Deng, “Sudan stands at a crossroads, one towards war, while at other lies a hopeful future for reconciliation.” Both expressed deep concern for improvements in the lives of Sudanese refugees, regardless of the election’s outcome. 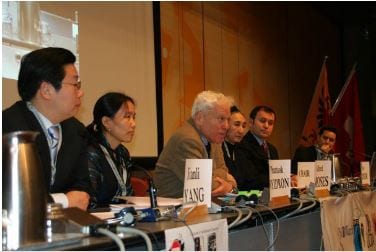 PrevPreviousRights Conference Kicks Off In Geneva
NextChina Looks To The World for Freedom, Say DissidentsNext