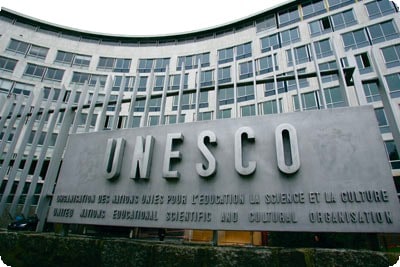 In a highly controversial resolution, the executive board of the United Nations Educational, Scientific and Cultural Organization (UNESCO) voted 33-6 to strongly condemn Israel for alleged violations of Muslim religious freedoms at holy sites in Jerusalem, Bethlehem and Hebron, and for allegedly “planting fake Jewish graves.”
The draft was first adopted by vote on April 12, 2016, in the Executive Board’s Programme and External Relations (PX) Commission (see voting results below).  This text was then ratified without a vote by the Executive Board’s plenary on April 15th. Membership in the two bodies is the same.
What’s in the text?
Adopted under the agenda item on “Occupied Palestine,” the 5-page resolution “strongly condemns” alleged “Israeli aggressions” against “the freedom of worship and Muslims’ access to their Holy Site Al-Aqsa Mosque/Al-Haram Al Sharif.”
The text is divided into the following sections:

What does the resolution say?

Why are the claims problematic?

(i) Israel’s alleged “illegal measures against the freedom of worship”
Contrary to what is said in UNESCO’s decision, Israel guarantees its citizens’ freedom of religion. The Bahá’í faith, whose adherents suffer persecution in many parts of the world (notably in Iran), has its headquarters in Haifa. This is in stark contrast to the situation in neighboring countries. In Lebanon, for example, blasphemy is still punishable by a year’s prison sentence.

In fact, criticism of restrictions on freedom of religion in Israel has focused on curtailments to the religious freedom of Jews — in particular, the interdiction against Jewish worship at the Temple Mount, prayer at which is reserved exclusively for Muslims.

(ii) Failure to acknowledge significance of these sites to Judaism
This is not the first time that UNESCO has courted controversy over its inaccurate rendering of the history of Jerusalem’s holy monuments. But the decision’s distortion of the facts is regrettable not simply for its inaccuracy — more insidiously, it lends an initial plausibility to what are unwarranted criticisms while its bilious tone makes for a hateful and deeply politicized text.
Even the Supreme Muslim Council (Wakf) Guide Book to the Temple Mount of 1925 acknowledged a Jewish connection to the site which is “beyond dispute.” (p. 4, para. 2)
It is especially puzzling that France voted for a resolution which seeks to expurgate the Temple’s historic connection to Judaism when one considers that all over France, including in the Louvre in Paris, hang depictions of Les marchands chassés du Temple (Jesus driving the merchants from the Temple), in which Christ is shown expelling traders from the confines of the Temple.
(iii) Conspiracy Theory: Israel accused of “planting Jewish fake graves”
In a wild conspiracy charge, the resolution chastises “the Occupying Power” for “planting Jewish fake graves” in Muslim cemeteries. The only apparent source for this claim is the Al-Aqsa Foundation for Endowment and Heritage, and some Arab-language social media conspiracy posts.
French Leaders Criticize Own Vote for Resolution