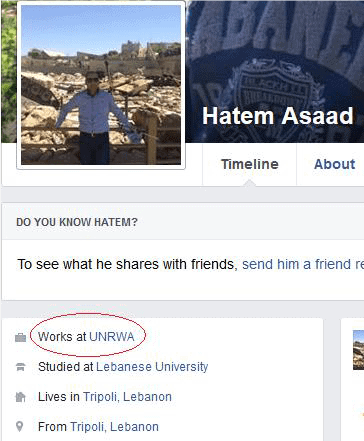 Hatem Asaad identifies himself on his Facebook profile as an UNRWA employee, and can be seen below with his UNRWA pupils. His public Facebook page shows a poster glorifying the faces of two terrorists, Rassan Abu Jamal and Udei Abu Jamal, who killed four Israeli Jews in a Jerusalem synagogue on November 18, 2014.

These posts supporting the murder of Israelis grossly violate the duty of neutrality applicable to all UNRWA employees.