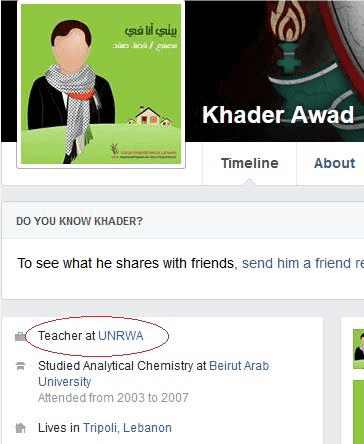 Khader Awad, who identifies himself on his Facebook profile as an UNRWA teacher, features on his public Facebook page an image of a Jew with three guns and a knife trained on his head; the Hebrew caption reads “Blood = Blood. #KillThem.” In Arabic, it says “Kill the settlers.”

A second photo, which Mr. Awad made as his cover photo, shows a Hamas terrorist in front of a scene of destruction in Israel, with the words in Hebrew and Arabic “We are waiting.”

These posts supporting the murder of Jews and Hamas terrorism grossly violate the duty of neutrality applicable to all UNRWA employees.