Head of WHO Inquiry Into Coronavirus Response Has Close Ties to Beijing, Should Step Down

GENEVA, November 10, 2020 — As 194 countries gather online for the World Health Organization’s annual assembly, which is slated this afternoon to hear the first progress report from its international inquiry into the origins and global response to the coronavirus pandemic, an independent human rights watchdog is calling on the panel’s co-chair, former New Zealand prime minister Helen Clark, to recuse herself from the position on account of her numerous prior statements praising the WHO’s response, and due to her close ties with the Chinese government.

Clark was appointed by the world’s top health agency to co-chair the Independent Panel for Pandemic Preparedness and Response, an impartial inquiry that will probe the WHO’s handling of the coronavirus and the response of governments around the world. The panel is scheduled to present its progress report today, and the final report in May 2021.

However, according to Hillel Neuer, executive director of the Geneva-based NGO UN Watch, “Clark’s numerous statements this year praising the WHO for the very actions she is meant to investigate, as well as her history of close ties with Beijing—which backed her recent bid to become UN chief—give rise to the appearance of bias, and could seriously undermine the credibility of the panel’s findings.”

“That is why we have written Ms. Clark a formal letter today, documenting the problematic statements, and urging her to step down from her role as co-chair of the inquiry.” See full letter below.

“The WHO’s selection of Helen Clark for the coronavirus inquiry gives rise to legitimate concerns that both China and the WHO will get a free pass from an investigation whose findings could be essential to protecting global public health,” said Neuer.

UN Watch’s appeal to Clark comes after a recent New York Times report on the WHO’s deference to China and praise for Beijing throughout the course of the pandemic.

The WHO schedule shows the brief progress report (A73/INF./4) will be presented this afternoon under Agenda Item 13.2, which deals with the WHO’s work in health emergencies. 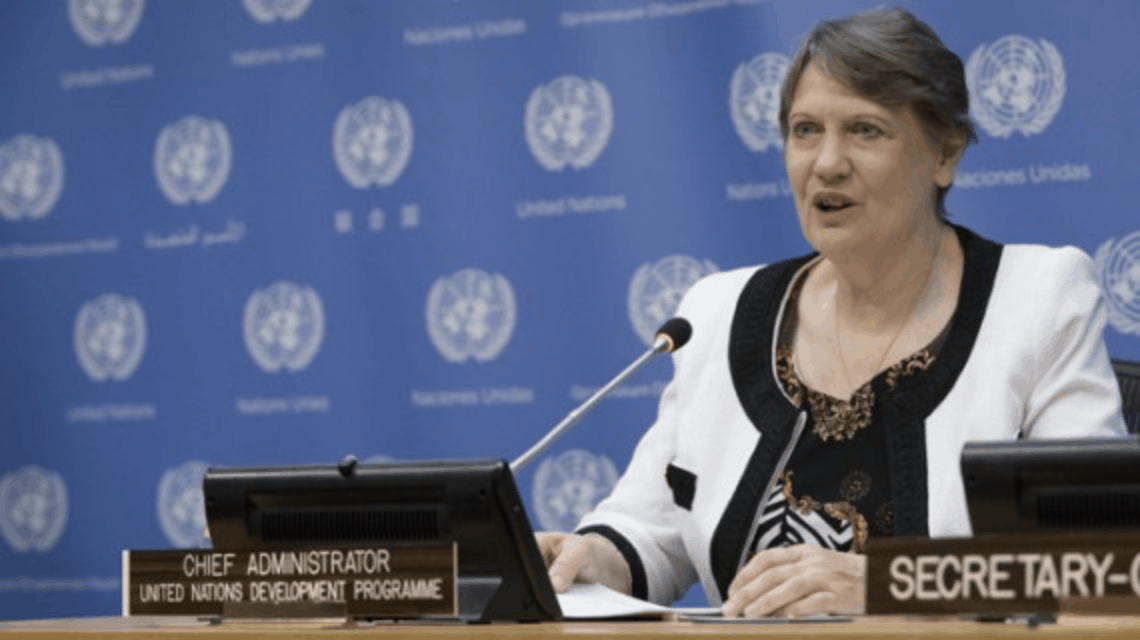 Letter from UN Watch to Helen Clark, Co-Chair of the
WHO International Probe into the COVID-19 Pandemic

UN Watch respectfully requests that you recuse yourself as co-chair of the WHO inquiry into the origin of and global response to the coronavirus pandemic. Though WHO chief Dr. Tedros has lauded you as an independent leader who is singularly qualified to head this investigation, your extensive record of partisan statements defending the WHO as well as your close ties with the Chinese government give rise to the appearance of bias which, under international law, are grounds for recusal.

Concerning the WHO, you have made sweeping claims defending the agency and its handling of the coronavirus. In April, for example, you tweeted an article sympathetic to the WHO’s response to the pandemic since it was notified of the Wuhan outbreak, adding that the “WHO has been in battle mode,” that “the Agency needs support, not brickbats,” and defending the WHO’s response on grounds that it was “guided by rules [the] USA helped write.”

Just last week, in a Bloomberg News interview, when asked if it was wrong for the WHO to gushingly praise China’s response to the outbreak, you evaded the question, saying, “it’s very difficult to criticize any member state.”

In June, you again defended the WHO, despite its failure to swiftly label COVID-19 a “pandemic,” and instead you put the onus on countries for not acting sooner.

Furthermore, in a July radio interview with Newstalk ZB, you said “the WHO has never advocated travel bans” during the pandemic, which is false. Dr. Tedros tweeted in January that the agency opposed travel restrictions.

Concerning China, in 2016 you were described as “a good friend” of the Beijing regime when President Xi Jinping pledged to support your bid for the position of UN Secretary-General.

Months later, as head of the UN Development Program, you supported China’s Belt and Road Initiative, praising the country’s “historic transformation” and contributions to global and social development—even though the $1 trillion-dollar infrastructure and investments scheme has fueled Beijing’s persecution of the Uighurs, many of whom live in a region at the heart of the network.

Also of concern is your close ties with Chinese state propagandist James Chau, a WHO ‘Goodwill Ambassador’ who, according to a complaint by 100 non-governmental organizations, has systematically abused his UN position to whitewash Beijing’s role in the virus outbreak.

In April you appeared on Chau’s program “The China Current,” which is funded by a top Beijing official tied to the Chinese Communist Party apparatus.

In that interview, you implied that China should be considered a model country for the world in its response to the outbreak.

You also criticized the “flat-footed response” of the international community, and hastened to add, “Let’s except from that the World Health Organization,” which “has really tried to give global leadership.”

Even more, when asked in July if the WHO panel would investigate China’s influence over the WHO, you refused to answer. And, despite reports verifying that China withheld information from the WHO, you gave Beijing a pass on its initial response to the virus.

When it comes to your ability to scrutinize the actions of China, your record of supporting other communist dictatorships is an additional concern. For example, you praised Cuba’s Castro regime for sending doctors abroad to fight the coronavirus, even after a November 2019 UN report found that Cuban medics suffered severe human rights abuses and treatment that was tantamount “to a modern-day form of slavery.” The report said Cuban doctors are significantly overworked, receive only two-thirds of monthly wages while the rest is handed over to the regime, and fear threats of reprisals and imprisonment for those who fail to complete a mission abroad. You also paid tribute to Cuba’s dictator Fidel Castro, who systematically violated human rights and attacked UN human rights experts who criticized his regime.

The coronavirus pandemic has seriously impacted the lives of virtually everyone in the world. Assessing the origins, spread, and response to the outbreak is essential for the future of humanity.

Regrettably, as shown above, your numerous partisan statements defending the WHO’s response to the pandemic disqualify you from objectively investigating this question. Your close ties to the Chinese government likewise pose a conflict of interest and create the appearance of bias that undermines your ability to impartially investigate the role of China, where the coronavirus began.

Accordingly, to ensure the credibility and effectiveness of this consequential international inquiry, we respectfully urge you to recuse yourself from your role as co-chair.