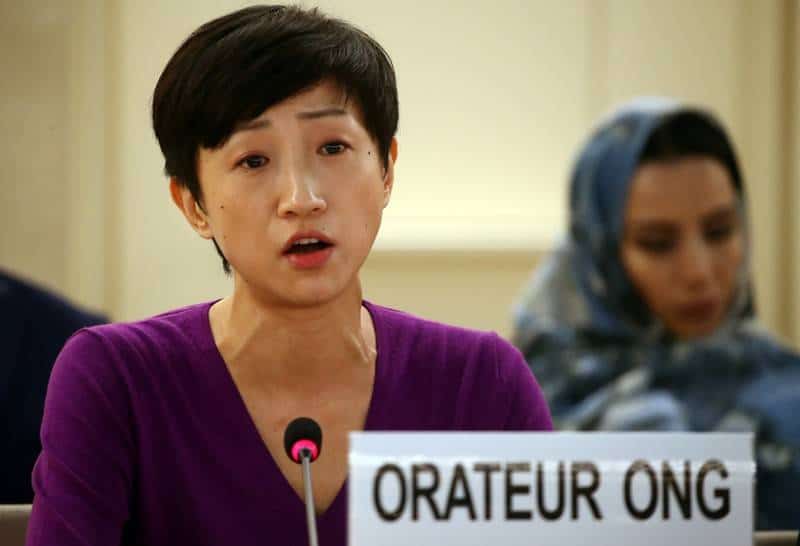 Although he allowed her to complete the speech, the HRC Vice President, Argentina’s Carlos Mario Foradori, appealed to Ms. Chan to “frame the statement within the context of the agenda item, strictly.”

In response to questions from CNS news about the rebuke, HRC spokesman Rolando Gomez justified the objection on grounds that Ms. Chan’s speech addressed a particular country situation in an Item 3 debate rather than focusing on a thematic issue.

Gomez said: “Essentially, statements during agenda item 3 should address thematic issues and should refrain from citing specific country situations. Had the statement been delivered during general debate item 4, the president/vice president would not have had to made that comment.”

Agenda Item 3 is titled “Promotion and protection of all human rights, civil, political, economic, social and cultural rights, including the right to development.”

“This is yet another example of selectivity and double standards at the Human Rights Council. Agenda Item 3 is routinely used to address specific country situations, including by China, which was the subject of Ms. Chan’s speech. Regrettably, instead of serving as a forum for human rights activists to speak out freely against abuses by their governments, the Human Rights Council too often has become a vehicle for dictatorships to harass dissidents and silence criticism,” said Hillel Neuer, Executive Director of UN Watch, the UN-accredited NGO which hosted Ms. Chan’s speech.

In fact, during the same Item 3 debate, many other speakers addressed specific country situations without being reprimanded by Ambassador Foradori. For example:

Likewise, in the March 2019 session, The Netherlands spoke under Item 3 about violations of civil liberties by Nicaragua, Zimbabwe, Sudan and Cuba, and different NGOs addressed human rights violations by Algeria, Brazil, Sudan, Malaysia, Saudi Arabia, Pakistan, Bahrain and others. Examples of this can be found in the Item 3 debates in every session of the Human Rights Council.

Furthermore, this past summer, 50 states submitted a joint letter to the Human Rights Council — under Agenda Item 3 — praising China’s record on human rights, particularly in regard to Uighur Muslims in Xinjiang.

“We call on Human Rights Council President Coly Seck to ensure that procedural rules for Council debates are not applied selectively to chill criticism against powerful countries like China, while at the same time allowing China to defend its record on human rights.”

No joke: U.N. Human Rights Council rebukes #HongKong MP for speaking outside the "context of the agenda item" after she tells of police brutality against pro-democracy protesters, under the UNHRC's Agenda Item #3 on "Promotion & protection of all human rights, civil & political." pic.twitter.com/yFiSAxKDbB