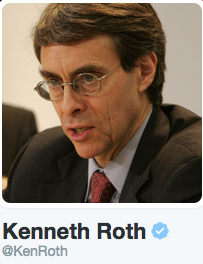 While Human Rights Watch director Ken Roth has emerged this week as the most prominent backer of the PLO’s controversial new bid to join the International Criminal Court in order to launch criminal complaints against Israel, it was not so long ago that Roth’s organization promised Americans that precisely this scenario would never happen.

The flip-flop seriously undermines Roth’s credibility on the subject of the ICC, and will only strengthen the cause of the court’s skeptics in the United States.

In a flurry of tweets over the past few days, Roth has sharply criticized statements of the U.S., France, and Canada that described the PLO’s ICC gambit as unilateral, counter-productive and provocative.

US sees settlement growth as obstacle to peace http://t.co/lqQSgVy50R but denounces Palestine joining ICC to stop it. http://t.co/OVnVrLLzzd

So France, an ICC member, accepts Palestine as a state but not its right to join the ICC and try to deter war crimes. http://t.co/859Uz9Mb6Y

In Canada's principled view, it's OK for it to join the ICC & negotiate but not for Palestine. That is "provocative." http://t.co/l60M8TOmjl

Roth has also called out the New York Times and the Washington Post for alleged errors of fact and law in their news and opinion articles on the subject.

NY Times Is wrong: #Israel’s settlements are war crimes based on territory occupied at time, not future boundaries. http://t.co/Y2WDQt7cD3

Flip-Flop: HRW in 2001 Promised That PLO Politicization of ICC Would “Never Happen”

What is so interesting about all of this is that back in 2001 — when Americans were debating whether or not to join and support the ICC — Ken Roth’s Human Rights Watch launched a campaign to assure the public that the ICC would never be used to pursue what it described as “politically motivated cases against Israel.”

As part of HRW’s publicity campaign to sell Americans on ICC, Roth’s group published “Myths and Facts About the International Criminal Court.”

The concern about PLO politicization of the ICC was nothing but a “myth,” said Human Rights Watch:

And one of the reasons it wouldn’t happen, said HRW, was because of these alleged facts:  “Future actions on Israeli or Palestinian territory will be covered only if the ICC treaty is ratified by Israel or by a broadly recognized Palestinian state.” And as HRW staff assured Americans in a Washington Post op-ed, “That will not happen until after a peace agreement, in which case the likelihood of Israeli military action against Palestinians greatly diminishes.”

Fast forward 14 years. HRW’s Ken Roth is now furiously lobbying for the Palestinian bid to join the ICC before a peace agreement — and indeed while the PA refuses to even sit at the negotiating table with Israel.

So what happened to Roth’s “that will not happen” promise?