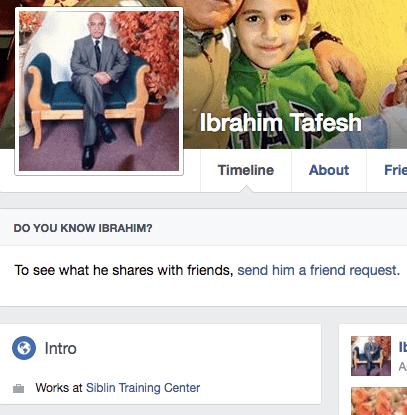 Ibrahim Tafesh lists himself as an employee of UNRWA’s Siblin Training Center. He is a regular poster of antisemitic and Hamas content.

Image 1, for instance reads “Raise the Palestinian Kefiyah, raise and wave it, grab a Zionist’s beard and sweep with it”.

Tafesh has also shared Image 2, a picture of a Palestinian boy holding up three fingers towards Israeli soldiers, a symbol that is widely recognized as a celebration of the three Jewish boys that Hamas operatives kidnapped and murdered in June 2014. He has also shared a Hamas propaganda video showing an Israeli soldier being killed by a sniper, a screenshot of which can be seen as Image 3.

Tafesh has also called the Holocaust “alleged and overrated”, as seen in Image 4. Of note, UNRWA schools do not include an Holocaust education in their curriculum.