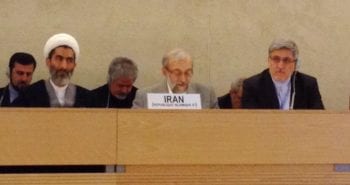 Iran’s representative just told the UN Human Rights Council that the West and its “media blitz” and “propaganda” is the real one to blame for its execution on Saturday of 26-year-old Reyhaneh Jabbari.

One issue was about a  recent execution. Let me explain. Reyhaneh Jabbari had numerous judges, numerous lawyers. The lawyers defended her. Court came back with an indictment that it was first degree murder with intention, with capital punishment.

It is considered Qesas, the right of the victim. The judiciary not in position to execute. We tried and lobbied a lot to solicit forgiveness from relatives of victims. We unfortunately were not able. One reason was because of huge propaganda created in this case. In my last meeting with sons, I urged him to “let not even others also not lose a beloved one; forgive.”

He replied: “We had the intention to forgive, but because of the media blitz — they accused our father of forced rape — we cannot deal with this humiliation.”

So this execution went ahead. We’re very sorry that two nationals lost their life. Western countries should look into it. This idea of  “the West and the rest, only the west has good things,” this is wrong. Please accept the idea that others have a good way of life. Westrn lifestyle isn’t only way of doing things.