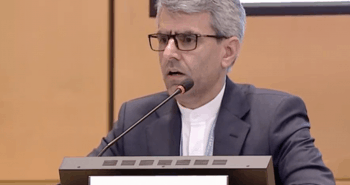 GENEVA, March 12, 2020 — The UN Human Rights Council today adopted a report replete with praise for the Islamic Republic of Iran, a serial abuser of human rights, in wake of a mandatory human rights review that all UN member states undergo every five years. (See quotes at bottom.)

Ahead of the review, UN Watch refuted key claims in Iran’s submission to the UN plenary.

While the review is meant to scrutinize governments and thereby strengthen the basic rights and freedoms of their citizens, according to a UN Watch count, 95 out of 111 countries, or 85%, praised Iran for its human rights achievements.

1/ Today, in one of its last acts before suspending due to the coronavirus, @UN_HRC adopted a report with 85% PRAISE for the human rights record of #Iran.

This includes 49 countries that glowingly praised the theocratic regime, and another 46 that expressed some praise for Iran’s alleged achievements.

Only a small minority of 16 nations used their brief speaking time to apply real scrutiny to Tehran’s human rights record.

“Cynical politics have hijacked this council, giving a free pass to a regime that subjugates women, tortures human rights dissidents, executes gays and spreads hatred, war and terror across the region, including aiding and abetting mass atrocities in Syria.”

1. Quotes from yesterday’s debate ahead of the UN adopting its report on Iran:

China: “We commend Iran’s efforts to eradicate poverty, enhance social security, protect the rights of vulnerable groups & hopes Iran will continue to drive economic & social development to provide a solid basis for the enjoyment of all human rights.” Video

Venezuela: “We welcome the answers provided by the government [of Iran] during the review in which it confirmed the country’s steadfast commitment to protecting human rights.” Video

• “While Iran is struggling to contain the coronavirus pandemic and to protect not only our own citizens but also the whole humanity against this scourge, Iran’s health capacity is viciously targeted by the United States with unilateral sanctions.” Video

• “The pathological addiction to radical unilateralism of all sorts, including unilateral coercive measures [sanctions], plus the unbridled resort to military force, have turned human rights into a main casualty of today’s international relations.” Video

• “Under the U.S. economic sanctions, the right to health is the prime casualty of those sanctions. The whole population’s basic human rights are being targeted by a systematic and brutal manner by the United States’ sanctions.” Video

• “For years, a number of developing countries—Iran being one of them—are scapegoated for human rights violations while, in fact, human rights are only being abusively invoked as a tool to stigmatize and antagonize targeted nations.” Video

• “Torture and ill-treatment in Iran are forbidden under the Constitution and Islamic teachings and values. It is also forbidden based on national criminal law and international commitments.” Video

• “After the Revolution, women have been pioneers. The Islamic Republic of Iran is determined to continue its efforts to strengthen women’s rights in law and in practice.” Video

• “Civil rights including freedom of expression, access to information, freedom of assembly, freedom of association as well as political and social participation, have provided a good atmosphere for journalists, reporters, media and NGOs.” Video

• “All citizens are equally protected by the law. The rights of religious minorities and [people] of any social and political orientation are enshrined in the charter as citizen’s rights and the government is required to observe it.” Video

2. Recommendations from the UN report falsely implying that Iran is serious about respecting human rights:

• Syria called on Iran to “continue efforts to confront the negative impacts of unilateral
coercive measures on the human rights of the Iranian people in order for them
to overcome the obstacles resulting from such measures.”

• China called on Iran to “continue to hold bilateral human rights dialogues with other countries.”

• North Korea called on Iran to “continue its efforts for the protection of vulnerable groups affected
by economic sanctions and unilateral coercive measures.”

• Cuba called on Iran to “continue strengthening its initiatives on human rights education.”

• Kuwait called on Iran to “continue its efforts to provide the necessary financial resources for
the development of human rights and citizenship rights education.”

3. False statements from the November 2019 review session, as summarized in the report adopted today:

North Korea: “We highly commend Iran for its effort and continue to protect HR for it people particularly children and people with disability.”

Qatar: “My delegation commends the legislative and executive development made by Iran to ensure the development of social and human rights.”

Belarus: “We highly appreciate these results (the progress of Iran), knowing at the same time that the country is forced to overcome the difficulties associated with the application of illegal unilateral coercive measures against it.”

State of Palestine: “We commend Iran’s commitment to promote and protect human rights.”

Malaysia: “Iran’s effort to improve the livelihood of it people is commendable.”

Indonesia: “We commend the progress made by Iran in the development of human rights.”

Iraq: “We recommend that Iran continue efforts to implement the provisions of the International Covenant on Economic, Social and Cultural Rights”.

Haiti: “We recognize Iran’s effort to improve living conditions for people living in the country despite sanctions applied to it”.

Oman: “We commend Iran in the field of human rights protection and promotion.”