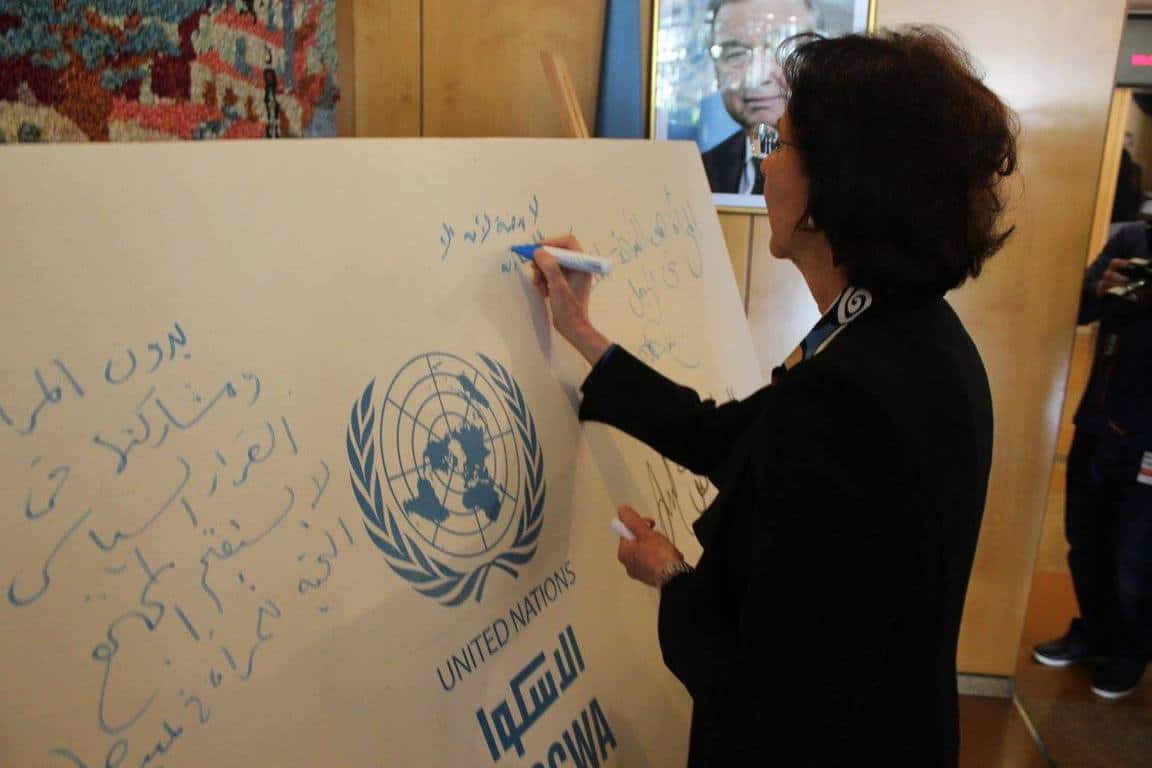 Then ESCWA chief Rima Khalaf kicked off 2017 International Women’s Day in Beirut beneath photo of
UN Secretary-General Antonio Guterres, whose remarks were read out at the opening.

“At 10 o’clock on a rainy night, an officer of the Israeli occupying forces knocked on the door of Wisal, Um Nabil, in the village of Deir Ghassaneh in northern Ramallah. He ordered her to surrender her two sons whom he had come to arrest, adding: ‘Dress them warmly in this cold, you won’t see them again.’”

“Wisal answered: ‘I will see them again. They will grow up. They will get married and they will have children. But you won’t see the end of the year.’ This event took place in 1982. Today, Wisal recounts the story surrounded by her children and grandchildren. The officer’s fate is unknown.” 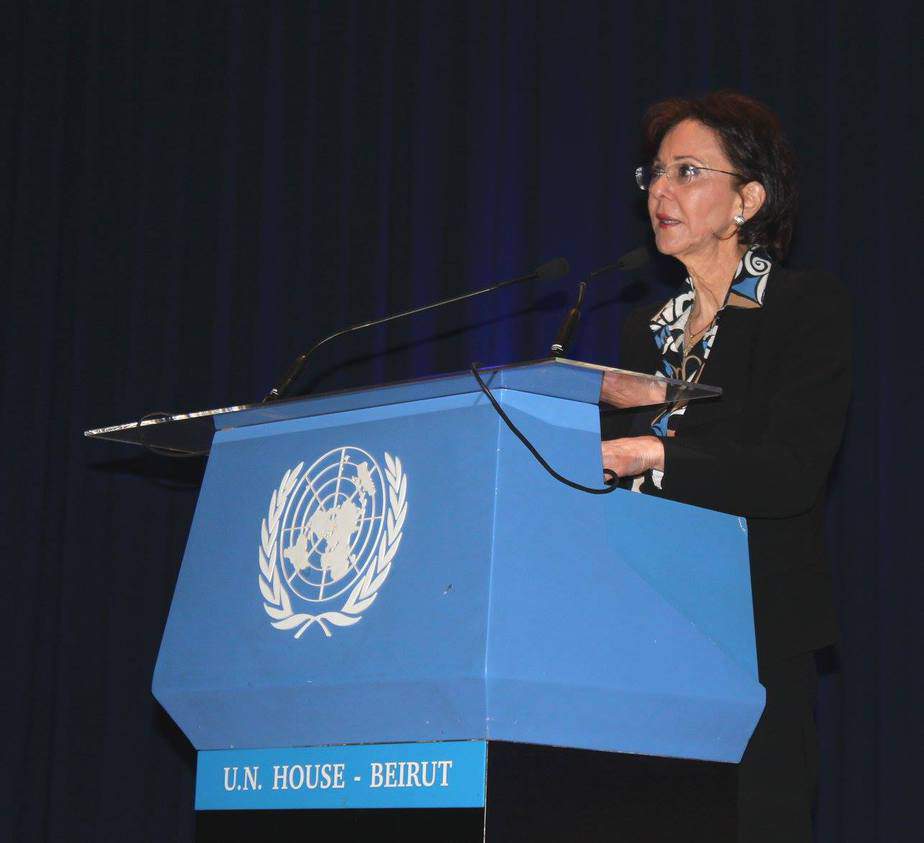 “His Excellency Affairs Jean Oghassapian, Minister of State for Women s Affairs in Lebanon; Eminent artist Ms. El-Roumy; Your Excellencies; Colleagues; Distinguished audience: With this story emboying the solidity of our women even in calamities, I begin International Women’s Day. And my address to you today is the last from this rostrum.”

“Those engaged in official duties in our region, like me and many of you, know that they enjoy greater freedom when distanced from officialdom; and when liberated from censorship, self-imposed not out of fear but to protect their colleagues and institutions. Such liberation gives rise to freedom of choice, and I, like Wisal and many others, choose hope. I choose hope in spite of the brutish injustice in our region, or maybe because of it.”

“Today, in the Arab region, countries are collapsing under the pressure of ongoing conflicts, while others perceived as stable are on the brink of cracking from latent conflicts of equal ferocity. Millions have fallen victim. Children are being dragged from classrooms and thrown into battlefields. Women’s lives are being defiled. People are forced to choose between being sold in slave markets or being executed in prison; between being starved to death in jail or killed by barrel bombs, guided missiles, or armed vehicles while protesting in squares.” 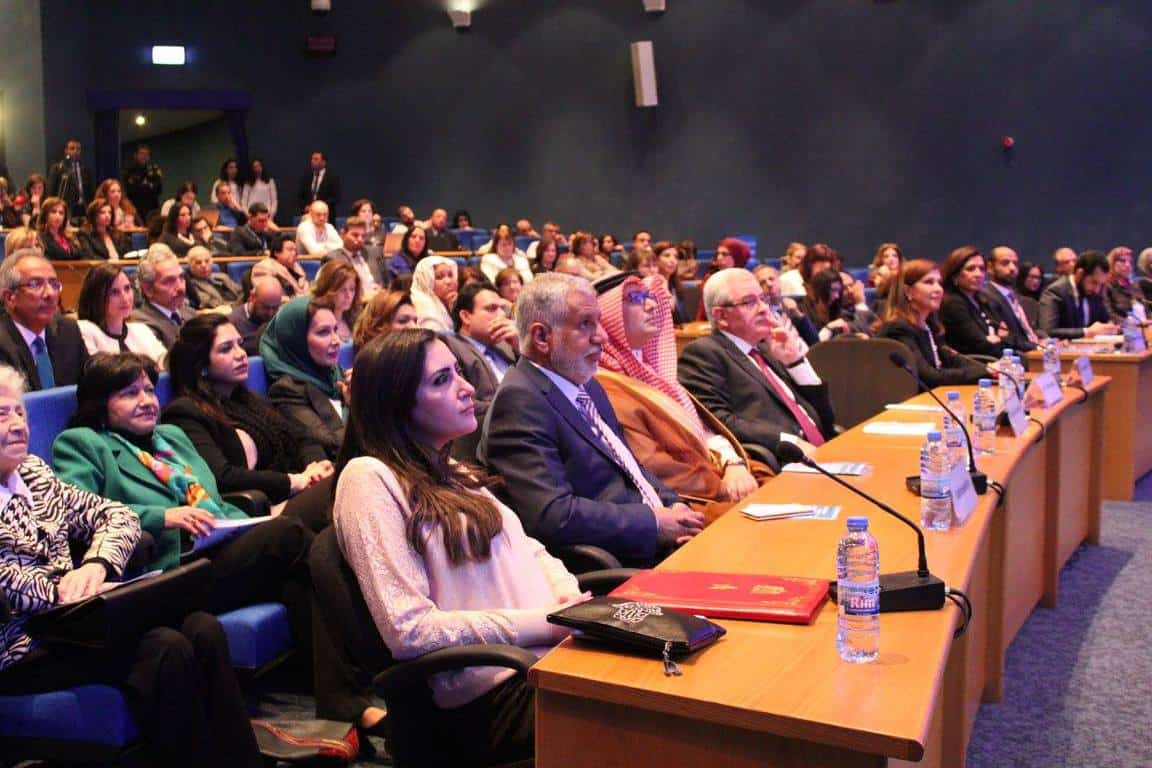 “In conflict-affected countries, such as Iraq, Libya, Syria and Yemen, women suffer from carnage, destruction, displacement, human trafficking and other injustices plaguing their societies. They also bear the brunt of the oppression inflicted upon them by their communities, depriving them from the essence of life and requiring them to fight for survival in this arduous corner of the world. Men depart to trade death among themselves, leaving the women to nurse wounds, raise and educate children, and make a temporary living on a transient land, between bombings in a demolished house or between displacements in a makeshift tent.”
“In Palestine, in comparison, the injustice suffered by the population is unique. They [Palestinians] were evicted from their country and denied their right to even the most partial self-determination. Today, their houses and land are seized to build settlements for outsiders from overseas. They [Palestinians] are subjected to military rule, extended administrative detention and extrajudicial executions. Those [Palestinians] who have survived all this are suffering under a system of racial segregation that punishes them because of their racial origin, their language and their religion, and that grants occupying forces the power to allocate their share of land and sky.”

“Some people will say that this is not the right time to talk about women’s rights, while nations are in danger. They will tell us that a little bit of torture or killing innocent people or starving them is not a crime because this benefits the majority’s will and the stability of the country.”

“They will urge us to accept Israel as a Jewish state which is discriminating against people based on their religion because this is dictated by the balance of power. But I am saying to you, that those voices will disappear gradually and will drag the owners of those voices to destruction.”

“The acceptance of Israel as a religious state, in which it is enough to be a Jew in order to be a citizen, is a subject to a flagrant violation of the principle of equality. It will not bring peace and security, as stated, but will threaten the regional political system as a whole, and generates streams of calls for redrawing borders on the basis of religion.”

“A regional solution which is promoted by pressing regional parties to compromise on the rights of the Palestinians and the Arabs, and even the general human right to equality and non-discrimination, will not only lead to a second Nakba, but one that may be more daunting and more far-reaching than the first. It will not give legitimacy to the Israeli Apartheid regime, but would delegitimize those complicit with regional parties.”

“We have seen millions of young people in our streets, half of whom were women… whose only weapon against batons and tanks was tenacious hope. They told their oppressors, both those who forged and imposed their restraints: We shall see our children. They will grow up, get married and have children. We shall see our women empowered, building alongside men prosperous nations resilient to any attempts against life.”

UN summary: “Khalaf addressed an audience of politicians, diplomats, intellectuals and experts on human and women’s rights. Keynote addresses for the occasion were also delivered by Lebanese State Minister for Women’s Affairs Jean Oghassapian and Lebanese Diva Majida El-Roumy, while ESCWA Deputy Executive Secretary Khawla Mattar read out the message of United Nations Secretary-General General António Guterres. The commemoration, which was presented by renowned Lebanese actress Takla Chamoun, was also marked by artistic performances by singer Umaima Al-Khalil, accompanied on the piano by musician Hani Siblini, and theatre writer and performer Raeda Taha who presented scenes directed by Lina Abyad.  Side events during the day included a roundtable in cooperation with UN Women, a handicrafts trade fair, an artwork exhibition by Katia Traboulsi in cooperation with Saleh Barakat Gallery, a movie screening entitled “6,7,8” and a tribute canvas.” 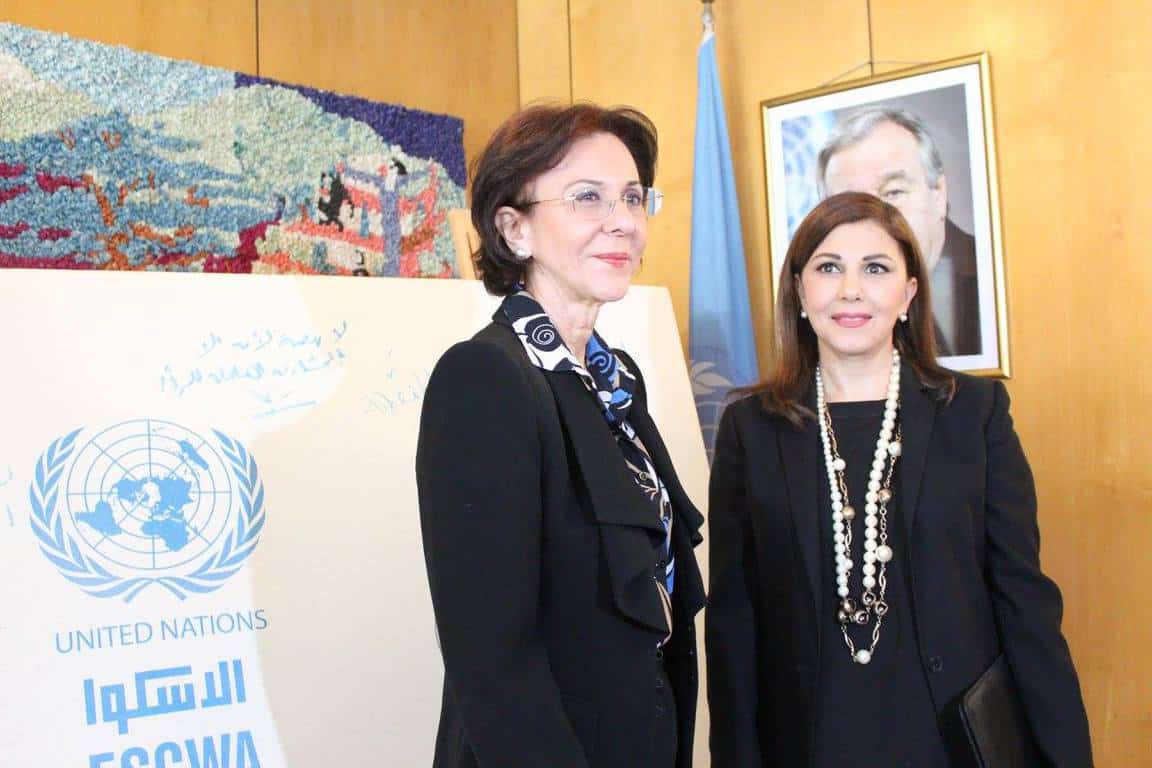 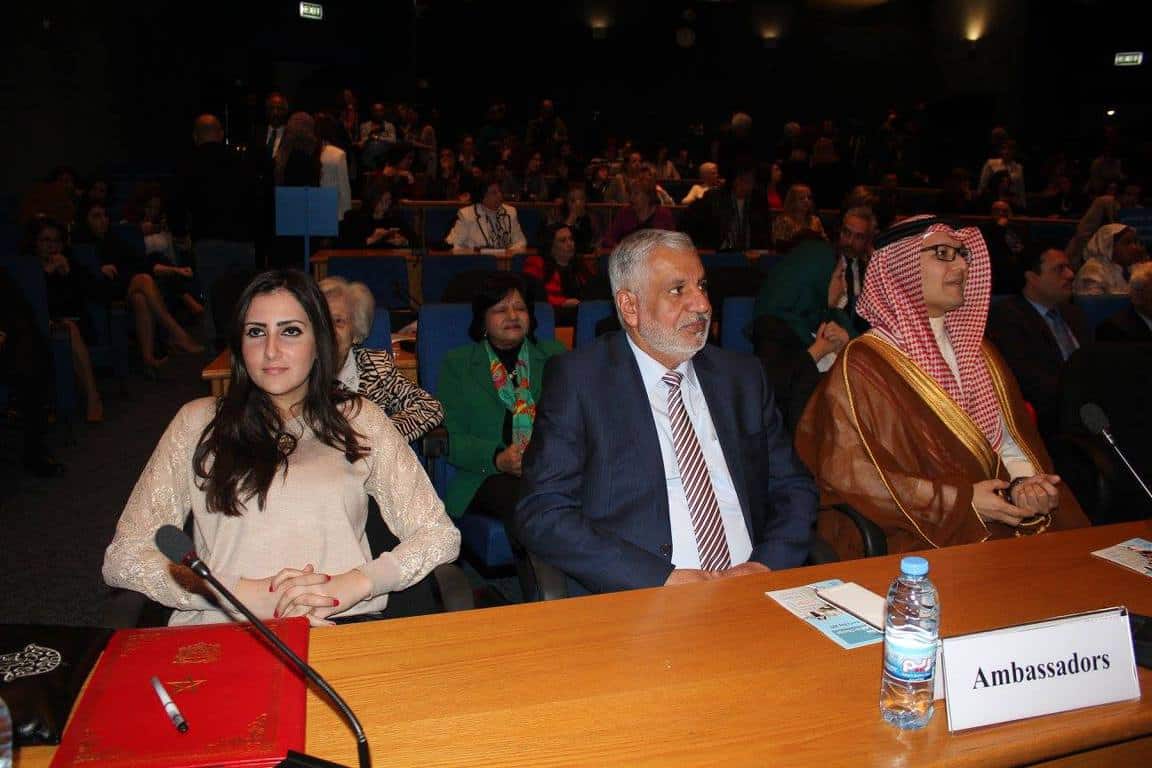 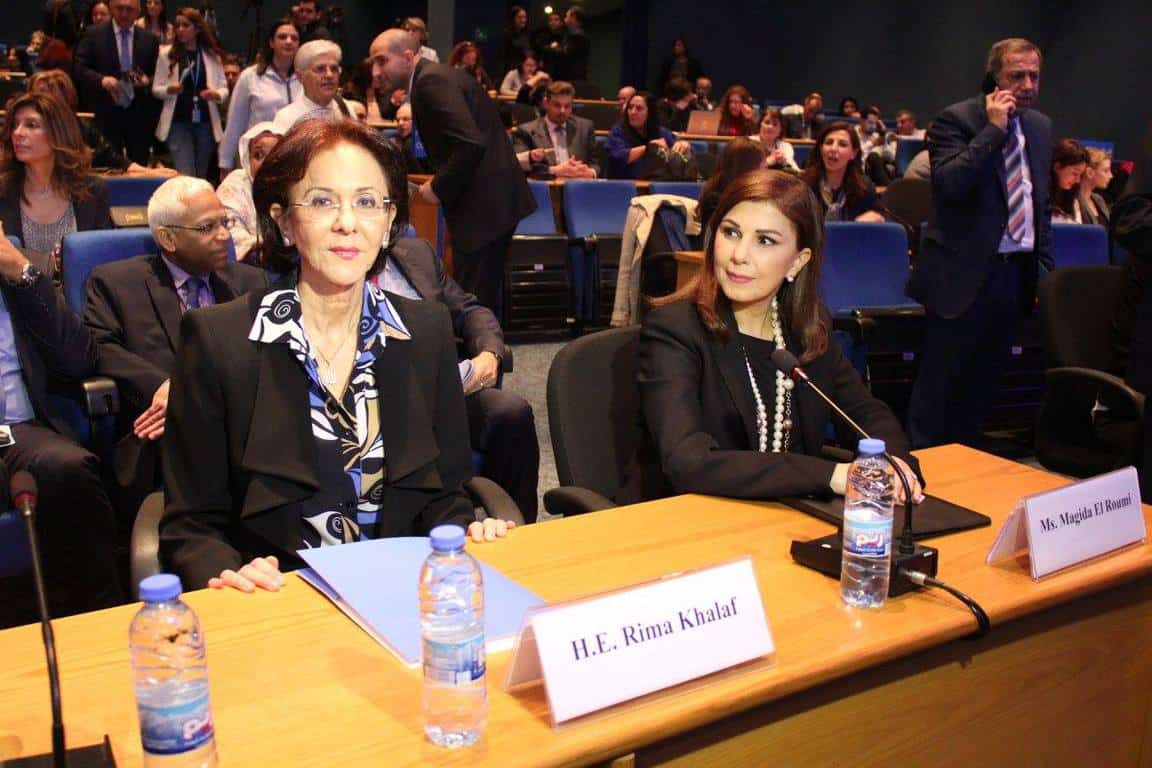 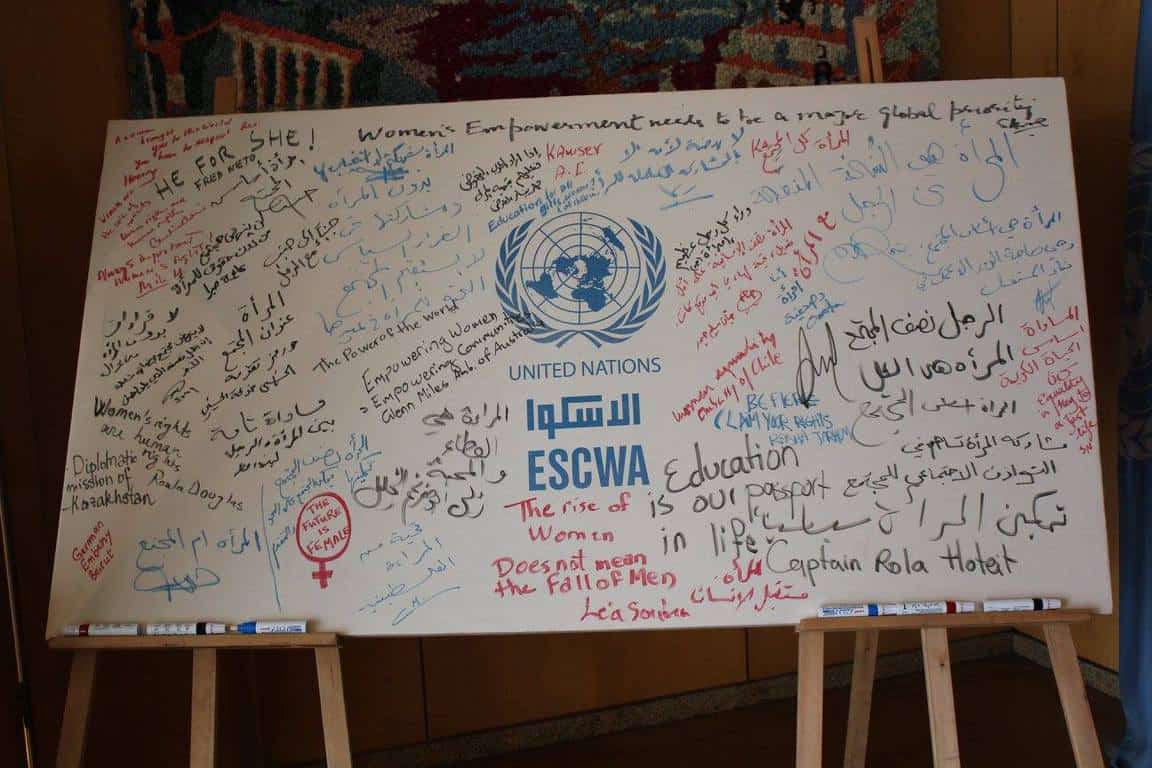