After Zimbabwe was accused yesterday of rights abuses by an international coalition of non-governmental organizations (NGOs) led by UN Watch, the Mugabe government’s Geneva representative lashed out at the groups in a speech that urged a U.N. human rights body to “dismiss with contempt” the request for its intervention. 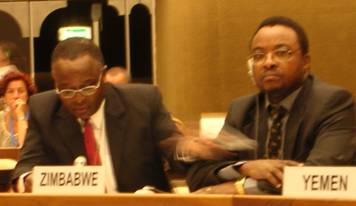 Ambassador Chipaziwa (left) responds to UN Watch today at the U.N.
Sub-Commission on the Promotion and Protection of Human Rights.
Commenting on the more than half a million people made homeless by President Robert Mugabe’s demolition campaign, Ambassador Chipaziwa said they had lived in “erstwhile slums,” where “Government detractors had plotted and carried out illegal currency trades in efforts to destroy the country’s economy.”  Apparently referring to the NGOs, he added that Zimbabwe “does not deserve the ugly attention which her detractors try to conjure up,” and would “never yield to their evil designs.”  (For full text click here.)

In a joint NGO statement that was delivered Tuesday before the U.N.’s Sub-Commission on the Promotion and Protection of Human Rights—a body of independent experts that belongs to the Human Rights Commission and meets annually—16 organizations, including UN Watch, Freedom House and Hope for Africa International, urged the assembly to speak out against Mugabe’s policies of land seizures, mass home demolitions and torture.  (The full text of the Joint NGO Statement appears at bottom.)

This was the first time that the Mugabe government was made to answer before an international human rights forum for its recent demolition of homes.  According to special U.N. envoy Anna Kajumulo Tibaijuka, approximately 2.4 million Zimbabweans have been affected—in their basic shelter, access to drinking water, sanitation and treatment for AIDS.  Ignoring the U.N.’s report, Zimbabwe today said that “the recent clean-up of the illegal slum dwellings in our towns and cities has resulted in reduced crime and handsome settlements.”

Zimbabwe’s U.N. speech made several related references to “the enemies of the Zimbabwe government,” who it claimed were conspiring to harm Zimbabwe.

The Mugabe government’s alarming resort to the imagery of enemies, conspiracies and “evil designs” reflects the sharply growing insecurity of a tottering dictatorship whose only strategy for survival seems to be the fostering of fear from external scapegoats.

What ought to be most troubling of all, is that Mugabe’s shockingly cruel demolitions began less than a month after the U.N. in April inexcusably voted to reelect his famine-causing government to another term on the Human Rights Commission—a move evidently interpreted by Harare as carte blanche for further abuses.

The human rights catastrophe in Zimbabwe underscores the critical need to ensure that the upcoming U.N. reform summit in September endorses Kofi Annan’s call to prevent human rights abusers from obtaining membership on the Commission, which they use to frustrate its true purpose.

Whether the Sub-Commission, now half-way through its annual 3-week session, will indeed speak out on the abuses in Zimbabwe is far from clear.

U.N. rules allow it to tackle violations that have not already been dealt with by the Human Rights Commission, or urgent matters involving serious violations.  Because the recent annual meeting of the Commission failed to adopt any resolution on Harare’s abuses, and due to what the U.N. says is severe suffering by an estimated 700,000 newly homeless people, we believe the Sub-Commission is legally obliged to act.

Unfortunately, the Sub-Commission has not always been, shall we say, at the vanguard of human rights protection.  With Saddam Hussein grilled last week by Iraqi investigators for complicity in war crimes against his own citizens, it is worth recalling the Sub-Commission events of September 1, 1988, when a measure was introduced to censure the dictator for gassing the Kurds of Halabja.  Expert Halima Warzazi of Morocco jumped in and sprung a “no action” motion, successfully killing the resolution. Her move was supported by Alfonso Martinez of Cuba.  Nearly 20 years later, both are still members on the panel with all that portends for any hope of action on behalf of Mugabe’s victims.

Still and all, our appeal to the Sub-Commission was not in vain.  For the first time since the appalling home demolitions, Zimbabwe was made to answer for its crimes before an international human rights forum, proving the regime’s vulnerability to international pressure.  With reports now that South Africa has decided to hand Mugabe an unconditional economic bail-out, the international community is hardly rising to the occasion.

Following is the Joint NGO Statement on the Zimbabwe Crisis.

ITEM 3:  ADMINISTRATION OF JUSTICE,
RULE OF LAW AND DEMOCRACY 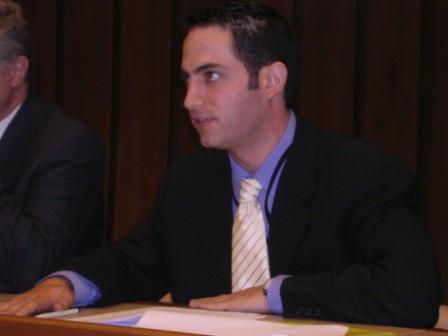 (To see a RealPlayer video of the remarks, please click here.)

My name is Michael Inlander, and I am a Richard and Rhoda Goldman Fellow at UN Watch.  I am delivering the following Joint NGO Statement today on behalf of an international coalition of non-governmental organizations and human rights activists, reflecting a significant and diverse cross-section of civil society.

The values of democracy, justice and the rule of law are the organizing principles of any rights-based society.  Disregard for these principles is, by definition, a violation of civil and political rights.

What must be equally appreciated, however, is that an assault on civil and political rights often leads to an assault on economic and social rights.  A government that denies its people democracy ends up denying them development.  As Amartya Sen famously observed, “no democracy with a free press ever has experienced a major famine.”

Nowhere is this more evident today than in Zimbabwe.  Over the past five years, under the regime of President Robert Mugabe, this great nation went from being the breadbasket of Africa to an economic and social basket case.

How this came to be provides a case study into the ruinous effects of a government’s violation of the rule of law and democracy.  We would like to discuss in particular the violations of (1) land grabs; (2) mass evictions and home demolitions; and (3) torture.

The situation in Zimbabwe qualifies under both categories.  First, to our great disappointment, the 61st Session of the Commission failed to deal with the situation of Zimbabwe.

In previous years, the Commission saw draft resolutions introduced to condemn the Mugabe regime’s violations.  True, these were invariably defeated by abuse of the “No Action Motion” procedure.  Nevertheless, the annual attention surrounding each draft resolution shined an international spotlight on the violations, and gave voice to Zimbabwe’s victims.  We regret that, this year, the traditional state sponsors of this resolution apparently decided that Zimbabwe’s violations—and Zimbabwe’s victims—were not a priority.

Second, as detailed below, the gross and systematic violations in Zimbabwe constitute an urgent crisis of staggering humanitarian proportions.

Five years ago, President Mugabe initiated an extensive land-grab campaign, seizing over 10 million acres of land, mostly from white farmers.  Whatever the evils of colonialism and its legacy, the effect of Mugabe’s actions for Zimbabwe’s people has been famine and a ruined economy.

Zimbabwe has been turned into a major recipient of food aid.  Last year, the output of maize failed even to meet national demand, and equaled about half the amount produced in the year before the land seizures began.  Since then, the Zimbabwe economy has contracted by nearly 35%, with inflation last year reaching as high as 600%.  Today, approximately 80 percent of the work force is unemployed and 4 million of Zimbabwe’s 16 million people have emigrated.

It was not thought possible, but in the past few months, life in Zimbabwe has become even worse—much worse.  Beginning on May 19, the government began a campaign it calls Murambatsvina, or “Operation Drive Out Trash,” which—under the pretense of urban clean-up—has destroyed the homes and livelihoods of approximately 700,000 women, men and children.

Mrs. Anna Kajumulo Tibaijuka, head of the special U.N. Mission to Zimbabwe, has just released a report showing that a further 2.4 million people have been affected in varying degrees, such as in their access to food, water, health care and sanitation.  Pearson Mbalekwa, a former member of the ruling party’s central committee, resigned over the demolitions, which he described as “callous and inhumane.”

The demolitions have shocked the conscience of the world.  They contravene our basic concept of human dignity and international human rights.   Not least, the demolitions are a blatant violation of the right to adequate housing, as guaranteed under Article 11 of the International Covenant on Economic, Social and Cultural Rights, to which Zimbabwe is a signatory.

According to General Comments no. 4 (1991) and no. 7 (1997) of the U.N. Committee on Economic, Social and Cultural Rights, “Forced evictions are prima facie incompatible with the provisions of the Covenant and can only be carried out under specific circumstances.”  Evictions should never result in rendering individuals homeless, and it is the responsibility of the government to ensure that adequate alternative housing or resettlement is available for all those affected before executing an eviction order.

The regime’s violation of the rule of law is not limited to grabbing land or destroying homes.  It also practices torture.

In particular, citizens who sought asylum while abroad are frequently harassed and tortured after returning to Zimbabwe.

Following his deportation from the United Kingdom, Zuka Kalinga was interrogated immediately upon his return to Bulawayo.  According to the Observer, government officials repeatedly questioned Mr. Kalinga on the whereabouts of his father, who was killed in 1982.  When Mr. Kalinga responded, “he disappeared,” a smiling guard replied, “Do you want to disappear too?”

Unfortunately, many have suffered far worse.  According to the Times of London, others have been tortured, including one man who gave detailed accounts of his subjection to electric shock treatment on his chest and testicles.  “We were punched on the head and neck and asked why we didnt have the right travel documents. Then four agents from what we took to be the Central Intelligence Organization appeared and we were moved to separate rooms. They kicked me and kept shouting that I was a British spy.”

These practices are an express violation of the Convention Against Torture, and the Universal Declaration of Human Rights.

Within Britain, civil society, the courts, and the British government are vigorously debating whether or not to continue deporting illegal immigrants back to Zimbabwe, because of the dangers they face.  It is now time for the international community to speak out, and to consider measures which can assure that Zimbabwe ceases to commit torture against its citizens.

The hundreds of thousands made homeless and hungry by the Zimbabwe government cannot wait until the next session of the Commission in March.  The Sub-Commission has before it an urgent crisis that is both humanitarian disaster and human rights crime.  The extensive and damning report by the U.N.’s special envoy was issued as we began this session.  The Sub-Commission has the legal and moral duty to condemn these crimes under international law.  Those who accuse this body of being ineffectual can be proven wrong.

According to a report by CNN, President Mugabe, recently visiting Beijing, expressed confidence that China will use its veto power in the Security Council to protect Zimbabwe from any U.N. censure.

No state holds veto power in this assembly of independent experts.  If you don’t speak out for the victims of Zimbabwe’s government, who will?