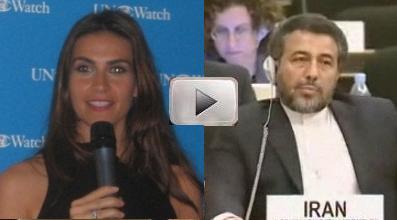 Madam High Commissioner, thank you for calling attention to victims of torture.  My father was tortured, by a vicious regime. I know what it means.

Thank you for spotlighting discrimination in Tibet; the violation of women’s rights in Sudan; and the shooting of human rights defenders in Russia.

Thank you also for putting a spotlight on the Islamic Republic of Iran: its fraudulent elections in June, brutal arrest of peaceful protesters, murder of Neda and other innocents, and rape of female and male detainees.  Detailed evidence of these horrific crimes was released this week by opposition leader Mehdi Karroubi.

This is the government that tortured my father. And sitting next to me is Ahmad Batebi. They tortured him for 9 years, for attending a student protest.

This is the government that has at least 160 juveniles on death row, in violation of Article 3 of the Universal Declaration of Human Rights, Article 6 of the International Covenant on Civil and Political Rights, and Article 37 of the Convention on the Rights of the Child.

Madam High Commissioner, you spoke of human rights, courage and political will.

Mr. Batebi and I here today to present this appeal by 50 Iranian human rights defenders.

We urge you to call for an immediate Special Session of this Council, to investigate Iran’s gross violation of all basic human rights, and to take action to protect the victims.

After June, the world knows: President Ahmadinejad does not represent the people of Iran.  The people of Iran want freedom, democracy, and human rights.  The abuses are getting worse and worse by the day.  There’s no time to spare. Please, we need your help.

Mr President, in exercising the right of reply, initially I would like to reply to the references in the statements made by Sweden yesterday on behalf of the EU, as well as France and UK concerning the developments relating to the recent presidential election in Iran.

First and foremost, I should reiterate that the unbalanced and biased vision towards country situations in the world, prevailing in the aforementioned statements, has led to the stereotyping the situation in my country, while there are a lot of verily alarming human rights situations across the world, including among EU countries.

This negative approach, which is politically motivated, deprives one to gain a balanced constructive and inclusive attitude toward human rights. That’s why an outstanding 85% turnout of the Iranians in the recent pres’l election and compet election debates have not caught aan eye among these few countries.

Furthermore, the cause for releasing the detainees involved in the events subsequent to the election without mentioning the due process of law again shows a non-constructive approach towards human rights in a country.

Mr. President, what we really need is a change in such negative and non-constructive approaches.

Finally, with regard to the statement made by the UN Watch this morning, my delegation, while rejecting the unsubstantiated allegations therein, would like to remind the pertinent rules of procedures which stress accuracy and decency in addressing human rights issues before this august body.

Ahmed Batebi was imprisoned in 1999 for appearing at a Tehran student demonstration, and tortured for 9 years. The Economist magazine published the iconic photo of Batebi, holding the bloodied t-shirt of his injured friend, on its front cover, making him one of the world’s most famous political prisoners, and provoking retaliatory abuse from the Iranian prison authorities.

Sponsored by UN Watch, Batebi appeared before the Council this week together with Nazanin Afshin-Jam, a former Miss Canada who is founding president of Stop Child Executions, a group advocating for children on death row in Iran.  Their joint appeasl follows below.

Shocked and anguished by the tyranny, oppression, and gross human rights violations perpetrated by the Islamic Republic of Iran since the fraudulent June elections;

Recalling that the Universal Declaration of Human Rights guarantees the right to life, liberty and security of person, freedom of opinion and expression, freedom of peaceful assembly, and the democratic right to participate in genuine elections;

Recalling further that the Universal Declaration of Human Rights prohibits torture and cruel, inhuman or degrading treatment or punishment, arbitrary arrest and detention,

Reiterating the July 2, 2009 call by Iranian and international human rights activists for the U.N. Secretary General to name a Personal Envoy for Iran to investigate the post-election violence in Iran, to complete his report on the human rights situation in Iran, due at the 64th session of the General Assembly;

We hereby call upon you to lead the United Nations and the international community in convening an urgent and immediate Special Session of the U.N. Human Rights Council on the grave violations of international human rights law in Iran since the fraudulent June elections, and, in that context, for the Council to establish an independent, international and impartial commission of inquiry to investigate:

• The complicity of Iran’s senior leadership, including Supreme Leader Ayatollah Ali Kahmenei and President Mahmoud Ahmadinejad, in perpetuating massive election fraud, followed by the brutal arrests, beating and killing of peaceful demonstrators by the Basij and other government forces, including the deadly June 20, 2009 shooting of 27-year-old Neda Agha-Soltan;
• Torture and abuse of defendants following their arrest, with credible reports of rape of women and male detainees by security officials, including the rape and killing of Taraneh Mousavi and the rape of Ebrahim Sharifi;
• Specific allegations of gross abuse raised by Mehdi Karroubi and others concerning the Kahrizak detention center, which have been partially acknowledged by Iranian Supreme Leader Ayatollah Ali Khamenei;
• The show trials of more than 100 Iranians designed to delegitimize the mass and peaceful protests following the June elections;
• Secret burials of dead protesters in Tehran’s Behesht Zahra cemetery and other locations;

Mindful of the precedent shown by former Secretary-General Kofi Annan in 2006, when he successfully led the international community in calling for a special session of the Human Rights Council on Darfur, we now look to your moral leadership to give hope to the millions seeking human rights, freedom and justice in Iran.