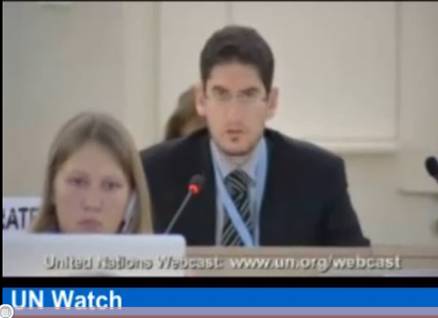 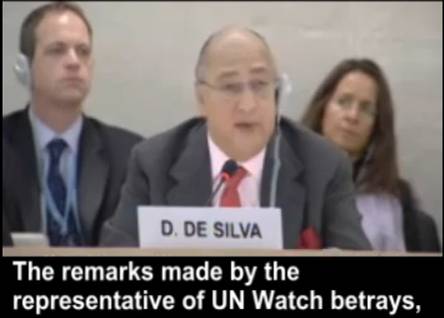 GENEVA, October 6 – The U.N. commission into Israel’s May 31 flotilla clash declared during a recent U.N. Human Rights Council debate that “even if Bin Laden himself were on the Mavi Maramara, Israel’s blockade would still be illegal.”

The statement was made by U.N. commissioner Desmond de Silva in response to questions posed in the council plenary by the Geneva-based UN Watch as to why the probe’s report ignored voluminous evidence it had submitted on the stated intentions of the Islamist flotilla members to physically confront Israel and become “Shahids,” or martyrs.

The chair of the flotilla probe, Judge Karl T. Hudson-Phillips, said that he had never heard the term “Shahid” before. Nevertheless, he insisted that the intentions of the IHH activists carried no legal relevance.

It is astonishing that the U.N. panel openly admitted to disregarding UN Watch’s evidence as to the violent, Jihadist and suicidal intentions of the IHH militants on the Mavi Marmara. That the head of the probe said he never heard the word ‘Shahid’ before means that he never even looked at the numerous video testimonies and other compelling evidence that UN Watch submitted to his inquiry.

Contrary to the U.N. commissioners’ attempt to downplay this evidence, the truth is that the entire interpretation of the facts hinges on who was the aggressor, and whether Israel’s soldiers attacked peaceful activists or instead acted in self-defense in face of a violent mob seeking to lynch them.

The declared intentions and state of mind of the passengers is highly relevant. Indeed, the U.N. report itself touches on the question of whether the passengers’ purpose was humanitarian or political. Evidence that seven of the nine passengers killed in the clash had previously declared their intent to become ‘martyrs’ is something the inquiry obviously should have examined, yet failed to do so.

Moreover, while UN Watch submitted over 40 items (see submissions here)—whose receipt the U.N. duly acknowledged—the commission chair said that he looked at only “two references.” UN Watch is calling on the Chair of the Human Rights Council to urgently investigate the U.N. inquiry’s serious breach of due process.

UN Watch wishes to thank the Mission for acknowledging yesterday that Resolution 14/1, which created the flotilla probe, contained, “apparent predeterminations;” and that, “the tenor and wording of the preambular and operative parts of the resolution indicate a certain bias.”

We also thank the Mission for urging this council that, “greater care should be taken not to give the appearance of prejudgment of matters to be investigated.”

In light of the council’s long and well-known record on such matters, we would be interested to hear the Mission’s views on the reasonable likelihood that this change will occur; and whether the Mission has any concerns that its work has aided and encouraged—and is now in the hands of—those who, in the Mission’s own words, resort to bias, predeterminations and prejudgments.

Mr. President, we turn now to the report. UN Watch submitted a substantial amount of relevant evidence to the Mission. Why was it disregarded by the report?

In particular, numerous items documented the Jihadist intent and actions of the IHH militants on the ship. One report showed that seven of the nine passengers killed had declared they wanted to die as “shahids.”

The evidence included the following interview of one of the passengers:

“When I went on the first convoy I wanted to be a shahid. I wasn’t that lucky. Second time wanted to be a shahid. Didn’t work. Third time lucky, Inshaala, I will be a shahid… So I’m not worried. If Israelis dare and try to fight us, we’re going to give them a really good fight. Let them try. We [will] show them who we are, because we are Muslims, we not scared to die. And I know, for a fact, they love to live.”

All of this is probative to what really happened, to the true nature and intentions of the so-called humanitarians.

How is it, then, that the words “martyr” and “Shahid” feature nowhere in the report?

… With respect to UN Watch, I want to assure them that we took into consideration the two references they referred us to, which were a Panorama program and information contained in the Turkel report, with which we were already familiar. We alluded to the fact in our report that we paid particular attention to eyewitness reports.

In any event, I’ll merely make the comment that the mere fact that somebody wants to be a “Shahid”—and that is a term which is new to me, because where I come from we don’t know this term—but the mere fact that somebody wanted to be a “Shahid,” was not an excuse for making them realize their ambitions so to be, by the summary execution that we found. I have no further report.

We have approached our task that the council gave us the opportunity to do with the view to seek the truth within the context of the law, and it’s very easy to make a wishy-washy report so as to avoid the wrath of the criticized government or its friends.

I was most interested to hear the observations that the learned chairman of the mission has just dealt with, namely the observations by UN Watch. The remarks made by the representative of UN Watch betrays, I am afraid to say, a fundamental and undenying ignorance of the law.

Great store is placed on the fact that there were people on board the Mavi Marmara who declared, perhaps with some bravado, that they were willing to die. But where was the imminent threat toIsrael? Well of course we found a photograph of somebody with a catapult, in the course of making our inquires. No doubt that catapult was there to sink one of the two Israeli submarines that were part of the naval force. Indeed, to reemphasize what my colleague Judge Hudson-Phillips has said, is this: even if Bin Laden himself was on board the Mavi Marmara it wouldn’t have made the blockade legal.

In the same way as we have found that Israel has acted unlawfully in this instance, it is right to say that every time that Hamas fires a rocket aimlessly into Israel, that organization also commits war crimes. I hope that in the not too distant future that the peace will descend upon troubled lands and upon troubled peoples. That’s all I wish to say.