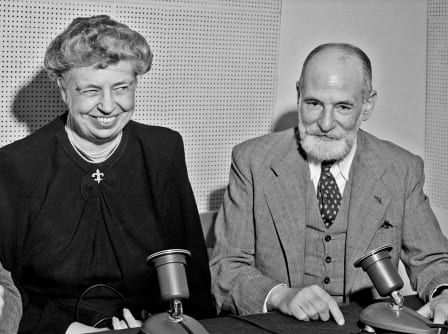 Up above, Eleanor Roosevelt and Rene Cassin—architects of the Universal Declaration of Human Rights, and great supporters of Israel—are smiling.
Because today, as the world marks the 65th anniversary of their Declaration, for the first time in history Israel can join the observance of Human Rights Day, as an equal member of the UN Human Rights Council’s regional group system, participating in a basic consultation and nomination process just like every other UN member state.

After decades of discriminatory exclusion—and months of tense negotiations with European countries—Israel last week was finally accepted into one of the council’s regional groups, that of the Western European and Others Group (WEOG).

This puts an end to a fundamental injustice—sadly, only one among many—inflicted by the world body against the Jewish state.

The other late UN human rights figure who is smiling is Sergio de Mello, the high commissioner who was murdered in Iraq in 2003.

For UN Watch, this rare diplomatic victory is a milestone moment in our struggle to uphold the equality principle guaranteed under the UN Charter.

Since our founding 20 years ago, UN Watch fought tirelessly for Israel’s acceptance into the Western group. In hundreds of meetings, we lobbied diplomats and senior officials in Geneva, Paris, London, Berlin, New York and elsewhere.

UN Watch authored the definitive legal brief arguing for Israel’s admission to WEOG; waged a public education campaign that included a major advertisement in the International Herald Tribune; organized a global petition, sending hundreds of messages to the EU’s Catherine Ashton; and made the case again and again in hundreds of UN statements, op-eds, and public speeches.

Persistence, diligence and faith were finally answered by this signal achievement.

UN Watch pays special tribute to the devoted diplomats from Canada, Britain, France, Germany, the U.S., Australia, and of course Israel, who played a key role in the diplomatic victory.

Does this mean that UN bias against Israel, and specifically at the Human Rights Council, is over?

First, it was not the UN or the council that admitted Israel this week, but rather a group of Western democracies. The regional group that under the UN’s geography-based system should have accepted Israel was the Asian Group. But out of hatred and spite, Arab countries like Saudi Arabia and Syria, and Islamic countries like Iran and Pakistan, have barred the Jewish state from exercising its basic rights of participation as a sovereign UN member state. Wrongly, no UN official has ever called out the Asian states on their diplomatic bigotry.

Second, the UN as a whole continues to be poisoned with anti-Israel bias. By the end of this year, to give one example, the UN General Assembly will have condemned Israel in 21 resolutions—with only 4 on the rest of the world combined.

Third, the Human Rights Council continues to institutionalize prejudice with its anti-Israel agenda item built into every one of its meetings. Disproportionately, the council continues to target Israel with one-sided resolutions, emergency sessions, and fact-finding missions. And Richard Falk, the council’s permanent and pro-Hamas “expert on Palestine,” carries on his self-declared “Legitimacy War” against the Jewish state.

Today, we should justifiably celebrate a historic victory against inequality, bigotry and discrimination, and at the same time reaffirm our commitment to struggle—as Eleanor Roosevelt, Rene Cassin, and Sergio de Mello did—against the many gross injustices that remain.