Issue 485: Outspoken Israel critic said likely to replace Richard Falk as rights monitor — Dictatorships Tried to Silence UN Watch's Hillel Neuer: 'He Should Not be Given The Floor'

2. Dictatorships Tried to Silence UN Watch’s Hillel Neuer: ‘He Should Not be Given The Floor’

Indonesia’s former UN envoy is reportedly slated to become the next UN Human Rights Council monitor on Palestinian issues, but his objectivity is being questioned 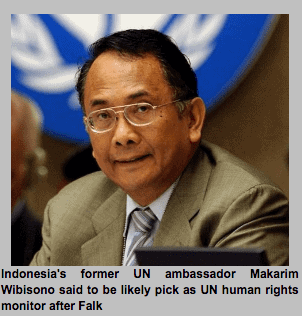 GENEVA, March 27, 2014 – According to an exclusive report by the Geneva-based UN Watch monitoring group, diplomats report that the UN Human Rights Council president, under intense lobbying from Arab states, is planning to reject a U.S. academic who was vetted to become the next human rights monitor for the Palestinian territories, and instead give the high-level post this Friday to Indonesia’s former UN ambassador, Makarim Wibisono.
Despite a unanimous recommendation submitted to the president by the UNHRC’s 5-member vetting committee, Arab states have threatened to veto the appointment of Georgetown University law school lecturer Christina Cerna.
In her application, Cerna said she wanted to “[work] towards the ending of the occupation,” which involves “humiliation and anger.”
Nevertheless, in a series of letters to the UNHRC president seen by UN Watch, the Arab League is vehemently objecting that she does not have a prior record of statements on Palestinian issues.
“The core issue, to be sure, is not the nominees, but the biased position itself,” said UN Watch executive director Hillel Neuer.
“This is the only country mandate that looks not at a given region but at only one side, with the specific instruction to investigate ‘Israel’s violations of international law’ in the territories, while completely disregarding human rights abuses against women, Christians and dissidents that are being committed by Hamas, Fatah, Islamic Jihad or others.”
At the same time, UN Watch expressed “serious questions” about Wibisono’s satisfaction of the post’s objectivity requirement.
In addition to having long represented a government that rejects any official diplomatic relations with Israel, Wibisono went to Gaza in 2010 to show support for Ismail Haniyeh, the leader of the Iranian-backed Hamas terrorist organization.
Wibisono has also demonstrated a disconcerting pattern and practice of one-sided and inflammatory statements targeting the Jewish state:

The outgoing UN rapporteur, Richard Falk, was condemned by UN chief Ban Ki-moon for promoting the writings of 9/11 conspiracy theorists.

Authoritarian States at UN Rights Council Try to Silence UN Watch’s Hillel Neuer: ‘He Should Not be Given The Floor’

By Patrick Goodenough
(CNSNews.com) – At a session of the U.N. Human Rights Council on Monday, some of the council’s most authoritarian members tried one by one to get the chair to silence a speaker who evidently was embarrassing the Palestinian delegation.

The representative for the “State of Palestine” himself three times interrupted the speaker, and was then supported by agitated delegates from Saudi Arabia, Cuba, Algeria, Pakistan, Venezuela and Morocco.
Liberal democracies and human rights campaigners consistently denounce the presence of countries with poor human rights records on the U.N.’s top human rights body, but a majority of U.N. member-states continue to usher them into the HRC in elections each year.

Saudi Arabia, Cuba and Algeria are designated “not free” by the democracy watchdog Freedom House, while Pakistan, Venezuela and Morocco are graded “partly free.”

Monday’s incident in Geneva occurred during a session in which national delegations and accredited NGOs discussed the final report of Richard Falk, the council’s “special rapporteur on human rights in the occupied Palestinian territories.”

Falk, an international law scholar at Princeton, has been arguably the most controversial expert ever appointed by the HRC. His harsh critiques of Israel, musings about an “apparent cover up” over the 9/11 terror attacks, and suggestions that the Boston Marathon bombing was an understandable consequence the “American global domination project” prompted calls by the U.S. government and others for his removal.

U.N. Secretary-General Ban Ki-moon himself criticized Falk and described his 9/11 remarks as “preposterous,” but said his hands were tied as the scholar had been appointed by the HRC, not the U.N. secretariat.

Now Falk is leaving, having served the maximum allowed six years, and on Monday he presented his final report to the HRC in Geneva.

The member state representatives who spoke during the session – the vast majority of them Islamic nations – universally praised Falk. But during the NGO segment some delegates reproached him.

Israel’s antipathy to Falk is well-known: Israel prevented him entry after Falk accused it of war crimes. But U.N. Watch Executive Director Hillel Neuer in his statement pointed out that the Palestinian Authority also had been displeased with Falk, and even tried to get him fired for being supportive of Hamas. (Hamas and P.A. Chairman Mahmoud Abbas’ Fatah are longstanding rivals.)

Neuer began reading from a 2010 U.S. diplomatic cable, one of the trove leaked by Wikileaks, in which U.S. diplomats reported on the P.A.’s expressed dissatisfaction with Falk.

Palestinian envoy Ibrahim Khraishi interrupted, asking the chair to call the speaker into line.
The chair, Baudelaire Ndong Ella of Gabon, asked Neuer to stick to the item under discussion, Falk’s final report.

Neuer continued, and twice more was interrupted by Khraishi, who told Ndong Ella, “Perhaps that is how he [Neuer] speaks to his counterparts, but in this forum he must be forbidden from speaking.”

Then other delegations stepped in:

—Saudi Arabia asked the chair “to be firmer.”
—Pakistan said that HRC-appointed experts “should not face undue criticism from those who just want to malign their given mandate.”
—Cuba said if the NGO did not respect the council rules, “we must stop it from continuing.”
—Venezuela said, “We believe that he should not be given the floor.”
—Algeria and Morocco both supported Khraishi’s complaint, and the Saudi envoy made one further point, requesting that the report on the session “make no mention of the statement that we have just heard from that NGO.”

“Richard Falk embodies all that is twisted at the U.N.,” Neuer said from Geneva late Monday. “He’s an educated Western academic who is captivated by anti-Western politics. That odd breed will always find a welcome home at the U.N.”

“I didn’t think it was right for him to leave on a positive note as many hoped. Delegations had no problem praising Falk, but apparently they wouldn’t let me quote criticism of him from [the diplomatic cable leaked by] Wikileaks.”

After Praising Sri Lanka for Killing 40,000 Civilians, The U.N. Must Atone
Canada AM: Ti-Anna Wang fighting for father’s freedom