Issue 557: "A great evil has been loosed upon the world"

UN Watch pays tribute to the two great UN ambassadors whose eloquent speeches in the Nov. 10, 1975 debate are remembered more than anything said by the Soviet or Arab delegates who sponsored the resolution, which itself was repealed in 1991 following the demise of the Soviet Union. Today we feature the speech by Ambassador Daniel Patrick Moynihan; tomorrow, that of Ambassador Chaim Herzog. 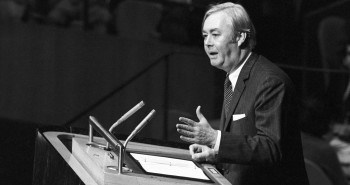 The United States rises to declare before the General Assembly of the United Nations, and before the world, that it does not acknowledge, it will not abide by, it will never acquiesce in this infamous act.

Not three weeks ago, the United States Representative in the Social, Humanitarian, and Cultural Committee pleaded in measured and fully considered terms for the United Nations not to do this thing. It was, he said, “obscene.” It is something more today, for the furtiveness with which this obscenity first appeared among us has been replaced by a shameless openness.

There will be time enough to contemplate the harm this act will have done the United Nations. Historians will do that for us, and it is sufficient for the moment only to note the foreboding fact. A great evil has been loosed upon the world. The abomination of anti-semitism — as this year’s Nobel Peace Laureate Andrei Sakharov observed in Moscow just a few days ago — the abomination of anti-semitism has been given the appearance of international sanction. The General Assembly today grants symbolic amnesty — and more — to the murderers of the six million European Jews. Evil enough in itself, but more ominous by far is the realization that now presses upon us — the realization that if there were no General Assembly, this could never have happened.

As this day will live in infamy, it behooves those who sought to avert it to declare their thoughts so that historians will know that we fought here, that we were not small in number — not this time — and that while we lost, we fought with full knowledge of what indeed would be lost.  …

The proposition to be sanctioned by a resolution of the General Assembly of the United Nations is that “Zionism is a form of racism and racial discrimination.” Now this is a lie. But as it is a lie which the United Nations has now declared to be a truth, the actual truth must be restated.

The very first point to be made is that the United Nations has declared Zionism to be racism — without ever having defined racism. “Sentence first — verdict afterwards,” as the Queen of Hearts said. But this is not wonderland, but a real world, where there are real consequences to folly and to venality.  …

What we have here is a lie — a political lie of a variety well known to the twentieth century, and scarcely exceeded in all that annal of untruth and outrage. The lie is that Zionism is a form of racism. The overwhelmingly clear truth is that is it not.

[Here Moynihan discusses at length how the Jewish people includes individuals of different colors and ethnic origins, and that converts become Jewish regardless of race.]

Now I should wish to be understood that I am here making one point, and one point only, which is that whatever else Zionism may be, it is not and cannot be “a form of racism.” In logic, the State of Israel could be, or could become, many things, theoretically, including many things undesirable, but it could not be and could not become racism unless it ceased to be Zionist.  …

The terrible lie that has been told here today will have terrible consequences. Not only will people begin to say, indeed they have already begun to say that the United Nations is a place where lies are told, but far more serious, grave and perhaps irreparable harm will be done to the cause of human rights itself. The harm will arise first because it will strip from racism the precise and abhorrent meaning that it still precariously holds today. How will the people of the world feel about racism and the need to struggle against it, when they are told that it is an idea as broad as to include the Jewish national liberation movement?  …

There is this danger, and then a final danger that is the most serious of all. Which is that the damage we now do to the idea of human rights and the language of human rights could well be irreversible.

The idea of human rights as we know it today is not an idea which has always existed in human affairs, it is an idea which appeared at a specific time in the world, and under very special circumstances. It appeared when European philosophers of the seventeenth century began to argue that man was a being whose existence was independent from that of the State, that he need join a political community only if he did not lose by that association more than he gained. From this very specific political philosophy stemmed the idea of political rights, of claims that the individual could justly make against the state; it was because the individual was seen as so separate from the State that he could make legitimate demands upon it.

But there are those of us who have not forsaken these older words, still so new to much of the world. Not forsaken them now, not here, not anywhere, not ever.

The United States of America declares that it does not acknowledge, it will not abide by, it will never acquiesce in this infamous act.