Annual ritual to see total of 20 resolutions on Israel, 3 on rest of world 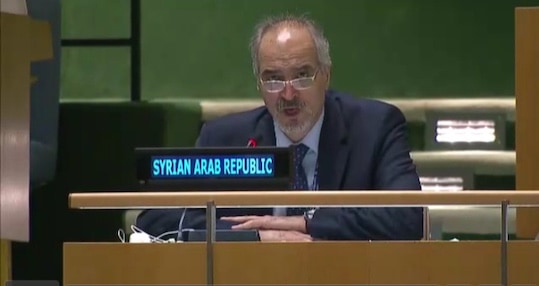 NEW YORK — As part of its annual ritual, the UN General Assembly on Tuesday adopted six resolutions singling out Israel for criticism — without any of mention of the relentless Palestinian knife attacks, shooting, car-rammings, and incitement, and without a single resolution adopted on Russia, Saudi Arabia, China, Cuba, Venezuela, or anywhere else.
In total for this year’s session, the UNGA is set to enact 20 resolutions against Israel, and 3 on the rest of the world combined, before it breaks for Christmas holidays.

Importantly, as also documented by UN Watch, Canada’s new government under Prime Minister Justin Trudeau has in its first votes this month quietly continued the same solid opposition to the biased UN resolutions as shown by the previous Harper government, joining the U.S. and Australia.
But the vast majority of countries, including EU member states for most of the resolutions, voted for the Palestinian-drafted condemnations.
At a time when not just France but numerous countries around the world are under assault by terrorists killing in the name of Islam and martyrdom — as Palestinians did this week while stabbing Israeli Jews — the UN’s surreal response is to reflexively condemn Israel in redundant, inflammatory, and one-sided resolutions.
One resolution, drafted every year by Syria, condemned the Jewish state for retaining the Golan Heights, demanding Israel hand the land and its people to Syria.
Oblivious to reality, the UN expressed grave concern over what it called “the halt in the peace process on the Syrian track.”
Oblivious to the fact that this track has been non-existent since Assad began massacring his own people and destroying his country, and that, understandably, Israelis may be less than enthusiastic at this moment in time to turn over the commanding heights to genocidal Assad or to genocidal ISIS, the resolution solemnly expressed “the hope that peace talks will soon resume from the point they had reached.”
Oblivious to the Sunni-Shiite civil war raging across the Middle East, engulfing Iraq, Syria, Iran, Lebanon, Yemen, and many other places, the resolution singled out Israel’s presence on the Golan as “the stumbling block in the way of achieving a just, comprehensive and lasting peace in the region.”
Oblivious to the fact that the Syrian regime is massacring its own people, causing millions to flee, the resolution absurdly called for more people to be subject to Assad’s rule, demanding that Israel “withdraw from all the occupied Syrian Golan.”
While the resolutions adopted this week claim to care about Palestinians, the U.N. proves itself oblivious to the hundreds of Palestinians who continue to be slaughtered, maimed and expelled by Assad’s forces.
The farce at the General Assembly underscores a simple fact: the U.N.’s automatic majority has no interest in truly helping Palestinians, nor in protecting anyone’s human rights; the goal of these ritual, one-sided condemnations remains the scapegoating of Israel.
The U.N.’s disproportionate assault against the Jewish state undermines the institutional credibility of what is supposed to be an impartial international body, and exposes the sores of politicization and selectivity that eat away at its founding mission, eroding the U.N. Charter promise of equal treatment to all nations large and small.
Social Media Impact
UN Watch Facebook posts reached more than 800,000 people this week. Click here to see why.
UN Watch also led the conversation on Twitter. Click here to see the lively exchanges.