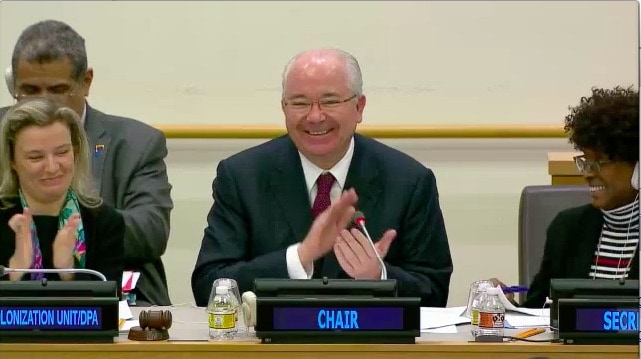 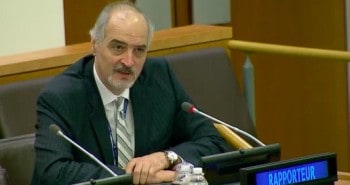 Top: Chair applauds UN election of Syria and other dictatorships.
Bottom: Syrian ambassador Bashar Ja’afari was hugged by the Chair and
invited to speak on the dais after his election as Rapporteur of the UN committee.
UN Watch broke the exclusive story here.
_______

UN Watch’s report was quickly picked up by editorial boards and media agencies; examples below. 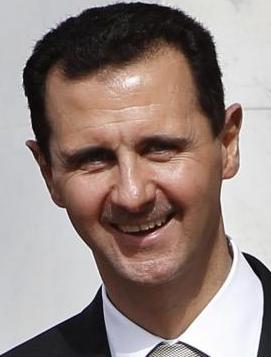 If the United Nations was trying to mock itself, it couldn’t have done a better job than it did this week, when it re-elected Syria’s ambassador to a top spot on its Special Committee on Decolonization.
The panel — set up in 1960 to push for the freedom of European colonies and to oppose “subjugation, domination and exploitation” — re-elected Ambassador Bashar Ja’afari of Syria as rapporteur.
That’s right: Syria — whose five-year campaign of murder against its own people has taken a toll nearing a half-million lives.
OK, UN panels of this kind are worse than useless. They regularly put foxes in charge of hen-houses — as when a UN women’s-rights board gave Iran a seat at its table in 2015.
Indeed, the decolonization panel also made Venezuela its chairman and Cuba a vice-chair, despite the horrific human-rights records of both regimes.
But Syria’s behavior makes an utter joke of the principles the panel was set up to uphold: “self-determination,” an end to “armed action or repressive measures . . . against dependent peoples” and respect for the “integrity” of national territory.
On each count, it would be hard to find a worse offender than Bashar al-Assad’s Syrian regime.
“It is incomprehensible for the UN on one day to lament the regime’s killing and wounding of hundreds of thousands of Syrians,” says UN Watch’s Hillel Neuer, “and to then hand this gift of false legitimacy to the mass murderer Bashar al-Assad.”
Neuer says the move will let Assad & Co. portray itself as a “human-rights arbiter.”
Which may actually be the entire, repugnant point of these UN committees.
___________
‘Incomprehensible’: UN Committee Elects Assad Regime to Leadership Post
By Patrick Goodenough
(CNSNews.com) – A group of United Nations’ member-states on Thursday elected the Assad regime to a leadership post of a special committee dealing with decolonization, sparking protests from a human rights group that had earlier urged U.N. secretary-general Ban Ki-moon to intervene.

At a meeting in New York, the committee’s newly-elected chairman, Venezuelan ambassador Rafael Ramirez, asked the member-states whether there were any objections to putting forward Syrian ambassador Bashar Ja’afari as its “rapporteur” for the coming year.

Hearing no objectives, Ramirez declared Ja’afari – as well as three nominated vice chairmen, the representatives of Cuba, Sierra Leone and Indonesia – “elected by acclamation.”
The Venezuelan then led “a round a applause for our friends,” told them he looked forward to working with them “in taking forward the noble work of the special committee,” and invited Ja’afari to take his seat on the podium.
Before the Syrian sat down, Ramirez – a former foreign minister in President Nicolas Maduro’s cabinet – gave him a hug.
According to U.N. estimates well over 250,000 people have been killed and 12 million displaced in the civil war in Syria.
U.S. taxpayers account for 22 percent of the U.N.’s regular budget.
The committee – full name, the Special Committee on the Situation with Regard to the Implementation of the Declaration on the Granting of Independence to Colonial Countries and Peoples – has 24 members.
Ten of them are free democracies, according to Washington-based Freedom House. They are Antigua & Barbuda, Chile, Dominica, Grenada, India, Indonesia, Saint Kitts and Nevis, Saint Lucia, Saint Vincent and the Grenadines, and Tunisia.
None of those 10, nor any other member of the committee, raised objections to Syria’s “election” as rapporteur.
Ahead of the election, the non-governmental organization U.N. Watch urged two of the democracies in particular, Chile and India, to oppose Syria’s election.
U.N. Watch executive director Hillel Neuer said after Thursday’s session the two governments should be “ashamed” for joining the consensus vote.
He also criticized Ban for not intervening ahead of the vote.
“It is incomprehensible for the U.N. on one day to lament the regime’s killing and wounding of hundreds of thousands of Syrians – to declare the regime guilty of ‘extermination’ of its own people – and to then hand this gift of false legitimacy to the mass murderer Bashar al-Assad,” Neuer said.
“Today’s U.N. vote only helps the Assad regime portray itself a U.N. human rights arbiter. That’s indefensible, and an insult to Syria’s victims,” he said. “Morally, Mr. Ban should do the right thing and at least condemn the decision.”
Neuer also called on U.S. Ambassador to the U.N. Samantha Power and European Union ambassadors to condemn what he called the “absurd and morally obscene” election outcome.
He said the elections of the Syrian and Venezuelan ambassadors to their respective posts would be “trumpeted by both the Assad and Maduro regimes” as a propaganda victory.
He recalled that the regime after a previous election of Ja’afari called it “yet another recognition by members of the committee of the Syrian important and key role.”
The decolonization committee, established in 1961, advocates independence for 17 specific territories around the world, including American Samoa, U.S. Virgin Islands and Guam.
Neuer called the 55 year-old body “anachronistic,” noting that it has often been “criticized as a costly irrelevance.”