GENEVA, Sept. 11, 2017 – United Nations Watch, the Geneva-based non-governmental human rights group, today presented Dr. Andres Roemer, the former Ambassador of Mexico to UNESCO, with its 2017 Eleanor Roosevelt Human Rights Award, at a ceremony held in Geneva, Switzerland, next to the United Nations human rights office.
Israel’s ambassador to UNESCO, Carmel Shama-Hacohen, addressed the ceremony to pay tribute to Roemer, as did Israel’s ambassador to the UN in Geneva, Aviva Raz-Shechter.

Dr. Roemer is a renowned public intellectual, humanitarian, and author of 16 books. Click here for bio.

In October 2016, while serving as his country’s representative to UNESCO, Roemer refused to obey instructions from Mexico City to vote for an Arab-drafted resolution that denied the Jewish and Christian heritage of Jerusalem, and which referred to the Temple Mount only with Islamic and Arabic names.

Instead, in an unprecedented move, Roemer stood up for his beliefs and walked out of the room. His principled defiance cost him his job, but ultimately Mexico changed its position, announcing its withdrawal of support for the biased resolution.

“It was personally moving to see you leave the room during the vote in order to actively avoid the vote against your conscience,” wrote Amb. Shama-Hacohen, Israel’s UNESCO ambassador, in October, who posted a photo of the two after the vote.

“I am at peace with what I did,” said Roemer, after meeting with Israeli Prime Minister Benjamin Netanyahu last month in Paris. “These votes do not have a place in an educational and cultural organization, and hurt us all.”

“It is now a great honor to receive this recognition and award from UN Watch, a leading voice for human rights,” added Roemer.

The Eleanor Roosevelt Human Rights Award, named for the founding chair of the UN Commission on Human Rights, honors public figures who have shown uncommon courage in defense of the founding principles of the United Nations.

“Dr. Roemer’s dissent on the distorted Jerusalem resolution was a courageous act of resistance against the perversion of UNESCO’s founding mission to protect world heritage,” said Hillel Neuer, executive director of UN Watch.

“Andres Roemer’s act of defiance exemplifies the principles of Eleanor Roosevelt, and of the UN Charter’s guarantee of equal treatment for all nations. When the UN in the 1960s began to target Israel with one-sided resolutions, Eleanor Roosevelt spoke out.” 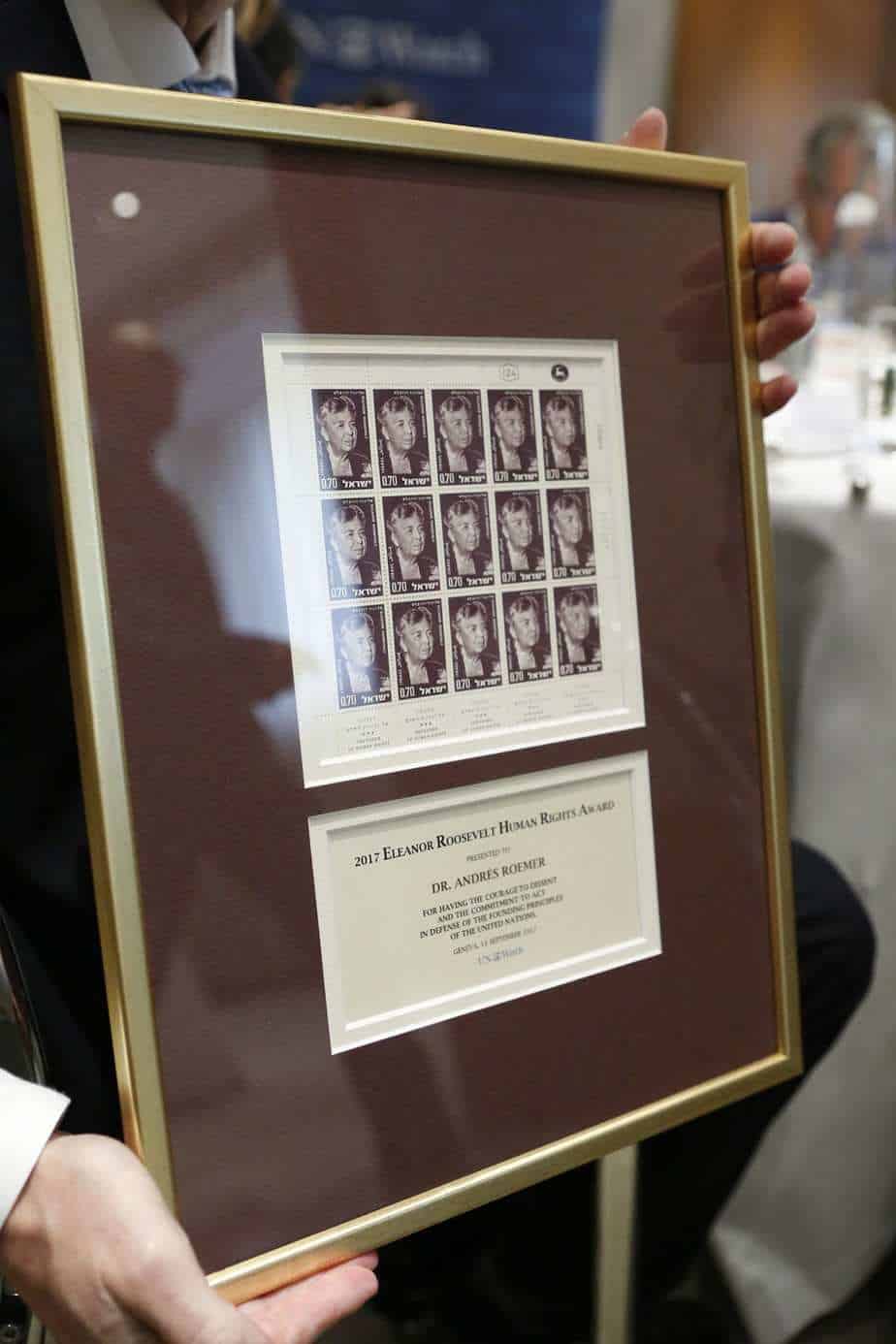 “Israel needs to be treated like any other UN member state,” said Guterres in March. He added that “the modern form of antisemitism is the denial of the existence of the State of Israel.”

In January, after UNESCO’s vote, Guterres said that it is “completely clear that the Temple that the Romans destroyed in Jerusalem was a Jewish Temple.”

The inaugural Eleanor Roosevelt Human Rights Award was given to former Canadian Foreign Minister John Baird, at a ceremony held at the historic Roosevelt House in New York.

“Mexico issued an official announcement that it will change its position, which for the past five years supported the Palestinian resolution. Regrettably our central partner in this change of position will pay for this with his head and will be replaced. An occasion to say to this wonderful man, who last week—out of conscience as a Jew and as a human being—refused to vote according to the instructions he received, and instead left the hall: In the name of the State of Israel, thank you, Mr. Ambassador!”
—Israeli Ambassador Carmel Shama-Hacohen, Oct. 18, 2016

Does OHCHR Enable China's Harassment of Dissidents?
Diego Arria calls on ICC to indict Venezuela's Maduro for 'crimes against humanity'